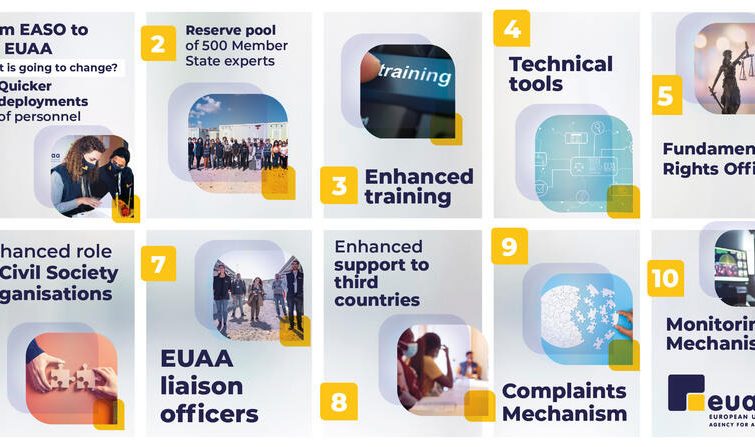 The European Union Agency for Asylum (EUAA), which replaces the European Asylum Support Office (EASO) with a reinforced mandate, starts its work today, 19 January. Its creation was agreed on by the European Parliament, Council and Commission as part of the planned reform of the Common European Asylum System (CEAS). The Agency’s new reinforced mandate provides for: the rapid deployment of operational assistance to Member States; the establishment of a “permanent reserve” of 500 Member State officials at the disposal of the Agency; the opportunity to set up training courses and to make tools and information available to national authorities; a network of liaison officers; and the establishment of a complaints mechanism to ensure recourse for anyone who considers that their fundamental rights have been breached and of a Monitoring Mechanism in the coming years. The new Agency automatically absorbs the Management Team and Management Board of EASO, starting with its Director Nina Gregori, and a 2022 budget of €172 million. “This is a crucial moment for asylum and reception in the EU”, Ms Gregori stated, and the establishment of the Agency is key to “tangibly improving the application of the world’s only multinational asylum system”. The establishment of the Agency will “act as an enabler for progress” of other asylum and migration reforms.

Romania: Week of Prayer for the Unity of Christians. Mgr. Perca to SIR, “we don’t lose heart. We keep praying wholeheartedly”