It’s a disaster in Rhineland-Palatinate. “Unequalled damage, many people have lost all they had, the number of victims is increasing, we are worried about the missing people”. This is what can be read this morning on the official website of the Land, led by Malu Dreyer. So far, 59 people are assumed to have died in this Land, over 80 in Western Germany, but the figure is not final yet. Over one thousand people are missing, not least because lots of areas have no electricity or telephone lines. One of the areas that has been most severely affected is Bad Neuenahr-Ahrweiler, where the river Ahr burst all its banks and brought destruction. Over 1.000 families have nowhere to stay any more, father Jörg Meyrer, the parish priest of the deanery, told the news agency Kna. “Our three churches are no longer usable, even if this is not the most important thing. The situation in town is catastrophic”. The Red Cross is there for first-aid assistance, and father Meyer is working with the volunteers: “People come here, wearing what they have. And everywhere is wet. Many ground-floor flats have been completely flooded and destroyed”. However, solidarity has begun: many are the volunteers who are helping, helpful are the people who, in the neighbouring cities, have opened the doors of their homes to put up the people who have been left roofless. “I feel great affection from the volunteers and above all great helpfulness”, father Meyrer told. “People here need a prospect. But they probably won’t find any for some time”, yet, “despite all this, I am sure the valley will pull through. People are very united in solidarity. But it will take a long time and it will have a deep impact”. 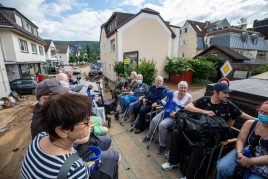 Germany: Mgr. Schick (Archbishop of Bamberg), “prayers for the dead and desperate, for reconstruction and care of creation”