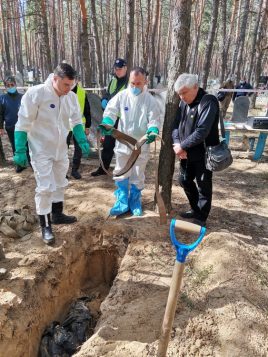 “An emotionally very difficult moment”. “Even if I know this is a war, which always causes victims, what I was deeply touched by, in Izyum, are the 50 soldiers, policemen, young men who exhumed such bodies. They did it with deep respect and in perfect silence …”. That moment felt “overflowing with praying. Even I would say it was a Holy Mass, after Holy Mass”. This was written by card. Konrad Krajewskion on the portal of the diocese of Kharkiv-Zaporizhia, where he tells about the stop that yesterday took him and bishop Pavlo Honcharuk to Izyum, a city 200km from Kharkiv, where a mass grave with at least 400 bodies in it was found in a wood. “Today has been a very difficult day”, the cardinal writes. “Bishop Pavel and I went to Izyum, where so many people were killed and are now being exhumed. A place where the bodies of people tortured and killed out of hatred are being taken out”. The cardinal, who came here “on a mission” on Pope Francis’s behalf, was deeply impressed at the care with which the police is carrying out such job. “It felt as if they were digging out their own beloved ones”, he writes. 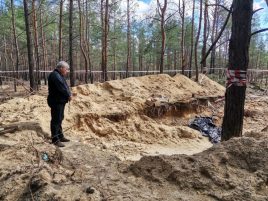 “I was deeply moved by it, because, despite the danger of the rockets that is taking place there, they brought the most beautiful thing out of themselves, a great respect for the deceased. I was deeply touched, because war is brutal and cruel, but those showed what is most beautiful in a man: great respect, gentleness and love for someone else. Because this is precisely how love for one’s neighbour is expressed. This day has been deeply evangelical, because we paid tribute to people who died in tragic circumstances. We felt no hatred, no resentment for those who did it. There was only a deep wish to give those people a dignified burial”.

Ukraine: card. Krajewski about the Izyum mass grave, “war is brutal and cruel” but “I was touched at seeing those bodies exhumed with deep respect and in perfect silence”