Council of Europe: conference on interreligious dialogue. “The religious dimension as key to intercultural dialogue”

(Strasbourg) “Interreligious dialogue on religion and peace, religion and human rights”: this is the name of the international conference taking place in in the premises of the Council of Europe in Strasbourg today, under the auspices of the Italian Presidency of the Committee of Ministers of the CoE. The conference will be opened by Michele Giacomelli, ambassador, on behalf of the Italian Presidency (that after six months will end this May), and by Bjorn Berge, deputy secretary general of the CoE. Then, a report will be given by mgr. Heiner Bielefeldt, professor at Erlangen University, who also wrote the UN report on freedom of religion. The meeting will be attended by delegates of different religions who will engage in a debate. This will be followed by the speech of Azza Karam, secretary general of “Religions for Peace”. The conclusions will be drawn by Fabio Petito, director of the Freedom of Religion or Belief Initiative at the Council of Europe. 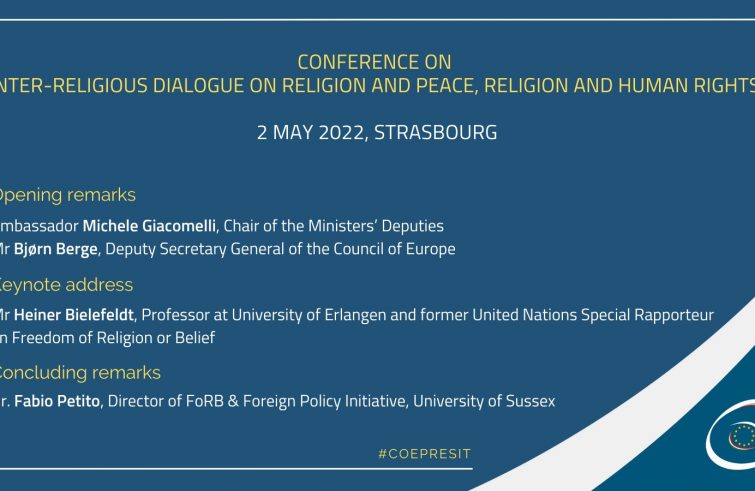 Council of Europe: conference on interreligious dialogue. “The religious dimension as key to intercultural dialogue”

Future of Europe Conference: 325 final proposals to be delivered to institutions on 9 May; consensus and expectations for the reforms to be implemented

Council of Europe: conference on interreligious dialogue. Faiths, peace, human rights: a talk with experts and communities of believers