A total of 67,040 migrants reached Italy by sea in 2021, almost twice as many compared to the previous year ( 34,154). Yet these figures are nevertheless far smaller than those of the Ukrainian refugees that entered Italy over the past few weeks. This shows that reception - and a successful one at that - is possible without claiming that an invasion is underway. Meanwhile, in 2021, some 17,000 migrants were welcomed at the Astalli Centre Refugee Service, 10,000 of them in Rome. The annual Report was presented on Tuesday in Rome

The refugees from Ukraine who arrived in Italy over the last few weeks – 89,920 people (UNHCR data) – are far more than the total number of migrants and asylum-seekers who reached the country in 2021. The ongoing war in Ukraine has demonstrated that their presence is neither “an invasion nor a threat to our security”, states the Astalli Centre in its 2022 annual Report on the situation of refugees in Italy, in a new edition marking its 40th anniversary this year. The Report clearly denounces: “The plight of migrants are no longer a news story, but abuses in Libya, deaths at sea and indiscriminate push-backs at borders have never stopped.” In fact, as many as 67,040 migrants arrived in Italy by sea in 2021, nearly twice as many compared to the previous year (34,154). There were also twice as many unaccompanied minors – 9,478, as opposed to 4,687 in 2020. The Report shows that “the socio-economic impact of the pandemic has exacerbated refugees’ vulnerabilities and has increased marginalisation.” Moreover, despite the fact that the security measures have become obsolete two years ago, “we are still unable to overcome an emergency rationale.” Cardinal Jean-Claude Hollerich, president of the Commission of European Bishops’ Conferences ( COMECE), and Father Camillo Ripamonti, president of the Astalli Centre, were among the speakers at the Report’s presentation today in Rome. 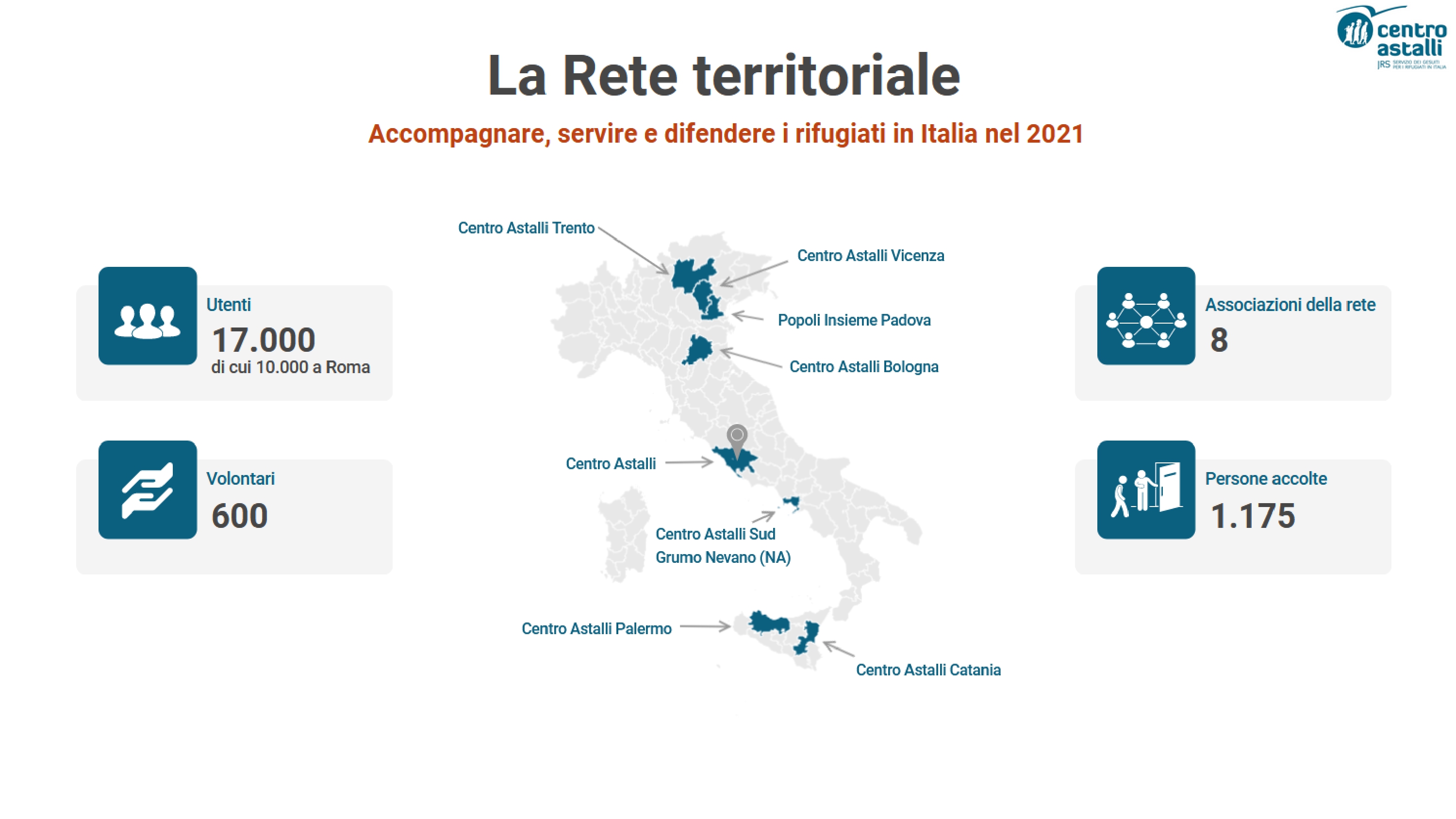 A total of 17,000 refugees welcomed in 2021. A total of 17,000 refugees were welcomed at the Astalli Centre – the Italian headquarters of the Jesuit Refugee Service – in 2021, 10,000 of them in Rome (there are another seven centres in Bologna, Catania, Grumo Nevano, Palermo, Padua, Trento and Vicenza). Forty-six thousand meals were distributed, an average of 190 per day. The refugees are cared for by a total of 600 voluntary workers and 54 staff. There were 7% more refugees from Somalia, states the Report. In addition to its first and second level reception services, Astalli Centre organises educational activities on asylum rights and inter-religious dialogue in schools to increase awareness on this issue, with a total of 20,330 students participating last year across 17 Italian cities.

“Rejectionist bureaucracy” and social precariousness. Immigration registry for immigrants is a major barrier for asylum seekers seeking international protection.  According to the Report, “the digitisation of numerous agencies has made the lives of forced migrants all the more burdensome.” A ”rejectionist bureaucracy” is further hampered by pandemic containment measures, failing to “take into account the difficulties faced by the most vulnerable persons.”

The vaccination campaign has also required private social services’ assistance to reach out to the most disadvantaged members of society. The Astalli Centre in Palermo became a vaccination hub. And Catania’s healthcare branch acted as a reference point for all those who, despite being vaccinated, were unable to obtain a green pass because they lacked a national healthcare card. The Astalli Centre voiced its concern because

“such obstacles, whether bureaucratic or organisational, end up excluding those who have the greatest need to feel included and welcomed.”

No to the ‘emergency rationale’. To this day, almost two in three migrants are still housed in extraordinary reception facilities – CAS. Italy’s System of reception and integration (SAI) involves small numbers and targeted integration projects for refugees, but it only accommodates approximately 25,000 on a total of 76,000 people housed in authorised facilities. A total of 1,175 people were hosted in the extraordinary reception centres in Trento, Padua, Grumo Nevano (Na) and in the SAI centres in Rome, Bologna, Trent, Vicenza and Palermo in 2021, run by the Astalli Centre. The number of unaccompanied foreign minors hosted in their facilities and under their care is also on the rise. “This is a particularly vulnerable group for which the State frequently fails to guarantee specific and protected assistance”, the Report underlines. It is hoped that the integration-oriented SAI network “will soon become the only reception system for international protection holders and seekers.” 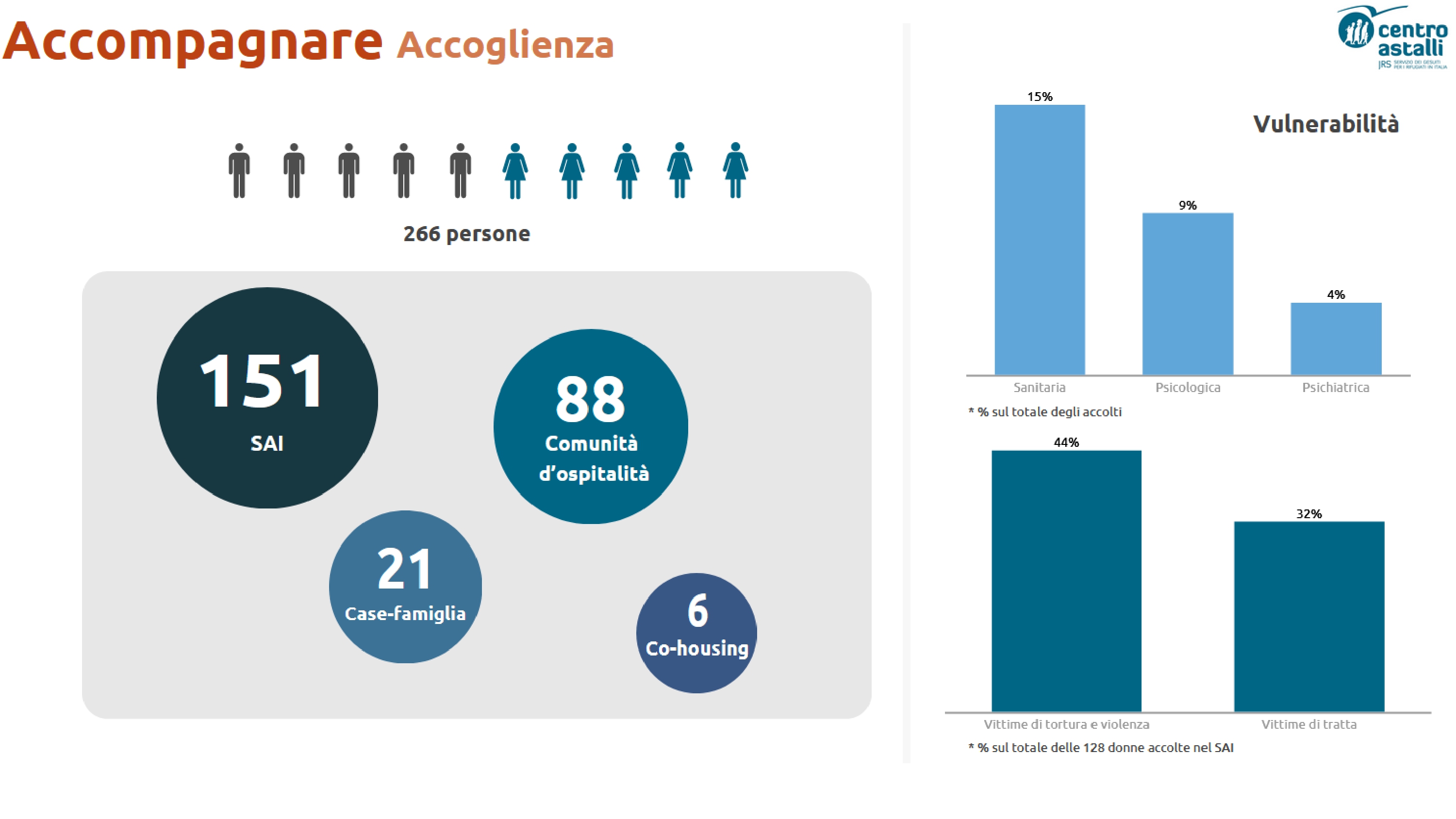 Need for a comprehensive integration plan. This has been the Astalli Centre’s recurring request and yet, despite the many positive experiences in the private and not-for-profit sector, “a decisive effort to reconsider the entire situation has yet to be made by national institutions.” Vocational training courses provided by the SAI system or contributions within the framework of specific projects could make a difference, but they continue being “occasional measures that can hardly have an impact on the general picture.”

Even those with jobs can only find makeshift solutions, such as subletting, resorting to undeclared rent or employment. Their stay in the centres remains long (at least 12 months), but even after they leave, families’ precariousness persists and they cannot rely on informal, parental or friendship support networks. Family reunification procedures are long and costly, and social services “fail to intervene effectively”.

Victims of torture, violence and abuse. In 2021, the Astalli Centre provided assistance to 213 women through the gynaecology service, which ascertained torture, gender-based violence or abuse, in their countries of departure or while travelling. A total of 334 victims of torture underwent a medical-legal examination to obtain a certificate to be filed with the Territorial Commission. Most of them were men, but the percentage of women is increasing (32% of the total), coming mostly from Nigeria, Senegal and Eritrea. The proportion of vulnerable refugees in the SAI centres is increasing (37% are victims of torture and violence). All those who suffered imprisonment in Libya report abuse, violence and persecution.

In 2021, migrants who managed to arrive in Italy through the Balkans also reported beatings and violence by security officers in attempts to push them back. 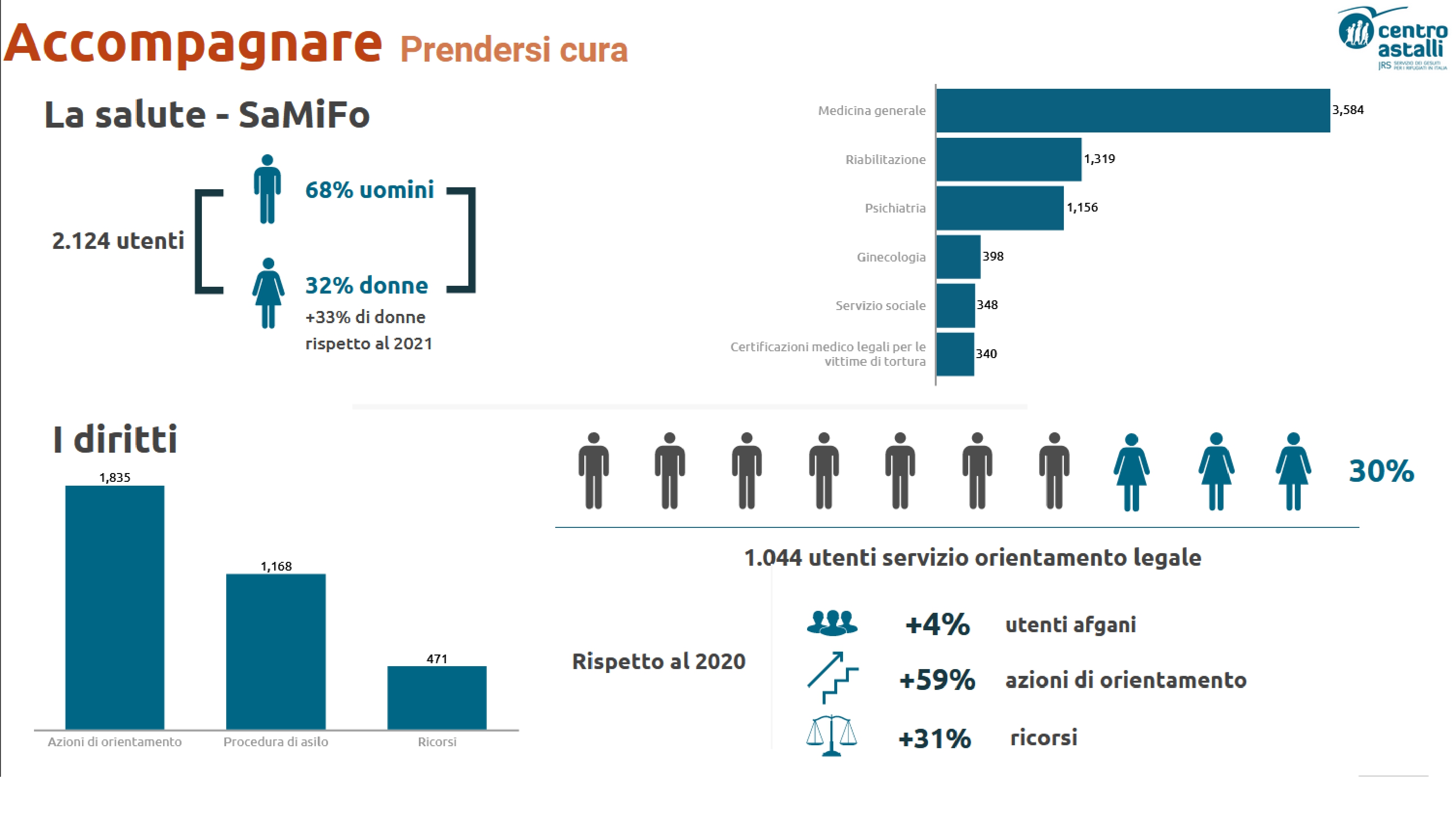