"The health crisis and the suffering caused by COVID-19 and by environmental pollution cannot be ignored. The 'threat' of the virus and that of pollution are interconnected, also because of its impact on the economy and consequently on employment," the Archbishop of Taranto told SIR

“Protecting our territories. Healthcare, environment, labour”: this was the main theme of the conference held in Acerra ( Italy) on April 17, closely related to the theme of the next Social Week of Italian Catholics to be held in Taranto from October 21 to 24: “The future we want for our planet. Health, environment and work. #Everything is connected.” The archbishop of Taranto, Monsignor Filippo Santoro, President of the Scientific Committee and organiser of the Social Weeks of Italian Catholics, discussed environmental and labour issues and future prospects, including the ongoing health and social emergency. 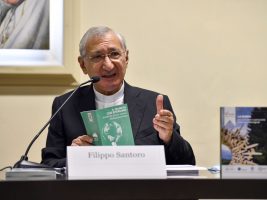 What will be the Social Week’s approach to environmental issues?

As announced during the presentation of the Instrumentum laboris,

The Social Week is a time to rediscover real -not illusory- hope for creating a better future respectful of Creation.

We cannot ignore the health emergency and the faces of those who are suffering because of COVID-19 and environmental pollution. The ‘threat’ of the virus and that of pollution are interconnected, also because of its impact on the economy and consequently on employment. We intend to foster a concerted approach by Italian Catholics to the environmental issue, both at global and local level, and to the societal issue, moving from an individualistic perspective to that of the community, from “I” to “we”, in the pursuit of the common good of society. As regards the environmental issue, the perspective of the Taranto Conference has as its objective the global common good that embraces not only social care but also care for the common home.

You have rightly said that serious responses to environmental problems are needed urgently in our country, while such problems are being neglected, and little has been done in terms of reclaiming contaminated sites. What can be done?

In fact, the situation here is the same, with my city once again typifying the many situations in Italy. Despite an array of studies, appropriations, promises, at each change of government, which unfortunately happens all too often, the whole process starts from scratch, like an exhausting wild goose chase. The issue of land reclamation in Taranto is an open wound: what has been done about it? Why did everything come to a halt? Serious solutions to environmental concerns are urgently needed, in the ‘Land of Fires’, as in Taranto, central Italy and in the Po Valley.

This is why an ”enlightened” ruling class is needed, one that knows how to overcome private and short-term interests to finally prioritise the common good.

Pope Francis, with the encyclical Laudato si’, has broken new ground by exposing the hypocrisies of those sacrificing  the environment and human dignity for the sake of profit. The Church had previously outlined the right path in our social doctrine, whereby the good of the human person should always come before the pursuit of profit. The human person is therefore at the centre, with his or her needs and demands, his or her fragilities. This also means giving priority to the poorest, with their fears and needs.

You called upon Catholics and on the whole of society to “take part” in a global movement for the care of Creation: to what extent are people aware of the relevance of these issues?

Had you asked me this question even just five years ago, I would have been sceptical, but today, thank God, that is no longer the case. There is greater public awareness of the fact that our relationship with Earth needs to change quickly, despite the efforts made by global powers. This new and widespread sensitivity, yet unable to be properly represented, deserves proper organisation.

The task of the Church, the task of the upcoming Social Week, is to promote continuous dialogue with everyone provided that the good of peoples, especially the poorest, and of the Planet, is pursued.

In Taranto, as in the so-called ‘Terra dei fuochi’ (‘Land of fires’) in the Campania region, employment has occasionally been presented as an alternative to health and environmental protection: how can this opposition be overcome and how can environmentally-friendly workplace be promoted? Can Next Generation EU be of help?

The Next Generation EU Plan is an opportunity not to be missed! We have the potential to use its funds to invest in a new development model that will trigger renewed growth, a new way forward, particularly in the worst-hit areas of the South, relinquishing the idea of exploiting the environment, of recklessly exploiting resources as if they were unlimited, and thus respecting the dignity of labour and workers.

Employment and quality investments should be promoted, especially in the South of Italy,

where 40% of the Next Generation EU resources are expected to be deployed. Our future depends on this.

The theme of the Social Week of Italian Catholics in Taranto is “The future we want for our planet. Health, environment and work. #Everything is connected”, centred on the common good, human dignity and the protection of our common home. Yet in the world, in Amazonia as in Italy, the logic of profit has caused widespread damage. How can this battle be won?

We must love the place where we live: Taranto, the Land of Fires, Amazonia.

Every person must feel the impact of these problems, of environmental and labour problems that are afflicting us, with our young people leaving – be they Indigenous peoples, Europeans or Italians – and give central importance to proclaiming the Gospel as the promise of a new life.

In the exhortation “Querida Amazonia”, the Pope addressed not only the Amazonian peoples, but also our parishes, our movements, along with all the other associative and ecclesial realities, asking them to revive and update their pastoral practice on the basis of the reflections that Francis expressed during the Synod on the Amazon.

What are the requests to the political world today, in the context of the pandemic, in terms of work, the environment and health?

As mentioned earlier, there is widespread awareness of the importance of environmental concerns among the population at large, but it is met with obstacles by many with governmental responsibilities. For instance, in Italy, we are waiting for innovative measures to be implemented by the political leadership that pledged to introduce them with the Recovery Fund. However, while the global ecological movement may have prompted widespread environmental consciousness along with countless initiatives to protect the Earth, efforts to find concrete solutions to the environmental crisis were stalled by instrumental denialism on the part of those in positions of power.

We must therefore ‘wear out the soles of our shoes’ and be the architects of the future: we have a responsibility to stir consciences and call on Catholics and the whole of society to ‘take part’ in a global movement designed to be the instrument of God for the protection of His work: Creation.

What is the role of the Church for changing lifestyles and for development models centred on the human person and on the cry of the Earth and the cry of the poor?

Once again, Laudato si’ and the Church’s social doctrine provide the answer: we are called to respond to the call for a cultural conversion, a change of mentality, a change of course; it is necessary to change lifestyles and also our understanding of development.

and, as we have seen in the Synod on Amazonia, listening to the cry of the earth and the cry of the poor, from a perspective described by the Pope as social, cultural, ecological and ecclesial.