“Mediterranean, frontier of peace" is the theme of the meeting organized by the Italian Bishops' Conference (CEI) that will take place in Bari from 19 to 23 February. The event will bring together Catholic bishops from 20 countries bordering the Mare Nostrum. Among them also Msgr. Pierbattista Pizzaballa, Archbishop, Apostolic Administrator of the Latin Patriarchate of Jerusalem, representing CELRA (Conference of Latin Bishops of the Arab Regions). SIR met him in Jerusalem

“This meeting is in line with the previous one of July 7 2018, also held in Bari, attended by the Heads of Christian Churches and communities of the Middle East, on the initiative of Pope Francis. The event promoted by CEI will bring together Catholic bishops from 20 Countries bordering on the Mediterranean to share mutual experiences and identify common grounds with a view to providing further guidance to our home communities. The purpose is not to solve problems but to suggest our communities how to live within their respective situations.” 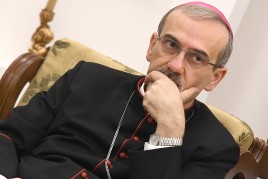 The meeting “Mediterranean Frontier of Peace”, to be held in Bari February 19 -23, will be attended, inter alia, by Msgr. Pierbattista Pizzaballa, Archbishop, Apostolic Administrator of the Latin Patriarchate of Jerusalem. “A unique gathering – as defined by the president of the Italian Bishops’ Conference, Card. Gualtiero Bassetti – based on listening and community discernment; above all, a meeting which, by enhancing the synodal method, aims to take a small step towards the promotion of a culture of dialogue and peace-building in Europe and throughout the Mare Nostrum basin.” In Bari, Msgr. Pizzaballa will represent the CELRA (Conference of Latin Bishops of the Arab Regions) which includes North and South Arabia, Qatar, Kuwait, Yemen, Lebanon, Iraq, Somalia, Syria, Holy Land with Israel and Palestine.

Your Excellency, these Countries are unfortunately notorious for wars and grave social and political conflicts. What contribution can the CELRA make to the meeting in Bari?

Our first aim is to share information about the situation in our countries, not so much on the political perspective but on the life of our communities. We will talk about their living conditions caused by wars, we will convey their sufferings but also their motivations: in fact the reason they are still there is that they have chosen to stay. And together we shall try to define our vocation in that context. As I said in my homily on 1 January, we are called to bear witness to our desire for dialogue not only as individual believers. First and foremost it must be the witness of the whole Church, understood as a community and not as an institution. This is the primary vocation of our Church in these lands today.

What should be the focus so that this culture of dialogue may receive decisive impetus?

Before talking about dialogue and the Churches, the sense of belonging to the community must be strengthened.

We engage in dialogue as Churches, as leadership, as individuals. But the first priority for a pastor is to ensure unity and strengthen communal feelings within complex political situations, where politics is absent, where societies are breaking apart, amidst all sorts of religious tensions.

It is our duty to build communities that are reconciled and welcoming, open; genuine areas for shared fraternity and sincere dialogue. The strategy of conflict must be countered by the art of dialogue. In this respect, the first thing to do is

to strengthen the sense of community. It’s the only way to foster a culture of dialogue.

Dialogue always starts from life, not from abstract ideas. Our communities must continue dialoguing and this requires them to ‘go out’, to be present in ordinary life, schools, parishes, and in activities of various kinds. That is where we must all become agents of dialogue. For example, you cannot live together with Muslims without talking to them.

In many of the Countries you represent, “grassroots” dialogue is, in some way, already a part of daily life. In that case, what is missing?

Greater awareness. Encounter and dialogue must be experienced with greater awareness. To be aware that what you are experiencing is a great thing and for this reason it should not be lived in a passive way. Giving in to resigned attitudes would be a serious lack of faith. Dialogue is above all a spiritual disposition indicating the ability to step out of oneself to listen wholeheartedly to other people’s expectations.

How do you envisage the future of the Mediterranean Sea, defined the “Great Lake of Tiberias” by Giorgio La Pira?

History speaks for us. In over 2000 years of history the Mediterranean Sea has always played a central role. In addition to wars and tensions, there have also been cultural, social, economic and commercial exchanges. The same will happen in the future. But for me the question is: as Christians, where will we be? The answer does not depend on numbers but on the content of our ideas, on the depth of our faith.

Are you worried about a Christian exodus from this region?
This area will never remain without the Christian presence. There will be poorer and richer areas. We are currently witnessing migratory movements in all directions. Some Christians are leaving and others are arriving, I am thinking of Saudi Arabia, Israel, just to give a few examples. We must not hang on to the past as our benchmark, as a sort of fetish.

We are not dying. We are changing.

There are evident transformations, and we want to make our voices heard …

In the Mediterranean, East and West touch each other, yet they hardly engage in dialogue… The problem with the West is that it talks about us and not with us.

What signs emerge from the popular unrest in Lebanon and Iraq?

Beautiful and very important signs. They will not bear imminent fruits because the protests cannot continue forever. All the more so if they will not result in concrete decisions by the respective political leaders. That’s the fear. The weakness of leaderships incapable of taking political decisions that meet the expectations of the people is a common feature throughout the Middle East. In spite of this, the ongoing protests are producing a strong change of mentality, of thought, of culture, of relations, which are bound to bear fruits in the medium term.

Could this be the season for a new Christian presence in politics ?

The political commitment of Christian citizens is a long-standing tradition, especially in Lebanon. I believe that

as Christians we must stop complaining and start building.

As I have said before, one cannot remain silent in the face of injustice, or invite Christians to remain unmoved and disengaged. The preferential option for the poor and the vulnerable, however, does not make the Church a political party. The Church loves and serves the polis and shares with civil authorities her concern and action for the common good, in the general interest of all and especially of the poor.