Even a shipwreck can be "providential" for Gospel proclamation, the Pope said, and in the first audience of 2020 he appealed to "show sensitivity towards the many shipwrecked people in history who reach our shores exhausted.” To the Arab-speaking faithful: "we must not be afraid". Solidarity with the Australian people afflicted by wildfires. Rediscovering the date of our baptism. Surprise performance of "Aqua" Circus

“Show sensitivity towards the many shipwrecked people in history who reach our shores exhausted. May they be welcomed with the fraternal love that flows from the encounter with Jesus.” This invitation concluded the first general audience of Pope Francis of the year 2020, devoted to the shipwreck of St Paul in Malta, during the journey from Caesarea to Rome, narrated in the final part of the Acts of the Apostles. “This is what saves us from the frost of indifference and inhumanity,” Francis said. “We are asking the Lord today to help us live every ordeal sustained by the force of the faith”, the final appeal of the catechesis, delivered in the Paul VI Hall before 7,000 people. Surprisingly, on stage, the performance of the Aqua Circus. 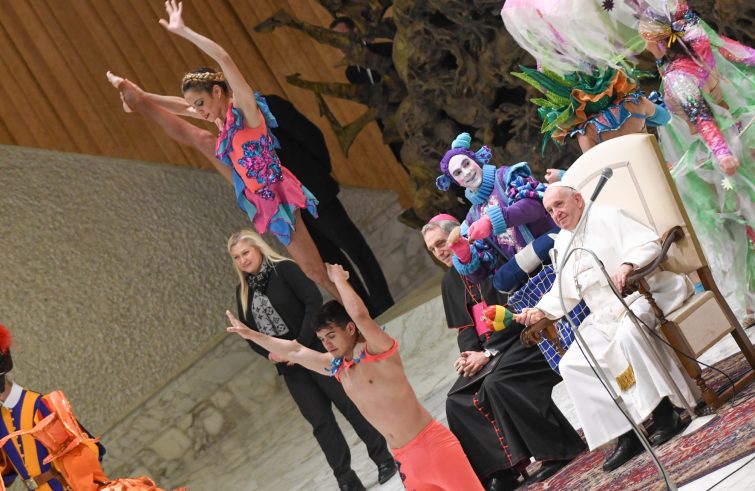 During the greetings that, as customary, mark the second part of the Wednesday gathering, the Pope, greeting Arabic-speaking pilgrims, addressed, in particular, pilgrims from Iraq, Lebanon, Syria and the Middle East.

“In the saddest moments of our life, in the most anguishing and challenging moments we must not be afraid”,

these words seemed to indirectly refer to the crisis between the U.S. and Iran that has escalated in the last few hours.

“I am close to the people of Australia.”

Francis assured referring to the “difficult moment” that the continent, devastated by fires, is going through. During his greetings to the Italian-speaking faithful, Francis once again called on the believers to find out the date of their baptism, with a view to the liturgical feast next Sunday.

“Read the Book of the Acts of the Apostles and you will see how the Gospel, through the power of the Holy Spirit, reaches out to all peoples, becomes universal”.

The Pope opened the general audience with these unwritten remarks, resuming the catechetical series on the Acts of the Apostles, whose final part narrates that the Gospel is preached not only on land but also at sea, on the vessel that brings Paul, a prisoner from Caesarea, to Rome, in the heart of the Empire, for the fulfilment of the Word of the Risen One: “You will be my witnesses to the ends of the earth”. When the crew loses control and leaves the vessel adrift, Paul as a man of faith “knows that even that ‘danger of death’ will not separate him from the love of Christ and the mission he was entrusted with. Even in adversity, he never ceases to be the guardian of the lives of others and the animator of their hopes.” The plan that guides Paul towards Rome, thus, “saves not only the Apostle, but also his travel companions, and the shipwreck, from a situation of misfortune, turns into a providential opportunity for the proclamation of the Gospel”.

“A ‘severely tested’ Christian can certainly feel closer to those who suffer, because he experienced suffering, and open his heart to solidarity with others”.

The Pope said, describing Saint Paul’s presence in Malta as an auspicious occasion to “carry out a ministry of compassion in the anointing of the sick.” “This is a law of the Gospel”, commented Francis: “When a believer experiences salvation he does not keep it for himself, he puts it into circulation”. “The people of Malta are good people, they are kind, and they are welcoming”, added the Holy Father in unprepared remarks noting the “solicitous response” of the inhabitants of Malta after the shipwreck of the vessel with St. Paul on board, bitten by a viper but “unharmed, indeed even mistaken for a deity.” “History shows that from that moment on there were no more vipers in Malta”, Francis added impromptu: “It’s God’s blessing to the hospitality of this very good people”.