Belgrade’s new pastoral centre dedicated to John XXIII was unveiled during an eucharistic ceremony on September 10th by the cardinal of Sarajevo, Vinko Puljic, along with the archbishop of Belgrade, mgr. Stanislav Hocevar, and bishops from Serbia, Bosnia Herzegovina and Croatia. 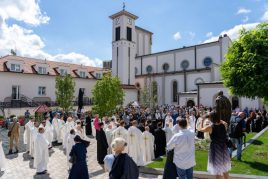 The bishop of Hvostan, Justin, on behalf of the Serbian patriarch, Porfirije, the bishop of Mohac, Damaskin, the vicar of the patriarch, bishop Sava, and many devotees of the Serbian Orthodox Church. The deputy Prime Minister, Maja Gojkovic, on behalf of the Prime Minister, and the director of the Directorate for Cooperation with Churches and Religious Confessions, Goran Vesic, and many ambassadors were in attendance as well. In his speech, mgr. Hocevar went through the history of the archdiocese of Belgrade, the recent first Diocesan Synod and the many plans to bring this space called “Marianum” into being. “Even if the Marijanum project has not been completely finished yet, the overall picture of the pastoral centre has already been outlined and accomplished, so that all of the pastoral and pedagogic programmes may start no later than this academic year”, the archbishop of Belgrade stated. During the sermon, instead, cardinal Puljic said “that the pastoral centre should be a blessing for all the activities that will take place there, because any construction should help man build with charity, goodness and hope”. At the end of Mass, cardinal Puljic blessed the mosaic of the Transfiguration of the Lord by Marco Rupnik and the statue of John XXIII.