The 15th Day of volunteers and associations in the Holy Land was held November 5 in Rome. Speakers included Father Ibrahim Alsabagh, a Franciscan friar from the Custody of the Holy Land, who served as parish priest of Syria's war-torn city of Aleppo for more than eight years, and has been parish priest of Nazareth for less than a month. SIR recorded his testimony

“After 12 years of war, Syria is a shattered country. It’s like a football that is being kicked around by different players that are none other than the armed forces of the world’s most powerful countries”, denounced Father Ibrahim Alsabagh – a Franciscan friar at the Custody of the Holy Land, who served as parish priest of Syria’s war-torn city of Aleppo for more than eight years – at the 15th Day of Volunteers and Associations for projects in the Holy Land, held on November 5 at the Pontifical Antonianum University in Rome. An annual event organised by the Holy Land Foundation. 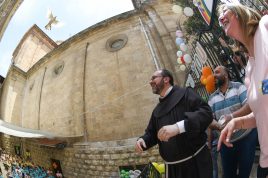 “Like a football that is being kicked around.” Father Alsabagh, appointed to serve the parish in Nazareth less than a month ago, described the situation in Syria today, particularly in Aleppo, underlining the country’s widespread “poverty, hunger, and infrastructure damage” that “no one can or wants to mend”, because “this war is nothing more than a fragment of many other wars.” “Sixty percent of Aleppo has been destroyed. Only the Church is making an effort to repair people’s homes. Government intervention is limited to town squares, roads, and not much else”, he said. This material poverty is also caused by poor political activity. “Not one oil or gas well is benefiting the people,” said the Franciscan priest, noting the exploitation of Syrian resources by “other States. The Syrian government is supplying families with only 50 litres of diesel per year at a reduced price. The people are struggling to make ends meet, amidst soaring prices and stagnating wages. Monthly pensions are barely enough to purchase three or four days’ worth of food. International sanctions, currency depreciation, corruption and bureaucracy are to blame for everything else. Father Alsabagh outlined the “humiliating electricity crisis. The absence of uninterrupted electricity supply is leaving households exposed to summer heat and to cold winter temperatures. In the summer, private homes are unbearably hot, with no air conditioning, no washing machines, no refrigerators where families can store some food.” The country is confronted with a permanent health emergency: “there is a shortage of doctors, medicines, while hospital facilities are reduced to the bare minimum. The State cannot guarantee life-saving drugs, which it used to provide to the seriously ill before the war. Diseases like tumours, neurodegenerative diseases, respiratory diseases are on the rise because of the war”, pointed out the parish priest in Nazareth. The combination of sanctions and Covid “has made things worse for the people, with inapplicable distancing provisions, given the situation. And now, the war in Ukraine and the grain shortage made bread supplies harder to obtain.” 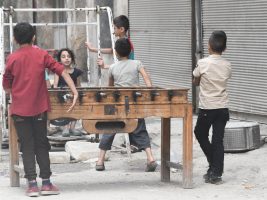 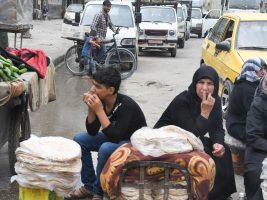 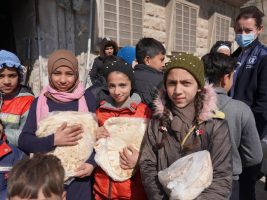 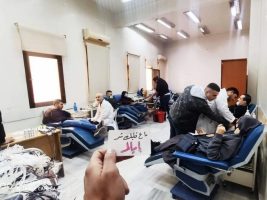 An unbalanced society. “These living conditions have forced a large number of Syrians – many of them Christians – to emigrate,” added Father Alsabagh.  They entrust themselves to sea pirates that will take them across the Mediterranean, putting their lives and those of their families at risk. Today, Syrian society is unbalanced: men and young people are fleeing. Only women and the elderly remain. The country is on the brink of collapse and it survives only thanks to the humanitarian support offered by the international community. The severity of the situation is reflected in the absence of a political, negotiated solution that leaves the population in a state of growing despair.”

The commitment of the Church. “The Church, with the Custody of the Holy Land, tries to contribute as much as she can, given her limited means,” said the Franciscan friar. “In the past few years we managed to rebuild and restore 1,700 flats, helping approximately 1,500 young people and families with job-creation projects.” One notable project is the “Five Loaves and Two Fish” project: a parish soup kitchen serving thousands of daily meals to all those in need, regardless of ethnicity or religion. A bakery has also been set up alongside the soup kitchen. “It is a unique project in Syria in terms of the numbers and continuity of service,” said Father Alsabagh. “We helped pay rents, tuition fees, purchased household appliances. We also bought coffins to ensure a proper burial for our dead. The local Christian community is steadfast in the faith despite the difficult situation, flocking to the churches. In this situation, we can be saved only by faith.”

The future? “Difficult, daunting and fraught with challenges,” replies Father Ibrahim with no hesitation. “Besides the inhuman social, economic and health conditions faced by the local population, as Christians we are also called to tackle growing religious fundamentalism. Indeed, certain family groups and factions are ideologically exploiting religion to pursue their own specific agendas. The institutional, social and political disorder that fuels corruption at all levels is another major challenge. Unfavourable winds are blowing against Christians, but this does not worry us. We know we are saved by our faith. We are also comforted in this by the desire of many Muslims to deepen their knowledge of Jesus. Many people are on a journey of discovery”, concluded Father Alsabagh.