Speaking to SIR, Doctors Without Borders/Médecins Sans Frontières (MSF) head of mission in Yemen Thomas Courbillon, describes the situation in Yemen, a forgotten conflict raging for the last seven years. A two-month truce was declared at the beginning of April and negotiations are underway, but the country is facing a major humanitarian crisis. Two thirds of the population (20 million people) need humanitarian assistance, 3 million are internally displaced. Health, schools and the economy in general are in dire straits, but there is a shortage of funds for development projects

A truce went into effect in Yemen in April, meant to last until the end of May. The shelling has stopped but the country is facing one of the world’s largest humanitarian crisis. It’s the first truce since the conflict broke out in 2015. Saudi Arabia, leading the coalition supporting loyalist forces, announced it would release dozens of Houthis  – the Iranian-backed ‘Ansar Allah’ armed group of rebels now controlling the capital Sana’a. International negotiators hope that at the end of May the truce will be extended, also in light of resumed talks between Iran and Saudi Arabia. Nevertheless, 20 million people (two thirds of the population) remain in need of assistance as a result of the humanitarian crisis. Three million  – on a population of 30 million inhabitants  – are internally displaced. The few who could afford it have fled to other countries within the Arabian Peninsula, to the USA or to Norway. But the poverty-stricken majority of the population had no other option than to stay. Yemen – along with Ethiopia (Tigray) and South Sudan – figures among the three most serious humanitarian crises in the world, with a 571 per cent increase in the number of people living on the brink of starvation compared to 2016. On top of this, by 2022 Yemen will have received only half of an estimated USD 4.3 million needed to support the population. In some parts of the country, such as the city of Abs, malnutrition is at an alarmingly high level, especially among children. The embargo imposed on several raw materials, soaring prices and fuel shortages prevent the population from having enough to eat. Many children are out of school, either because many school facilities were destroyed by the conflict or because they have to work to support their families. Numerous medical centres have had to shut down due to a lack of funds. People in need of medical care are flooding into the few remaining hospitals, and sometimes when it’s too late. According to the UN, seven years of conflict in Yemen has claimed the lives of an estimated 400,000 civilians. It’s the situation depicted to SIR by Doctors Without Borders/Médecins Sans Frontières (MSF) head of mission in Yemen Thomas Courbillon.

The medical-humanitarian organisation is actively working in twelve hospitals and fourteen healthcare centres, with 2,700 medical staff, including approximately one hundred foreign nationals. All UN agencies, the largest NGOs and organisations in the Arabic peninsula linked to the Islamic world have a presence in the country.

“It’s still early to see the effects of the truce that started with Ramadan. Of course, attacks and shelling have stopped, which is a relief for civilians, but precarious living conditions remain”, says Courbillon: “As yet we are not seeing a marked improvement, and the prospects for 2022 are looking bleak.

When funds are in short supply, NGOs tend to focus on emergency life-saving operations and less on development. That’s also why the overall situation is deteriorating.”

Following major difficulties last year, Médecins Sans Frontières has only recently managed to ship medicine and logistics supplies from their warehouses in France and Belgium into the country. Reduced funding also impacted heavily on healthcare services. “We were forced to discontinue support for general medical care in order to ensure support to hospitals,” he says. “Many health facilities are now closed. The local population faces increased difficulties in accessing treatment that requires travelling, given the shortage of fuel and financial resources.  Free treatment is rare. Hospital emergency rooms are overburdened, with patients arriving late with multiple complications. Diseases that could otherwise be treated swiftly necessitate further treatment and hospitalisation. And without funds, hospital beds and medical staff cannot be increased.”

Child malnutrition and humanitarian aid dependency. As in every conflict, civilians and the most vulnerable groups – women, children and the elderly – always pay the highest price. “We have been registering serious cases of child malnutrition at Abs Hospital, which we have been supporting for years,” he says, “because families struggle to find food. Moreover, a cultural tendency of mothers not to breastfeed and use formula milk instead, causes diarrhoea and dehydration in their children. Mental distress among children is also widespread.” A large part of the population in Abs, especially IDPs, rely on humanitarian organisations for their basic necessities. They need protection, assistance, shelter, nutrition, psychological support, and medical assistance.

Small hopes from the truce. Although Médecins Sans Frontières dedicates all its efforts to the patients and is not concerned with the political situation, Courbillon agrees that compliance with the truce is

“a sign of openness that should be attentively monitored.

It means that the involved parties are speaking to each other and that they are communicating. We have to wait and see what happens in the coming weeks and months”, he remarks. “Albeit at a political level there is some weariness among all those involved, there may be a willingness to negotiate, with the UN acting as mediator. Admittedly, it is a complex conflict with numerous players, and we don’t know how it could unfold.” 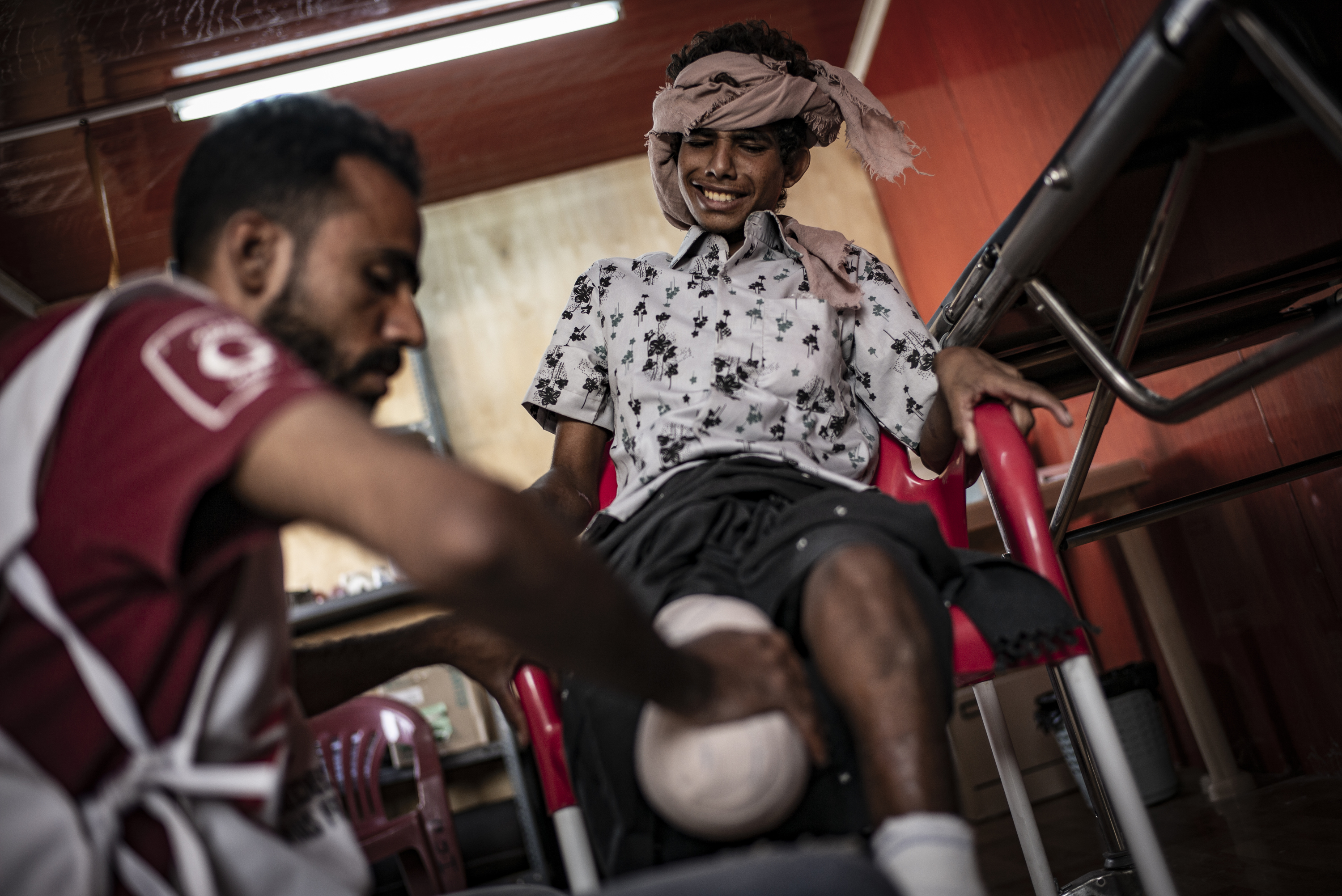 A conflict forgotten by the West. Nonetheless, the country’s financial situation is disastrous. Yemen has some magnificent archaeological sites and a very rich culture. The ancient city of Sana’a, renowned for its unique mud brick building, is stunning, but the war has annihilated also tourism. Western societies hardly talk about this ‘forgotten conflict’, maybe because “it lacks important resources for our industries”, comments Courbillon, who concludes with an appeal: “First there was the Covid pandemic, now Ukraine. The truth is that

there have always been forgotten conflicts, but Yemen deserves our attention.”