“The second wave hit us like a tsunami". The Archbishop of Bombay, President of the Bishops' Conference, Cardinal Oswald Gracias used this term to describe the devastating rate of infections and deaths in India. The country saw over 300,000 daily new infections and more than 2,000 COVID-related deaths in the past 24 hours. Oxygen shortage is the primary concern in this second wave. "Many are dying without oxygen," the cardinal said, proposing a Day of Prayer and Fasting on Friday May 7 for the victims, for the country and for the government that "is committed to protecting our safety. This is not the time for politics. It’s a time for solidarity”

The second wave of the Coronavirus epidemic raged through India like a ”tsunami” that “the government had neither foreseen nor planned for.” ” This absence of planning” thus resulted in “a shortage of hospital beds, of antiviral drugs, oxygen and vaccines.” SIR contacted by phone Cardinal Oswald Gracias, President of the Indian Bishops’ Conference and Archbishop of Bombay, asking him for an update on the situation of the epidemic in India. Data on contagions and deaths indicate a serious humanitarian crisis in the country that saw over 300,000 daily new infections and over 2,000 COVID-related deaths. The total number of confirmed COVID-19 cases topped 17 million, a record-high figure since the outbreak of the pandemic. But experts say those numbers represent just a fraction of the total, which don’t include unconfirmed cases and deaths attributed to pre-existing diseases. “Many are dying, and they are dying without oxygen,” said the cardinal, who is scheduled to attend the “Council of Cardinals ” – C9, of which he is a member – online meeting next week with Pope Francis. “We received help from England, Germany, the United States, also from Singapore and Hong Kong. We hope the crisis will be over in a few days. We have to learn from Europe and other countries that are responding to a third wave.” 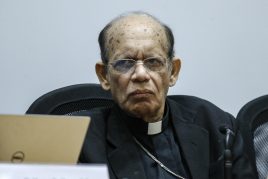 Your Eminence, can you describe the situation so far?

The second wave hit us like a tsunami. We saw the fast spread of the virus. Sadly, the government had neither foreseen nor planned for this new wave. The epidemic took us by surprise. Hospitals rapidly filled to capacity and many people died from lack of oxygen. However, I must say that there has been a slight improvement in the last few days. The virus is slowly being brought under control. We are finally seeing efforts being made together. Oxygen is starting to arrive and so are the vaccines. The situation is not improving throughout the country, but I would say that here in Mumbai things are looking better. However, I am told that the situation in New Delhi is worse.

We are unfortunately paying the price for a lack of planning.

You sent out an appeal.

In fact I called on people to follow the government’s rules: masks, hand-washing and distancing, complying with the restrictions and curfews imposed to prevent the chain of infections. We have also announced a Day of Fasting and Prayer for Christians to be celebrated on 7 May for the victims of the Coronavirus, for the battle against the epidemic and for the government, which is currently committed to ensuring safety in our country.

This is not the time for politics. It is a time for solidarity.

How was it possible to die from lack of oxygen?

Oxygen shortage is the major emergency in this second wave. It is a problem even in our hospitals in Mumbai and New Delhi. It was primarily related to the transport of oxygen supplies from one Federal District to the other. I hope this situation will improve in the coming days.

Do you want to send out an appeal?

I don’t wish to appeal for help but for prayer. Prayer for the people, prayer for the government, prayer that our country may overcome this crisis as soon as possible. As I said, this second wave was predictable, but we were caught unprepared.

We assumed that it was over. We had weathered the first wave with ease. Instead, things spiralled out of control.

How are people reacting?

People have not lost hope. In fact hope is a reality here.

All religious faiths are working together alongside the population. We, as Catholic Church, are helping out through Caritas and the Catholic Hospitals. Especially in the first phase of the epidemic, Caritas assisted the people fleeing the cities for fear of contracting the virus. We hosted them in our schools and homes. We immediately offered to collaborate with the government to provide assistance.