Tension erupted after North Korea blew up the liaison office with South Korea in Kaesong and threatened to send troops into the demilitarized zone. Appeal of the Bishop of Daejeon: "I call on the countries bordering the Korean peninsula and the international community: please allow us to come together. We can do everything, we can work together for peace and the reconciliation of our people"

“We are brothers and sisters, we speak the same language, the same story. I callon the countries bordering the Korean peninsula and on the international community: please allow us to come together. We are capable of doing everything, of working together to achieve peace and reconciliation of our people”. Bishop Lazarus You Heung-sik spoke from Daejeon, while in Korea tension unfortunately escalated after North Korea blew up the liaison office with South Korea in Kaesong. The incident occurred in the border town of Kaesong after 2 p.m., local time, near the demilitarized zone marking the border between North and South Korea.

The bishop pointed out that the explosion occurred the day following a very significant date for the peace process in Korea. In fact, on June 15, 2000, 20 years ago, the representatives of the two governments – Kim Dae-jung, Nobel Peace Prize laureate and Kim Jong-il, supreme leader of North Korea – met for the first time since the division of the Korean peninsula and signed a Joint Declaration. But now the situation has grown extremely complicated, mainly because of the pandemic.

North Korea has also been hit by Covid-19, and after the border with China was closed, it suffered serious and destabilizing repercussions not only on the population but especially on the country’s internal economy.

This internal crisis is compounded by difficulties in the dialogue between North Korea and the United States.The historic meetings between Kim Jong-un and US President Donald Trump, in 2018 and 2019, first in Singapore and then in Hanoi in Vietnam, failed to deliver satisfactory outcomes, and despite all the efforts made by incumbent South Korean President Moon Jae-in, North Korea blames South Korea for US diktats and interference in the latter’s politics. “The reconciliation process must involve Koreans,” said Bishop Lazarus, “we are part of one people and the future of the country belongs to us.” 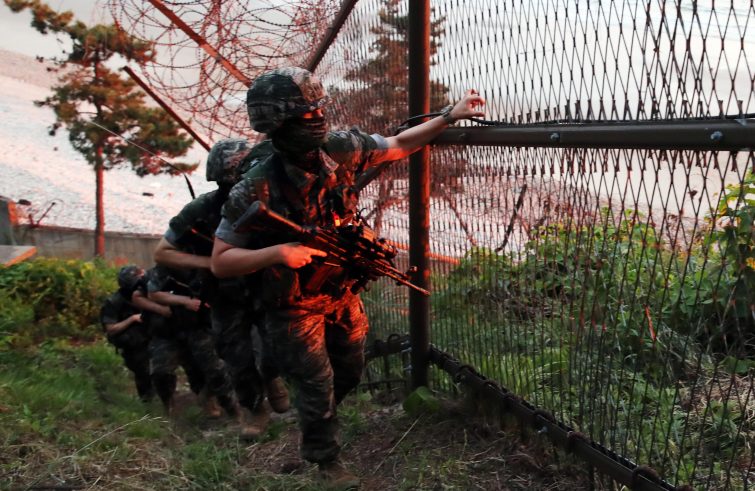 But today’s bombing would appear to be North Korea’s harsh response to the propaganda leaflets sent with helium balloons by groups of dissidents who have long since fled to South Korea. On June 9, North Korea cut off inter-Korean communication lines with Seoul, including diplomatic and military, while according to KCNA, the official news agency of the Pyongyang regime, the North Korean army is prepared to send its troops to the demilitarized zone that divides the peninsula. This decision was taken by Kim Yo-jong, sister of leader Kim Jong-un, on 13 June last. “Speaking against each other must stop,” said Msgr. Lazarus You today.

“Those flyers caused deep hurt. That is why I ask: let us face this moment calmly and above all with a more constructive and respectful dialogue with both parties involved.”

The bishop is now turning his attention to another important date for the peninsula. In fact next 25 June marks the 70th anniversary of the Korean War. Since then, North and South Korea have fallen into a state of military tension as they never signed a peace treaty at the end of the 1950-1953 conflict. In this respect, the bishop recalls the words of Pope Francis in Daejeon, meeting young Asians in August 2014: “We are brothers and sisters who speak the same language”. “Those precious words still bear special value today, for they are a strong reminder of our memory and challenge our Christian conscience,” says the bishop. “It doesn’t matter who wins or who loses, what matters is to move forward together and be agents of peace; men and women with evangelical courage and audacity who know how to build bridges of fraternity and communion.

“Hate leads nowhere, it’s never a final solution, because all forms of division are always a major defeat.”