The diplomatic row between Italy and France over migration is ongoing. After the decision to reinforce border controls with the deployment of thousands of French gendarmes, the situation remains virtually the same. “This procedure has been in place for years, aimed at preventing free transit and at sending about eighty people back to Italy every day with a variety of stratagems", including slipping Italian sales receipts in the pockets of migrants stopped on French soil, or driving them back with unmarked cars. There were also minors among them. Speaking to SIR, the Bishop of Ventimiglia-Sanremo, Monsignor Antonio Suetta, confirmed this situation

France’s iron-fist approach towards Italy, involving stricter border controls “was actually a demonstrative action, a show of force. They slightly intensified controls over the past few days, but without exaggerating. Regrettably, this procedure has been in place for years, aimed at preventing free transit and at sending about eighty people back to Italy every day with a variety of stratagems”, Monsignor Antonio Suetta, bishop of Ventimiglia-Sanremo, told SIR, commenting on the migration controversy between Italy and France. Men, women and children migrants wishing to go to France or other countries in northern Europe are not allowed to cross the border freely because of the Dublin Regulation ( which requires the migrant to remain in the country where he or she has been identified), and also because France suspended the Schengen Agreement in 2015 after the Paris terror attacks. As a result, they are forced to resort to illegal channels and to migrant-smugglers to cross the border (in exchange for money). But when they are stopped by French law enforcement they are sent back to Italy, including minors, even though the Dublin treaty forbids it. “In theory they should have proof that they arrived from Italy. So sometimes the French police slip sales receipts issued in Italy into the pockets of migrants and with this excuse they send them back. Sadly many of them are minors”, said Monsignor Suetta, who received this information from volunteers operating on-site. “It’s one of their tactics. Another stratagem they use is to change the age of the minors or drive them back in unmarked cars: they enter Italian territory and when no one is looking, they dump some of them and leave them there.” 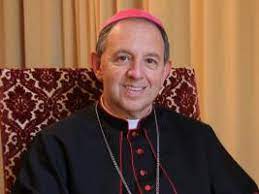 Unchanged situation at the border. “France wanted to bring this situation to the fore by increasing the number of border guards,” the bishop explained. “But the situation remains practically unchanged as France unilaterally decided to suspend Schengen years ago. With this pretext it actually caused the problems on the Italian border.” A few weeks after periods of massive landings, Ventimiglia and the surrounding area become the scene of injustice and degradation, with migrants camped out along the area near the river or under a motorway viaduct in very poor conditions, waiting to cross the border along dangerous mountain trails. No increase in arrivals has been reported over the past few days. “The numbers have fluctuated slightly, but they are virtually the same,” the bishop pointed out. “It is somewhat comparable to the crossing of the Mediterranean. These poor people are forced into terrible adversity. And it gets worse during the winter”.

Caritas reception. For the past two years, Caritas has made available a couple of flats in Ventimiglia to house women and children in transit, 10 to 15 people, always full. The reception centre provides for the distribution of food, clothes and blankets. It works in partnership with Caritas Intemelia, a charitable organisation that shares their approach and ideals. In agreement with the prefecture, the diocese hopes to receive a positive response to a request for emergency accommodation for the winter by the end of the month.

“Italy and France must speak to each other in peace – says Monsignor Suetta – and a well-directed strategy must be put in place at EU level to handle the historic phenomenon of migration, showing solidarity towards migrants and loyalty towards the various European nations. I don’t think it is appropriate to fan the flames of this controversy, it is never the right way to resolve a problem.” “In my view, far from rubbing salt into the wound”, he added, ” France does not seem to have so many reasons to point the finger at Italy. Unfortunately, inefficiency and operating mistakes can happen.” “Sometimes the problems are raised not for the purpose of being addressed, but because they are instrumental to other ends, on both sides. The situation should be tackled with utmost objectivity, free from partisan sentiments.”

His final hope is that

“this deplorable circumstance may be seized as an incentive to sit around a negotiating table for real, not just Italy and France but at the European level.

Each European nation must shoulder its responsibilities in the face of this phenomenon”, perhaps “in a diversified manner, because some countries can take in more regular immigrants. Obviously, in Italy, Malta, Cyprus and Greece, owing to their geographical position, the emergency dimension prevails. This dimension must be adequately supported and shared at European level. While geography does not change, interventions can be more or less consistent, depending on the actual needs.”