The Migrantes Foundation presented its 17th "Italians in the World Report" in Rome on Tuesday. Italians residents are found in every corner of the world today. Every region of Italy has seen its residents leaving and bidding farewell to their homeland in the past, and continues to do so today. Italian citizens residing abroad present a varied profile, comprising youths, young adults, older adults, the elderly and minors. Over 2.7 million left from the south of Italy; more than 2.1 million left from the north of Italy and 15.7% were originally from central Italy. 54.9% of Italians moved to other European countries, 39.8% to America - Central and South America in particular

“An inter-cultural Italy in which 8.8% of its registered residents are non-Italians ( almost 5.2 million in absolute terms), while 9.8% of Italian citizens live abroad (over 5.8 million).”

The first snapshot of Italy is contained in the ‘Italians in the World Report 2022’ (RIM), now in its seventeenth edition, was presented in Rome today by the Migrantes Foundation, under the direction of Delfina Licata. The 2022 Special Edition Report focuses primarily on COMITES Representatives – i.e. Committees of Italians living abroad. 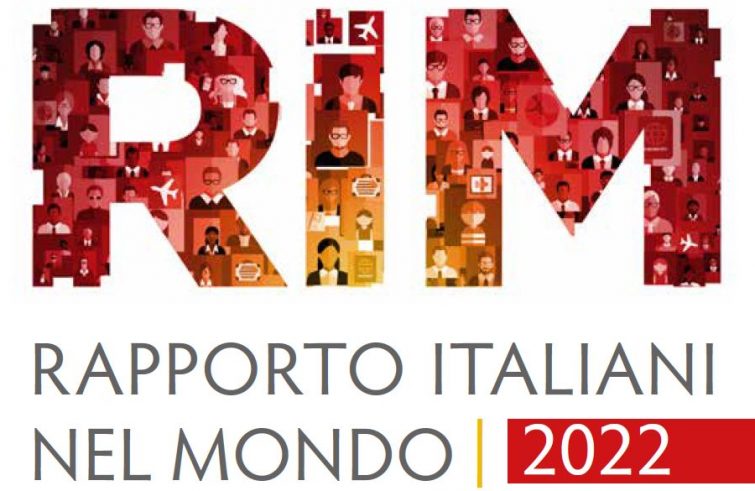 “The foreign national population resident in Italy is younger than the Italian one”,

reads the Report: in fact, “young people born in Italy to immigrant parents (‘second generation’ in the strict sense) number over 1 million: of these, 22.7% (over 228,000) have obtained Italian citizenship. If to these numbers are added foreign-born (about 245,000) and naturalised citizens (almost 62,000), the total number of children with a migratory background rises to over 1.3 million, accounting for 13.0% of Italy’s under-18 resident population.” A “very precious population”, notes the Report, “given Italy’s dramatic demographic trends, marked by collapsing birth-rates and relentless ageing population, along with the fact that the younger generations dream of living in other parts of the world, with as many as 59% of all secondary school pupils of foreign origin wishing to emigrate to other countries when they grow up, significantly more than their Italian peers (42%)”.

In addition to being intercultural,

“Italian communities abroad comprise more than 841,000 minors (14.5% of the total number of Italian nationals registered with AIRE – the Registry of Italians Residing Abroad), with many foreign-born and many more having left with their families over the past few years,” the Report states. In addition to minors, AIRE registered residents include “over 1.2 million 18-34 year-olds (21.8% of the overall AIRE registered population, accounting for approximately 42% of total number of departures each year for expatriation purposes alone)” in addition to “all those individuals leaving for education purposes and vocational training programmes – not required to register with AIRE – and those residing irregularly abroad due to non-compliance with statutory registration requirements.”

Youth mobility is increasing because Italy has been keeping young people trapped for years in “quality and competence reserves” that they could tap into, but the right time never comes.

“Two Italies”. One Italy – made of its residents and workers within its national borders – registered plummeting birth rates, while another Italy, increasingly active and dynamic, is gazing at those same borders from afar.

While Italy has lost 0.5% of its resident population in one year (down 1.1% since 2020), the number of Italians living abroad increased by 2.7% in the past 12 months – a total of 5.8% compared to 2020. In absolute terms, there were almost 154,000 new registrations abroad as opposed to over 274,000 residents ‘lost’ in Italy. The global growth rate of Italian residents abroad was lower last year, both in total numbers and in percentage terms, compared to previous years. As many as 48.2% of over 5.8 million Italian citizens residing abroad were women (about 2.8 million in absolute terms), the Report found.

These Italians convey a multi-faceted portrait of our country, which makes it intercultural and increasingly transnational, i.e. made up of Italians with various origins (born and/or raised in countries other than Italy or born in Italy to families who moved from distant countries), moving comfortably across (at least) two countries, speaking several languages, inhabiting many cultures.

The long wave of the pandemic slowed down Italian mobility.

In fact, the upward trend had come to a halt last year, when the number of departures still remained steadily over 109,000. It was therefore a mild decline, which, however, became a sharp one in the following twelve months. The trends projected to affect Italian mobility in 2020 occurred in 2021: in other words, the pandemic influenced the overall mobility of Italian nationals, drastically decreasing its volume and, once again, transforming its profile. With respect to 2021, there were 25,747 fewer registrations, representing a 23.5% drop in one year, and a 36.0% decline compared to 2020. The decrease equally involved men (-23.0%) and women (-24.0%), amounting, in absolute terms, to over 47,000 and almost 38,000, respectively.