War erupted in Bosnia 30 years ago, in the month of March. It was to be by far one of the most deadly of all Yugoslav wars. The siege of Sarajevo began on April 5. Those events bear striking similarities to the ongoing war in Ukraine and raise fears that Bosnia, due to its many tensions and instabilities, could become a new Ukraine. SIR went to Sarajevo to meet with two witnesses of that conflict, Cardinal Puljic and Msgr. Tomo Knezevic, at the time director of Caritas Sarajevo.

(Sarajevo) It seems like a déjà-vu, with the Dnieper River instead of the Drina, and Kyiv instead of Sarajevo. The first marks the natural border between Belarus and Ukraine, while the latter marks the historical border between Bosnia and Herzegovina ( BiH) and Serbia, which in a distant past formed the line separating the Eastern and Western Roman Empires.

Recalling the 30th anniversary of the start of the Bosnian war, one of the most bloodstained chapters of the Yugoslav wars, which broke out in March 1992 (until December 1995), the thoughts of Card. Vinko Puljic, Archbishop Emeritus of Sarajevo, go to Russia’s aggression against Ukraine and its besieged and shelled cities. In fact, the war against Kyiv, Lviv, Kharkiv, Odessa, Mariupol, is tragically comparable to the events that occurred thirty years ago in Sarajevo, Mostar, Banja Luka, Srebrenica, Tuzla and other Bosnian cities. His Eminence served as Archbishop of Sarajevo from November 19, 1990 until January 29 this year. His memories of the siege – experienced in person – are still vivid, as are his heartfelt appeals for peace and cessation of hostilities. He says he is “pained” by what is happening in Ukraine, “a victim” – in his words – “of the great powers, the US and Russia. The people of Ukraine, the chosen sacrificial lamb, will thus suffer its consequences. Just like rewinding the tape, the history of yesterday and that of today is a record of massacres, brutality, mass graves, ethnic rapes, hundreds of thousands of displaced persons and refugees as a result of ethnic cleansing, and thousands of deaths. As many as 100,000 in Bosnia, 40,000 of them civilians, and over 11,500 victims in the siege of Sarajevo alone.

The choice of independence. Card. Puljic’s recollections start on March 1, 1992, the day of the referendum on independence, opposed by the political representatives of the Bosnian Serbs who were against separation from Belgrade. “Thirty years ago, the Bosnians chose independence, with an overwhelming majority of over 60%. This result was disliked by Belgrade, whose threats of war turned into reality after the US and the international community recognised Bosnia’s independence. A string of horrors ensued, Belgrade thought it would be a blitzkrieg, but it proved otherwise. Only the Dayton Accords, signed in November 1995, succeeded in stopping the war by creating two internal entities in Bosnia and Herzegovina, the Muslim-Croat Federation (with 51% of the national territory, ed.’s note) and the Republika Srpska (Serb, 49% of the territory, ed.’s note). As a result – the Cardinal denounces – the ethnic cleansing perpetrated in the Republika Srpska (RS) against Croats and Bosniacs, the Bosnian Muslims, was ‘legalised.’ The latter have become the majority in the Federation, while Croatian Catholics are a minority group.  This situation remains a cause of tension and instability still today.” For the Cardinal, the Dayton Accords “have failed to create a lasting and just peace” because “they failed to establish equality among the members of the three peoples and the national minorities throughout the territory of the country”, thereby fuelling a political-institutional stalemate caused by conflicting vetoes. And looking ahead does not offer much hope either. “With the Russian-backed Republika Srpska, the prospect of Bosnia and Herzegovina joining the EU and NATO poses a major problem,” notes Cardinal Puljic. He believes that EU enlargement to include the Balkans “is only natural. The Balkans – together with Bosnia and Herzegovina – are part of Europe. But Brussels,” the Cardinal says, “must play a greater role in Bosnia.” The Siege of Sarajevo, the longest in modern history, the Cardinal concluded, “has taught me that

dialogue coupled with solidarity was and remains the only path to resolving the devastation wrought by armed conflict.

For a long period during the siege, I was the only religious leader present and I tried to help all people with no distinction, instilling hope, consolation and courage to carry on. The people were always very close, but hatred and political propaganda, circulated by the media, have caused divisions.” 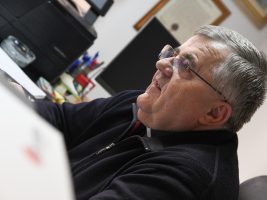 Prepared to wipe away the tears. The memories of Card. Puljic are echoed by those of Msgr. Tomo Knezevic, now director of Caritas Bosnia, head of the diocesan Caritas office during the siege of Sarajevo. “During the four-year siege we were the only ones allowed to come and go from the city for the provision of humanitarian aid. We had permission from the Serbs who besieged Sarajevo. That was because – they told us – we were helping everyone. We had silently carried out our charitable activities during the many years of Communist dictatorship and, when the war broke out, we were prepared to offer our assistance. We were also prepared to wipe away the tears of those who came to us for help. The story of Msgr. Knezevic, who lost 35 family members and close relatives in the Bosnian war, unfolds through the streets of Sarajevo, where every corner brings back memories. “This is where our Caritas food warehouse used to be. We had to drive up to 130 km/hr to avoid being shot by snipers.” We reach the memorial for child casualties, the Markale outdoor market: “I arrived just a few minutes after the massacre and found battered bodies, the wrenching pain of the wounded, and blood everywhere. It was once a gathering place, where nothing was sold anymore because there was nothing to sell. People used to meet there as a way of rediscovering a glimpse of humanity and life during the days of the siege.” Lives torn to shreds. Walking through Sarajevo thirty years after the siege is a pilgrimage amidst gravestones, memorials and cemeteries spread throughout the city. “We would bury the dead at night or when there was fog – recalls Msgr. Knezevic – in the daytime it was dangerous because snipers would shoot at us. Public and private gardens and every suitable space were the sites for burials.” The ”roses of Sarajevo” – i.e. the holes left in the asphalt by Serb mortars and artillery, coloured red, like rose petals,- testify to the death of a person on that very site. During its 1425-day siege (from April 5, 1992 to February 29, 1996) Sarajevo experienced the single largest siege in modern history with 11,541 people killed and about 50,000 wounded. 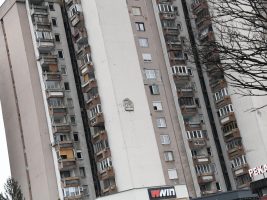 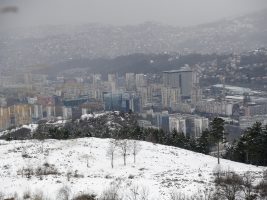 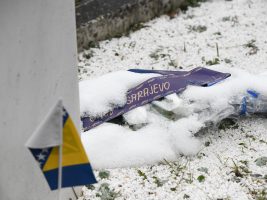 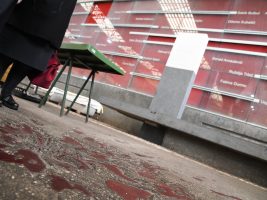 Thoughts go to Ukraine. We drive to where the Serbian checkpoints used to be. Memories come flooding back: “This is where the long convoys of pick-up trucks and automobiles used to come and go. We were never shot at. I remember getting out of the car myself to ask the Serb soldiers to remove the roadblocks, the barbed wires, that prevented our passage, or to show us where the anti-tank mines had been positioned along the road. Only after it was made safe could we proceed to Croat controlled areas, such as Kiseljak. People were often hidden in our convoys trying to get out of Sarajevo, there were Serbs, Croats, Bosniacs, and others hoping to escape to freedom. Many managed to get through, but the fear of being discovered was overwhelming each time. Only when we returned with food and supplies did my anxiety subside. We also brought oxygen cylinders to Sarajevo’s hospitals and delivered the mail.” A long drive outside Sarajevo led to the entrance to the tunnel, a 700-metre underground route linking the city, surrounded by Serb troops, to the airport located in the UN-controlled neutral zone. It was known as the “salvation tunnel.” “The war took away thirty years of life from Bosnia and its people”, says the director of Caritas, adding that he has not forgotten those who “helped us during those years, such as the Italian pacifists and voluntary workers who lost their lives in the process”. Thirty years have passed, and the consequences of the war are still there, “all it takes is for a firecracker to be thrown on the ground, and the fear returns, along with all the memories of those horrible events. Today our thoughts and hearts are with the people of Ukraine who are suffering the same horrors we experienced thirty years ago. I know what it means to have no food, no medicine, no water, no clothes, no electricity – we experienced it first-hand. Pope Francis keeps repeating in his appeals for Ukraine: ‘rivers of blood and tears are flowing’. Today just like yesterday in Sarajevo, where people fear that Bosnia could turn into a new Ukraine.

“To all the inhabitants of the besieged cities of Ukraine, such as Kyiv, I say: dear friends, we are suffering with you, we are dying together, there will be a Resurrection, those who oppress you are miserable. Have faith in God and in freedom.” 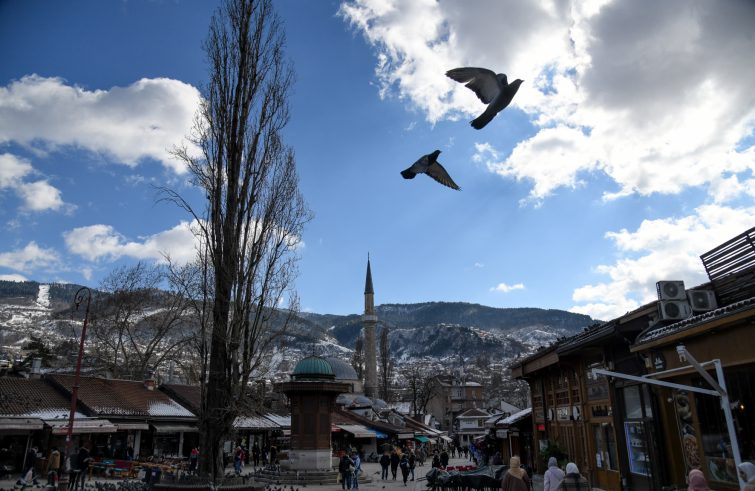