Kirill Martynov is the Deputy Editor of Novaya Gazeta, the longest-running independent newspaper by Russian journalists on the territory of the Russian Federation. After years of struggle and six editors killed, on March 28 the editorial staff decided to discontinue the printed and online publications of the newspaper "until the end of the special operation on the territory of Ukraine", due to pressure from Roskomnadzor, the Russian communications supervision agency.

Kirill Martynov, Deputy Editor of Novaya Gazeta, leading independent Russian newspaper edited by Russian journalists in the Federation, is among the many citizens who left Russia as a result of the repressive climate created by Putin’s regime. After years of struggle and six editors killed, on March 28 the editorial staff decided to suspend the printed and online publications of the newspaper “until the end of the special operation on the territory of Ukraine”, due to pressure from Roskomnadzor, the Russian communications supervision agency. On April 1, the editorial staff and correspondents, approximately eighty altogether, celebrated the 29th anniversary of the newspaper’s foundation, a guardian of freedom of thought and expression. Martynov was among those who (sadly) toasted from a distance. He fled to Europe to seek new avenues as a free man, but also to ensure the future of his newspaper and of the Free University of Moscow, which the 41-year-old journalist, a former professor of philosophy, was a co-founder of. One of his concerns is the future of many young Russians who firmly believe in the democratic potential of Russia. SIR contacted him over the phone. 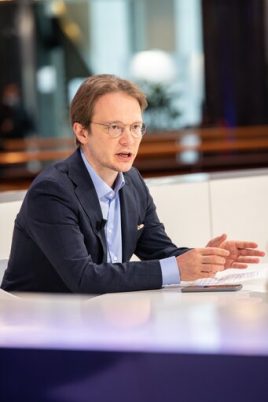 Was the decision to discontinue the newspaper a tough one?

It was tragic. We never spoke of shutting it down but of ‘suspending’ it because we still have our website, offices and editorial team. I myself am not so optimistic, but some in the editorial staff, the senior editors, believe that we will be able to resume from Russia.

Our newspaper had faced difficult times already in the past, like when we reported on the two wars in Chechnya, in strong opposition to the Kremlin. On that occasion many of our Russian subscribers stopped reading it since we had taken a rather unpopular stance. But nonetheless, the newspaper lived on. A solution might be found in some other format.

Does being forced to suspend your publications mean that Putin’s strategy of repressing freedom of thought is working?

I don’t know whether it was intended as a strategy. In fact his goal was to win the war and allow the continuation of a small number of independent newspapers. However, the actual developments on the ground are not as he had expected, which makes censorship necessary. It was rumoured that Putin’s regime was keen to maintain a spotlight on independent media, which is why the Echo Moskvi radio station, the Dozhd newspaper and ours were still active. They may have wanted to exploit us, but we were aware of it.

But now the whole situation has turned out so badly for the Kremlin that they can no longer afford to have even a shred of independent information, and have therefore decided to shut down all independent news sources. They even tried to block Wikipedia because it portrays the events in Ukraine as an invasion, which is nothing but the truth.

Recent data from the Levada Statistics Institute shows that 81% of the population supports the Russian armed forces’ military intervention in Ukraine. How do you interpret this finding?

I tried to ask the Levada sociologists how many people refused to answer the question regarding support for “special operations”, as they are referred to in Russia. In my opinion – although I have not received an answer so far – many people simply declined to respond and the answers came mainly from those who agreed with the Kremlin’s policy. So we need to verify the numbers. In any case, the fact that 20% of people in a fascist regime like the Russian one today oppose the war is no small thing, considering the absence of democracy and public opinion. We only have people who are afraid. If this is the case, then it is possible to work on increasing the number of people who are not supporting this war.

Why is democracy struggling to thrive in Russia and why is the opposition unable to impose itself?

There are many reasons, but I think that the main reason is rooted in the legacy of the Soviet regime. Individualism is very widespread: people tend to only care about their personal matters and nothing more.

Political movements are seen as instruments for manipulation and politics is seen as dirty business.

Thus people try to lead a normal life, trying to ignore what is happening all around them, what can be termed as political absenteeism. It worked fine for decades, when people’s incomes were growing, until the Crimea crisis.

How can a change take place?

I have a feeling that what is happening now amounts to the actual collapse of the USSR. The USSR came apart with the wars on the borders of the Soviet empire thirty years ago, but not in Russia. It is falling apart today. The underlying explanation for the possibility of war is not only because of Putin. In fact, we deceive ourselves into believing in a widespread imperial mentality, which makes us feel superior to any ordinary European country, as if we were a great power playing a role on the global stage. In Putin’s understanding, the US controls Europe, China controls another part of the world and Russia must have its share, for the sake of historical justice. The Russian people are not interested in knowing the truth and the reality of the situation, because it would prompt many questions, while the propaganda – including on this war – is reassuring. A cultural change will only come about with the renewal of national identity: it is likely to be a long and tragic process, possibly leading to the dissolution of the Russian Federation.

How have you been holding up over the last few weeks?

I was glad to be able to be with my family and the people I love, but I am also very angry about what is being done to our country, and especially about what they are doing to Ukraine. I love Ukraine, I have many friends in Kiev and other Ukrainian cities. Most of them are now fighting in the territorial defence forces.

It feels as if it were my own personal war. Had I been a soldier, I would have found other solutions, but I am a journalist and a teacher, so I try to make myself useful in this way. I feel that a community of Russians who share European values can be re-created. This gives me hope and some confidence, and it also gives me a sense of responsibility in creating a new community of values, one that views war as a terrible solution.

You spoke with members of the European Parliament a few days ago: what is your view of the EU and what are you asking of Europe?

During the meeting I said that we now understand why the EU was created, a confederation of republics that strongly oppose war, after a centuries-long European history of war. I also highlighted the message of a united Europe. In a strange way I feel at home in Europe and I feel European, although I have Russian citizenship, since it is natural to live and share European values. Perhaps Europe can help us recreate a political community of anti-war Russians.

You are also among those who founded the Free University of Moscow in 2020, described as “an independent academic institution, unconstrained by pressure and censorship.” It is now supported by some one hundred lecturers and offers free online courses to hundreds of students. Will this experience continue?

I am very proud of this project because we are probably the only Russian educational institution with strong anti-war convictions. I hope we will be able to help teachers and students who are presently being oppressed in Russia and establish connections with European universities.

I was fired from the Higher School of Economics two years ago because of my political views, but in retrospect it was a good thing, since I would otherwise be a lecturer there now and it would be difficult for me to remain silent today. But I am a free person. And maybe in this crisis new paths are opening up for us.

Would it be dangerous for you to return to Russia?

I don’t know if I will be able to return in the coming weeks, months or perhaps years. There was also an incident on February 26. I was lecturing my students at a state university in Moscow about the evils of war when the father of a student connected online overheard me and said that my words were punishable by law and that I was a traitor. The Dean of the department emailed me after a couple of days and I realised that I was exposing the entire department to potential difficulties, so I decided to suspend the course. The Russian education system is facing a moral disaster.

What do you hope for?

I trust in Russian youths. Hundreds of thousands of young people there want to live like in a European country, they want to travel, study, they want sexual freedom, and I feel that in this situation they are our allies. No Russian regime can destroy them because although they are a minority, in absolute terms they are many and they are young, so they have a long time ahead of them.