The late President of the European Parliament was part of a group of friends drawn together by journalist Paolo Giuntella, a Roman Catholic intellectual expert in Presidential affairs for RAI. "David was there for me when my father died", said the journalist, who works in Brussels. “We understood each other with a glance"

“Me and Irene understand each other with a quick glance. That’s how it is among friends.”  Those were David  Sassoli’s words the last time we ran into each other in the corridors of the European Parliament in Brussels. Since his election as President of the European Parliament, all eyes were on him, and I tried not to be too conspicuous, I wanted to avoid rumours and interference.

David was a great brotherly friend of my father Paolo, and was very close to me and supportive when he passed away. Perhaps David was one of the few people who realised how devastated I was by the loss of my father at such a young age. He could understand me just by looking at me, without needing an explanation.

David was part of a group of young people drawn together by my father, who was older than them. When I was a child, I was sometimes jealous of these young people visiting my father around the clock at our house in Rome or in the countryside, in Capranica, which is still a meeting place for his lifelong friends. Among them were David Sassoli and Massimo De Strobel, who would later become colleagues.

My mother used to tell me that when they were newly weds a particular whistle could often be heard under the windows of the house. My father would glance out of the window and invite them inside. 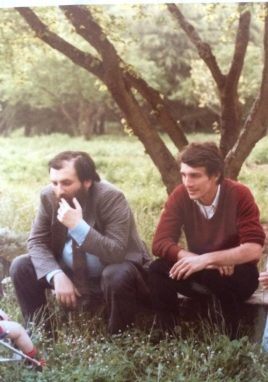 Before their marriage, the house had been nicknamed the Bunker, perhaps on account of the chaotic piles of records and books in every room, and also because it was a crucible of thought as well as of laughter and merriment.

The Bunker had also been the meeting place for boys and girls who had campaigned for my father when he ran in the 1976 municipal elections. Father was defeated in the elections, but he often said that it had been an enriching experience in terms of the people he had met and the friendships he had made, first and foremost with Don Luigi Di Liegro.

He would literally give lectures to that group of young people, summarising the teachings of French Catholic thinkers, passed on to him by his father, my grandfather Vittorio.

David was among the most assiduous participants, as he recalls in the beautiful preface to the book “Il gomitolo dell’alleluja “.

“In dribs and drabs, with his very special way of bursting into our lives, Paolo Giuntella imparted vital precepts that we would learn by heart.” He raised us children according to those same precepts. These included: there is no middle ground between justice and injustice; privileges received must be returned with a commitment to be at the service of the weakest; non-violence; study and proficiency.

Over the years, my father’s long-time friends, those young people, became a point of reference, members of the family for us when father passed away. With time, I learnt how beautiful it is to have special friendships woven into your life, those friendships that will last forever, that help change the world for the better, because great friendships are an overwhelming force. We laugh together and cry together.

David was always there in moments of happiness. But also in sad times he never left us alone.

He guided me to the discovery of Brussels and supported me over the years with great discretion and reservedness. He would gently chide me when I would not visit him so as not to disturb him at Parliament. He always wanted to know how I was, and encouraged me to persevere even in the most difficult situations. Every now and then I would seek his advice and he would be there for me, despite his busy agenda.

By observing him, I learnt that one can remain modest despite being a prominent figure, that it is possible to love someone for a long time, as he did with his wife Alessandra, whom he met in high school, and to be an institutional figure, to have meetings with the highest authorities, and not be conceited… To remain in the same family home with the same group of friends.

I remember when in high school I attended a summer camp of the student unions and he came to speak as a journalist. As always, I hoped to remain unnoticed, I didn’t want to give the impression of ‘having connections’.

He greeted me in front of everyone, taking me by surprise, and then joined me and the other students for dinner.

More than once over the years he played these ‘tricks’ on me. On the day of his appointment to the European Parliament he celebrated with a few friends and many family members with a cake reminiscent of Cinderella’s fairy tale. When he toasted, he said: “eventually it all reverts to the original pumpkin state.” What he meant was, let’s not lose track of reality. We are here to do hard work, and reached it with a magic wand, but eventually we will have to return to our previous lives, or rather, remain the way we always were.

David remained the same always. In Brussels he befriended a Senegalese boy, Momo,

who worked at the supermarket and had lived in Italy for several years before moving to Belgium. One day Momo discovered that David was Italian. They started talking about this and that and since then they would chat every time David went shopping in the supermarket. Momo had no idea that David was the president of the European Parliament. But after speaking about his new Italian friend to his friends, Momo learned that he was the President of the European Parliament. One day, not knowing that I knew David, Momo told me about this new important friend of his, David. He was very worried because he had not seen him for the past few months, he read that he was sick and hoped he would soon see him again at the supermarket.

David was also this: guided by humaneness he opened doors, including those of the European Parliament, and spoke to everyone. I hope we will continue to cry and laugh together, about David and father, both of whom have played a big trick on us.