"When people ask me what war is, I think of mud. Dozens of kilometres of mud.” Father Andriy Zelinskyy, military chaplain of the Greek-Catholic Church of Ukraine, has been working for years alongside soldiers in border zones. Contacted by SIR, he recounts the experience of living in the trenches. The diplomatic forces around the world are concerned about the escalating tension in the area. Talks between NATO and Russia did not go well, while Kiev is currently undergoing a large-scale cyber attack

“The front line extends for 437 kilometres, covering a variety of landscapes and climatic conditions from the Sea of Azov to the forests of Lugansk. When people ask me what war is, I think of mud. Dozens of kilometres of mud.” In a phone interview with SIR, Father Andriy Zelinskyy, military chaplain for the Greek-Catholic Church of Ukraine, a Jesuit priest, describes life in the trenches on the eastern border zones. The third round of diplomatic talks between NATO and Russia in Vienna made little progress. Speaking at the inaugural ceremony of the Polish chairmanship of the OSCE Permanent Council, Poland’s Foreign Minister Zbigniew Rau warned: “It seems that the risk of war in the OSCE area is now greater than ever before in the last 30 years.  For several weeks we have been faced with the prospect of a major military escalation in Eastern Europe. We should work towards ensuring security in the region immediately.” Father Zelinskyy remarked unperturbed:

“The Ukrainian army, and the country as a whole, have been facing an eight-year war. This is hardly news to us.

Ukraine, soldiers in the trenches on the Ukrainian-Russian border 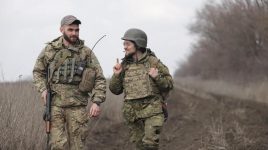 “Nor is it news that Russia has been massing troops on the Ukrainian border. Ukraine is struggling to defend its borders and the Ukrainian army is prepared and ready for action. What’s new for us is the fact that while Ukraine has suffered the loss of many of its men, the rest of the world and the international community – from the European Union to the United States – have decided not to see what was and is happening. This indifference was a great moral wound for us, because we felt abandoned. Compared to eight years ago, today we no longer feel alone. We perceive the support of the EU countries and the US, not only in words but also in terms of a political commitment to finding diplomatic solutions, and this is very important.”

But the stalemate in the talks heightens the risk of a Russian invasion of Ukraine. National Security Advisor Jake Sullivan is concerned about this. Also the government of Lithuania, which borders Russia along a stretch of the country, has voiced concern. Father Zelinskyy describes the atmosphere of tension in the trenches. The military forces are deployed on the front lines with soldiers averaging 30 years of age. “Some situations can generate fear,” says the priest, “like when a device explodes. There are no outright clashes, but every now and then a few shots are fired and this leads to fear. But war is not only about that.

War is also spending days, even 8/9 months, in the trenches, far from everything, in the mud and the cold, with the constant threat of being caught, of being killed. Over time, all this adds pressure to people and wears out their mental balance.” 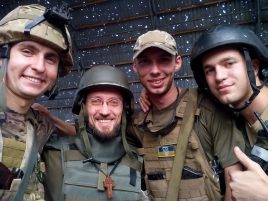 Ukraine, soldiers in the trenches on the Ukrainian-Russian border

The border areas are barren wastelands. “Everyone has left. Many families preferred to move to safer places. The elderly, who cannot and do not want to leave their homes, have remained in the villages”.

According to reports released today, a number of Ukrainian government websites are undergoing a large-scale cyber attack. From Kiev, Father Zelinskyy confirmed that only generic information is reaching Ukraine and that there is currently no claim as to its origin. In light of the diplomatic impasse, the Jesuit Father makes an appeal to Europe.

“All I can say is: the time has come for you to wake up. We have already done so.

“We have been experiencing war in Ukraine for eight years already. We see it in people’s eyes, in the funerals we celebrate. But beware: Russia is not waging war on Ukraine – its ambitions are greater, they extend beyond our country. The international community must wake up. The future depends on all of us. If we face it together, we will succeed. If not, the consequences will be serious, not only in Ukraine.” 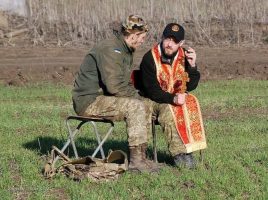 The Church’s main role in the country is to be at the service of and to support people – “The Church is needed”, the Jesuit said. “The Church, in all her various manifestations, is at the service of the inherent humanity of every human being, and to protect human life from all forms of violence. The Church is especially close to those whose humanity is most threatened: the military, the poor, the displaced. That is the spirituality of the Church of Kiev: to be amongst the people.