Pope Francis has returned to Lesbos after five years to send yet a further appeal to the international community not to turn its back on the plight of migrants, which is “an issue for the world." Looking children in the eye is the first step towards preventing our Mediterranean Sea ("mare nostrum") from being transformed into a desolate sea of death ("mare mortuum"). No to the indifference that kills, to the cynical disregard “that nonchalantly condemns to death”

“If we want to start anew, we must look at the faces of children. May we find the courage to feel ashamed in their presence; in their innocence, they are our future.” From the island of Lesbos, where he wished to return after five years, on his visit to the refugees hosted in the “Reception and Indentification Center” in Mytilene, the Pope asked Europe and the world not to look the other way and to acknowledge the plight of migrants, which is “an issue for the world.” We must look at their faces, for the Christian programme, as Pope Benedict XVI has written, “is a heart which sees.” Their faces “challenge our consciences and ask us: ‘What kind of world do you want to give us?’”. “Let us not hastily turn away from the shocking pictures of their tiny bodies lying lifeless on the beaches”, Francis said, evoking the image of young Aylan, the Syrian child who died on Turkey’s shores.

“The Mediterranean, which for millennia has brought different peoples and distant lands together, is now becoming a grim cemetery without tombstones”, Francis denounced yet again: “Let us not let our sea (mare nostrum) be transformed into a desolate sea of death (mare mortuum), Let us not allow this place of encounter to become a theatre of conflict!. Let us not permit this ‘sea of memories’ to be transformed into a ‘sea of forgetfulness’”.

Opening his speech, the Pope addressed directly the approximately 200 refugees present, greeted one by one upon his arrival: “I am here to see your faces and look into your eyes. Eyes full of fear and expectancy, eyes that have seen violence and poverty, eyes streaked by too many tears.” Before leaving, the Pope made a stop at some of the dwellings in the Kara Tepe refugee camp, walking amongst the white container houses that shelter more than two thousand people. The Pope’s visit to this far corner of Greece, home to a constant influx of migrants amidst the indifference of the rest of Europe, started with the faces of the migrants and ended in the same way, with Bergoglio acting on what he has been repeatedly asking of the international community. 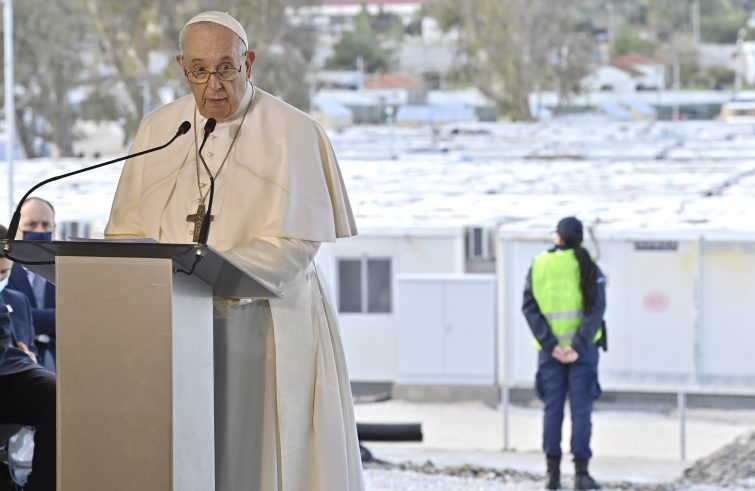 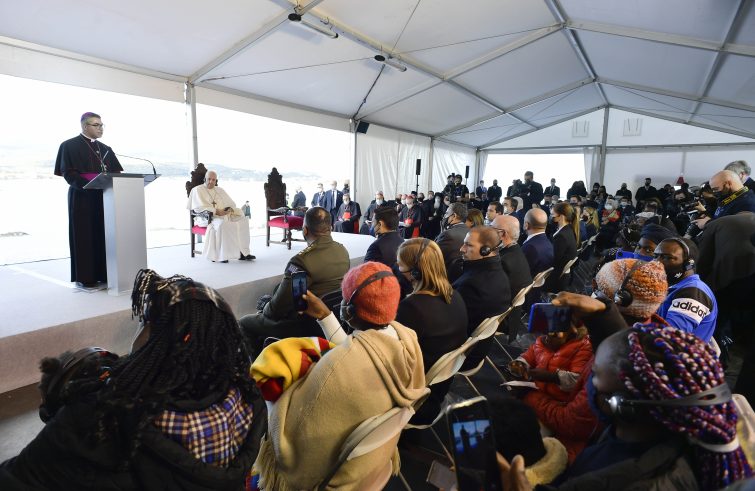 “Please, let us stop this shipwreck of civilization!”,

the Pope’s appeal expressed in prayer: “On the banks of this sea, God became man. Instead, he is offended when we despise the men and women created in his image, leaving them at the mercy of the waves, in the wash of indifference, justified at times even in the name of supposedly Christian values.”

“History teaches us that narrow self-interest and nationalism lead to disastrous consequences”,

the Pope remarked: “A firm determination to respect the dignity of other individuals and peoples along with the deliberate practice of fraternal love are absolutely necessary for the achievement of peace.” “what is needed are not unilateral actions but wide-ranging policies”, is the course of action, to be primarily pursued by Europe:

“Let us stop ignoring reality, stop constantly shifting responsibility, stop passing off the issue of migration to others, as if it mattered to no one and was only a pointless burden to be shouldered by somebody else!.”

“Your faces and your eyes beg us not to look the other way, not to deny our common humanity, but make your experiences our own and to be mindful of your dramatic plight.” In his exhortation to resolve the plight of migrants, the Pope cites Elie Wiesel, “a witness to the greatest tragedy of the last century”, with an appeal to

“overcome the paralysis of fear, the indifference that kills, the cynical disregard that nonchalantly condemns to death those on the fringes!”

After five years, “little has changed with regard to the issue of migration”, Francis pointed out. “this country, like others, continues to be hard-pressed, and that in Europe there are those who persist in treating the problem as a matter that does not concern them”, the Pope denounced: “How many conditions exist that are unworthy of human beings! How many hotspots where migrants and refugees live in borderline conditions, without glimpsing solutions on the horizon! Yet respect for individuals and for human rights, especially on this continent, which is constantly promoting them worldwide, should always be upheld, and the dignity of each person ought to come before all else!.”

“It is distressing to hear of proposals that common funds be used to build walls and barbed wire as a solution”, the Pope said. “In various societies, security and solidarity, local and universal concerns, tradition and openness are being ideologically contraposed. Yet problems are not resolved and coexistence improved by building walls higher,

but by joining forces to care for others according to the concrete possibilities of each and in respect for the law, always giving primacy to the inalienable value of the life of every human being.” 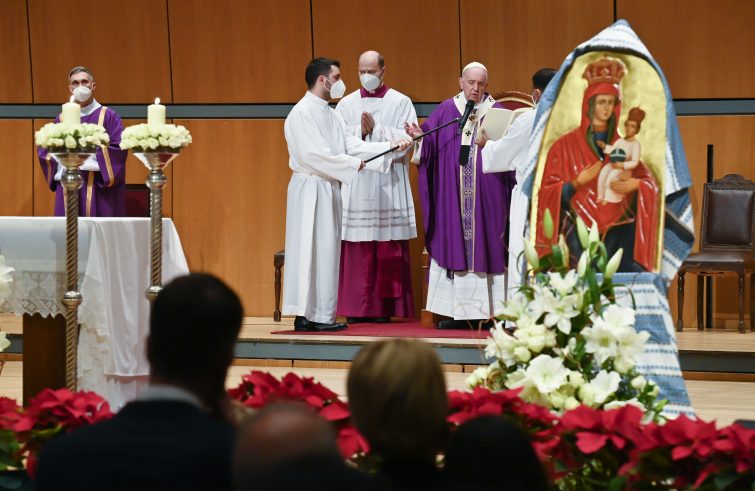 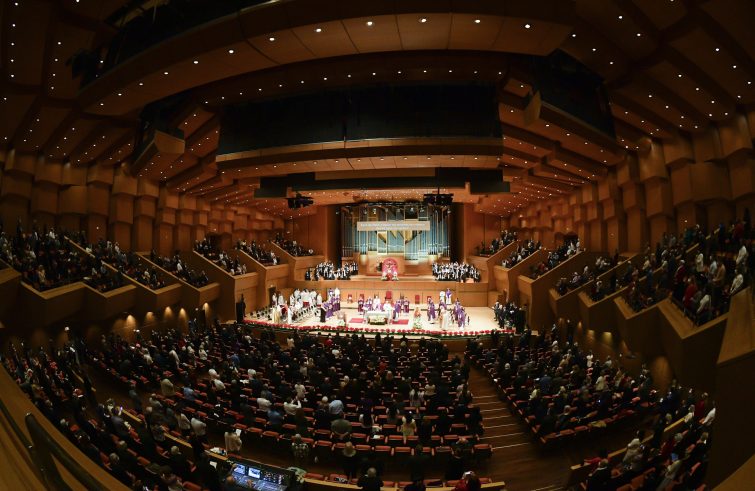 “It is easy to stir up public opinion by instilling fear of others”, Francis remarked: “Yet why do we fail to speak with equal vehemence about the exploitation of the poor, about seldom-mentioned but often well-financed wars, about economic agreements where the people have to pay, about covert deals to traffic in arms, favouring the proliferation of the arms trade?”. “The remote causes should be attacked, not the poor people who pay the consequences and are even used for political propaganda!”, the appeal: “more is needed than merely patching up emergency situations.” It is necessary to “overcome ghettoization and foster a slow and necessary integration.” In the Holy Mass at the Megaron Concert Hall in Athens, attended by the small Catholic community accounting for about 1% of the population, the Pope called on the faithful to “think more deeply of the paradox of the desert”, urging to “to ‘think beyond’, to go beyond our usual ways of thinking”: ” It is for this hope that the deserts of today’s world are thirsting.”