"I find it beautiful that St Francis' fellow citizens should be the first to be offered the 'pardon' that the Saint secured for all. This pilgrimage is in line with a specific commitment under our diocesan pastoral plan. In fact, this year we wish to fulfil the mission of spreading the Gospel in people's homes, in keeping with the Amoris laetitia Family year”, the bishop said, referring to the ancient tradition of undertaking a foot pilgrimage from the city centre to the Basilica of Saint Mary of the Angels

“Starting afresh from the Portiuncula, starting afresh from the Gospel” is the new Pastoral Letter written by Msgr. Domenico Sorrentino, Bishop of Assisi-Nocera Umbra-Gualdo Tadino. It is also an invitation addressed to the diocese on the path “towards the new pastoral year and the Eighth Centenary of the death of St Francis.” The Letter marks the occasion of the “Pardon of the people of Assisi“, an ancient tradition that involves a foot pilgrimage from the centre of the city to the Basilica of Saint Mary of the Angels, starting at 5.30am. Msgr. Sorrentino spoke to SIR about the Pardon of Assisi and the missionary impetus stemming from the Portiuncula. 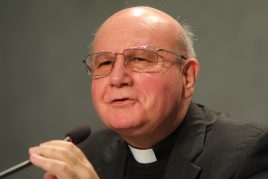 Your Excellency, why have you decided to resume the tradition of the pilgrimage of the people of Assisi on 1 August this year?

These past few years offered several opportunities to rediscover the grace of the Porziuncola Indulgence. On August 4, 2016, during the 8th Centenary of the Pardon, Pope Francis was himself a pilgrim at the Porziuncula. By tradition, on the afternoon of August 1, a delegation of the City of Assisi, including its local authorities, makes a pilgrimage to the Porziuncola. Our intention has been to increase this afternoon pilgrimage. We have now recovered a long forgotten tradition: the “pilgrimage of the people of Assisi”, held in the early hours of the morning, which we shall re-establish. I find it beautiful that St Francis’ fellow citizens should be the first to be offered the ‘pardon’ that he secured for all. This pilgrimage is in line with a specific commitment under our diocesan pastoral plan. In fact, this year

we wish to fulfil the mission of spreading the Gospel in people’s homes, in keeping with the ‘Amoris Laetitia Family’ Year’ launched by the Pope to give renewed impetus to the fundamental value of the family.

Embarking on this journey, including physically, is a momentous sign.

The Feast of Pardon this year coincides with the eighth centenary of the Chapter of the ‘Regola non bollata’ (the Earlier Rule), marking a significant moment in the journey towards the centenary of the death of St Francis (2026). How is the Church and the city of Assisi preparing for this date?

At Pentecost eight hundred years ago, a general chapter of all Friars Minor was celebrated at the Porziuncula, with the participation of about 3,000 Friars from all over Europe. St. Francis wished to provide them with a Rule that had the character of the Gospel. It went down in history as the “Regola non bollata” (Earlier Rule), to distinguish it from the Rule subsequently approved by the Pope (Regola bollata).

That first version proposed by St Francis remains a very inspiring document, an impetus for all – not only for the friars – to rediscover the Gospel.

It is a wonder to read it, because it is structured as an interwoven collection of passages from the Gospel. That Chapter was a major event not only for the Franciscans but also for the people of Assisi, who worked hard to ensure that the friars had what they needed, and were rewarded by St Francis’ words. This marked the start of the last five years of the Saint’s life. We too are now approaching the centenary of his death, which we look forward to living in harmony with other interested dioceses and all the Franciscan families.

What does it mean for Assisi to be the birthplace of Italy’s Patron Saint? And what is its mission today?

Assisi “lives” with St Francis, but it cannot limit itself to being “proud” of one of its greatest sons. It must be touched by his charism and transform it into a testimonial for the many pilgrims and tourists arriving here. This great spiritual heritage has been extensively revived in recent years, with events that continue to enhance the city’s appeal. There was a need for this, given the current situation. When St Francis was declared Patron Saint of Italy in 1939, our country proclaimed itself Catholic, to the point of making this connotation an instrumental emblem of the authoritarian regime. What has become of Catholic Italy over the past century?

Today it is necessary to proclaim the faith anew.

The “mission” of Assisi is to welcome all those who are seeking spiritual renewal and to do so with inner involvement and living witness as best as possible. Succeeding in this enterprise is not easy. But it is our great responsibility.

According to St Francis, the Church is reborn when she is immersed in the Gospel. The Church perishes when she distances herself from it. That is what Pope Francis keeps telling us today. Will this year’s Pardon of Assisi help the Church renew her missionary thrust in an increasingly secularised world?

I very much hope so. Our pastoral plan has long called for a renewed missionary zeal in our way of being Church.

We must be a Church that returns to be present in the streets, in homes.

Our Gospel Families project aims precisely at this. In the Chapter of the Earlier Rule, St Francis laid out a missionary plan, with his friars being sent throughout Europe. Returning to the Gospel reveals its continuing response to the innermost yearnings of the human heart. Admittedly, secularisation is watering down religious sentiment, the Internet inundates us with messages that often have little to do with God. However, at some point we all need to reflect, to pause for breath. That is when the voice of God comes to us loudest. We must scatter and sow the Gospel with full hands, in the knowledge that the Lord anticipates us in our hearts.

In an increasingly polarised society – suffice it to mention the controversy over vaccines – what is the value of forgiveness today? What lessons can be learned from St Francis?

It is sadly ironic that in the Internet age, which connects us worldwide, human relationships are rapidly deteriorating. There is too much mistrust, detachment and conflict. We must rebuild friendly and fraternal relationships.

The experience of God’s forgiveness – overflowing forgiveness, as in the Porziuncola indulgence – may help  tenderise our hearts.

What is really needed is a high degree of humbleness and compassion in order to restore the best atmosphere for living together. This also applies to the Church.

St Francis is a great teacher of communion.

It was no coincidence that the Holy Father signed his Encyclical ‘Fratelli tutti’ before the tomb of St Francis of Assisi. Now is the time to pursue human fraternity in earnest. This theme has also had a “secular” aspect since the French Revolution, but its true roots and lifeblood can only be found when we all remember that we have only one and the same Father.