The Holy Land Coordination bishops met yesterday with the heads of Caritas Jordan in Madaba committed to aiding and assisting refugees who entered the country after the recent wars in Syria and Iraq. The Hashemite Kingdom is the second host country of refugees per capita in the world

(Madaba) “Not refugees, but guests”: Wael Suleiman, director general of Caritas Jordan, thus describes the approach adopted by the Hashemite Kingdom in the reception of Iraqi and Syrian refugees fleeing wars, political instability and economic crises. Such generosity and openness dates back a long time, to when Palestinian refugees first arrived in Jordan, immediately after the Arab-Israeli wars of 1948 and 1967. The estimated number of Palestinian Arabs in Jordan today exceeds three million, most of them naturalised Jordanians. 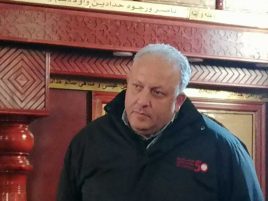 Jordan re-opened its doors in 2014, this time for Iraqis. Approximately 90,000 refugees arrived after the invasion of the Islamic State (UN estimates), 11,000 of whom Christians. Then it was the turn of the Syrians, an unrelenting exodus caused by the war that broke out in 2011, resulting in the arrival of roughly 1.3 million refugees at King Abdullah II’s homeland. Of these, 700,000 were registered as asylum seekers with UNHCR. Jordan is also home to several thousand foreign workers from 43 different countries. These figures make Jordan the country with the second highest share of refugees compared to its population in the world.

A culture of hospitality. The Holy Land Coordination bishops, presently in Jordan for their annual solidarity visit to the Christian communities of the Holy Land, met with Suleiman yesterday in the premises of the Melkite church of Madaba. “In our cultural tradition,” explained the director of Jordanian Caritas, “we are taught that guests stay with us until they reach their final destination. And that they must be given all they need for a life of dignity.”

Supported by a network comprising 25 centres in 9 Governorships, employing 400 staff members assisted by 3,000 volunteer workers, Caritas Jordan is at the forefront of efforts for providing all refugees and vulnerable people with access to health care, education, vocational training, accommodation, food and drinking water. This commitment is concretised with the help of the Churches and foreign countries such as Italy, France, the USA, Germany, Spain and many others.

Planning for the future. “Unfortunately, offering support is not enough, now is the time to reflect on these people’s future. And we believe that their future is primarily connected to the places where they were born, where they grew up, where their loved ones live”, Suleiman said.

“Their future is their country of origin. It is therefore necessary to work in this direction, since it’s the only way to restore the dignity they lost due to wars, sectarian violence and economic and social crises.”

Yet, the refugees’ hope of returning to their home countries is shattered when confronted with reality: “Only a few of them wish to return to their homeland. Iraqis see no safety or stability in their country, there are no jobs, and their homes in the Nineveh Plain and in Mosul have not been rebuilt. Conversely – said the Director of Caritas Jordan – here Jordanians feel protected and have integrated into society. In the past few years, almost 100 families have left for Italy thanks to humanitarian corridors promoted by the Italian Bishops’ Conference. They have been hosted in various dioceses and today they are happy. The humanitarian corridors will be resumed in April, this time for some 200 Iraqis and Syrians.” The latter “have no intention of returning to their home country where they now own nothing,” Suleiman pointed out. Their homes and property have been destroyed. The country is currently facing extreme poverty, it would be hard to return in such conditions. Also political opponents of President Assad in Syria have fled to Jordan. To them, returning means putting their lives at risk.”

Risk of social tensions. While hospitality and welcome are highly valued in Arab culture, tensions between the Jordanian population and the refugees are also present in the Hashemite Kingdom. Such strained relations were exacerbated by the pandemic. The blockade imposed by the Coronavirus caused a slowdown in the local economy, with unemployment soaring to almost 23%, and youth unemployment to 50%. As a result, a ‘war between poor people’ is not a remote possibility. The response of Caritas remains the same: helping everyone without distinction. Three projects aimed at creating jobs for refugees and the most vulnerable Jordanians are in the pipeline. They will be submitted to the Italian Bishops’ Conference and the archdiocese of Bologna, headed by Card. Matteo Zuppi, who also serves as president of the Italian Bishops’ Conference. In addition, a number of initiatives aimed at educating and training Iraqi and non-Iraqi refugees in the areas of agriculture, carpentry, packaging, and mosaics are ongoing. In this respect, the bishops of the Holy Land Coordination visited the “Mosaic Garden”, a workshop located in the Melkite parish of Madaba, a town with a great tradition of mosaics and famous for the “mosaic Map of Madaba”, a floor mosaic in the early Byzantine church of St. George, depicting the Holy Land and Jerusalem. 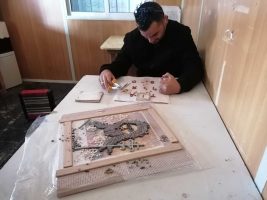 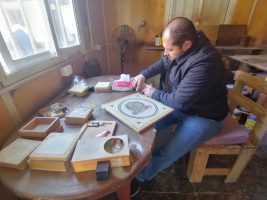 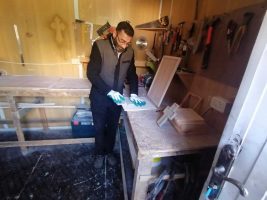 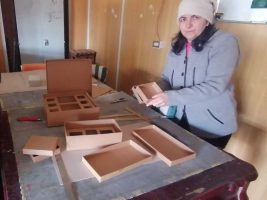 The Holy Land Coordination (HLC), operating since 1998, comprises bishops from all over Europe, North America and South Africa. It was created at the request of the Holy See for the purpose of visiting and supporting local Christian communities in the Holy Land. The action of the Holy Land Co-ordination focuses on the three ‘P’s: “Prayer, Pilgrimage, Persuasion and Presence.”