The story of Amjad, political refugee from Syria, his new life in Italy and his dream of seeing his country free and democratic and out of the war. Amjad was among the first to take to the streets in Daraa, in 2011, calling for increased rights and freedoms, but he was forced to flee abroad. His is an act of accusation against all the countries that are partitioning Syria through war

“We had our hands up, our voices our only weapon to ask for greater rights, more democracy, more freedom, more reforms. Thousands of us gathered in Clock Square, in my city, Daraa, (in south-west Syria, ed.’s note), regardless of social, ethnic and religious affiliations, in what was perhaps the largest protest in our country’s recent history. We truly thought the time had come for a change in our lives, having been forced to endure a terrible dictatorship. Instead, we were attacked with weapons by the Armed Forces of the Regime.” The place that could have become the symbol of the Syrian Arab Spring, in just a few days became one of the martyred cities of the war in Syria, raging uninterruptedly since March 2011. “Since then, nothing returned the way it was before.” It is the sad story of Amjad’s (a fictitious name for safety reasons) broken dream. At the time he was just over 30 years old, one of the first to take to the streets of Daraa to march for freedom. He is still pursuing this dream after many years, despite having been forced to flee his country, hounded by the regime. 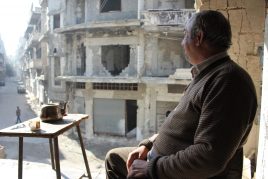 The story. “We took to the streets with a group of friends, and many people followed. I remember – he says in fluent Italian – that when the regime gave the order to open fire on the crowd, many soldiers refused and left the army to form the so-called Free Syrian Army. Their intention, we were told, was to defend the people and not to kill them. However, before long, weapons started to circulate among the protesters too. That’s was when we realised that other countries and radical Islamic affiliated militias, like Jabat al Nusra, were taking over our peaceful protest to plunge Syria into the abyss of war. Syria has become a battlefield for a proxy war fought by the regime and its allies Russia and Iran, against the rebel groups financed by Turkey and several Arab countries.” This foreign interference paved the way for the rise of ISIS between 2013 and 2014. “If Assad had listened to the voice of the people we would probably be telling a different story today. That was not the case and the consequences are there for everyone to see. Syria today is at the end of its tether, impoverished, divided and prey to the interests of other countries such as Russia, the US and Turkey, which are partitioning it.” The figures after 11 years of war are appalling: of the 22 million Syrians living in the country, more than half are internally displaced persons and refugees living in Lebanon, Jordan and Turkey. The six Syrian migrants found dead on a boat that reached the Sicilian port town of Pozzallo a few weeks ago were indeed arriving from Turkey. Another boat capsized off the Syrian coast on September 22. It had sailed towards Europe from the port of Miniyeh, near Tripoli, Lebanon, with 120 to 170 migrants and refugees on board, most of them Syrians, Lebanese and Palestinians. At least 80 of them died, including women and children. Yet another tragic chapter in a war that has been ignored – just as the cry for help of those migrants at the mercy of the sea.

The arrival in Italy. Amjad is the only one left of that group of friends: “sadly, the others are no longer with us. One was imprisoned and tortured to death,” he recalls, his voice breaking into tears. Also for that reason, shortly before the end of 2011 ( November 11), persuaded by his father, Amjad fled Syria, where he never returned. “I was considered an opponent of the regime and if I were to return I would be put to death”, he said bluntly. After a long ordeal that led him to search for a job across a number of European countries, Amjad arrived in Italy where he successfully obtained political refugee status. He was reunited with his wife and five children (aged 3, 7, 11, 17 and 20), who had meanwhile found refuge in Jordan, only in mid-August. After various bureaucratic vicissitudes, he finally embraced his youngest daughter for the first time at Bologna’s airport. He hadn’t seen her since she was born, “except on video calls” he says with a laugh. “The rest of my family, including a brother and a sister, stayed in Daraa. My father was twice imprisoned by the regime as a form of retaliation, he had to pay his torturers to leave. The same thing happened to one of my brothers. Now things seem to be getting a little better, also because it looks like Assad’s regime has become weaker, a pawn in Russia’s hands. “I left Syria long before the war to go and work in Dubai. I returned after several years, it was 2009″, he recalls. “I longed to live in my country, to contribute to its renewal, but they stopped us at gunpoint.” Amjad also mentions the other war that the Syrian population is fighting on a daily basis, the war against poverty: “my relatives living in Syria told me that they only have electricity and drinking water for a few hours a day. There are no jobs, no food, no health care available. International sanctions hit the poor people, not the rulers.” 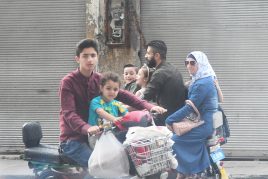 A new beginning. Amjad has been living in a village in the Lazio region since 2017. His family joined him there on August 14. Thanks to his amiable and kind disposition he made many new friends who are helping him with everything, including furnishing his home, because “now there are seven of us, it’s harder”, he says, with a smile. It is a silent and discreet show of solidarity marked by inclusion and integration. These are important days for Amjad: “first of all, I have to get my children’s documents translated to regularise their school and university registration.” “I am happy with my job as a construction worker,” he adds without trying to hide his secret dream: “to work as a mosaicist. I mosaic classes in Bologna”, he says, while proudly showing a photo of one of his artworks depicting the sun and the moon together, created with countless tiny coloured stones. “A beautiful mosaic , he concludes, just like my Syria was before the war, a place where everyone lived in harmony and peace, and with the same yearning for freedom.” A mosaic of many lives that Amjad hopes to see pieced together in the near future.