The final communiqué of the bishops of the Holy Land Coordination, on a solidarity visit to the local Christian communities (as of May 21), was released today in Jerusalem. Theme of the visit: "Jerusalem, locus of the soul – A mother who educates and makes us grow"

(From Jerusalem) “Jerusalem is a Jewish city, a Christian city, a Muslim city. It must remain a common patrimony and never become the exclusive monopoly of any one religion.” This was reiterated by the bishops of the Holy Land Coordination (HLC) in the final statement that concluded their annual solidarity visit to the Holy Land, whose title is drawn from Psalm 137:5, “‘If I forget you, O Jerusalem, let my right hand wither.” The choice of the Psalm by the ancient Jewish poet dwelling in exile, who with these words expressed his love for the Holy City – whose name recurs 656 times in the Bible – is certainly no coincidence, and it echoes the theme of this year’s visit ( May 21-26): ” Jerusalem, locus of the soul – A mother who educates us and makes us grow.” 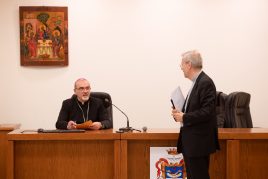 Talks and meetings. Five days of meetings with the local Christian communities of Jifna, Beit Hanina, Ramallah, Birzeit and Jerusalem, with the Latin Patriarch, Pierbattista Pizzaballa, with Father Dobromir Jasztal, vicar of the Custody of the Holy Land, with Msgr. Tomasz Grysa, deputy head of mission of the Apostolic Nunciature and with representatives of other Catholic institutions in the Holy City. Numerous issues were addressed in the meetings, also reflected in the final declaration. These include the role and importance of Christians in Jerusalem, their everyday challenges, the future of young people, the situation of asylum seekers and migrant workers, and the possibility (or utopian ideal) that the Holy City may one day become the Capital ” of two States”. The declaration was signed by Bishops Declan Lang, HLC President, Udo Bentz (Germany), Peter Bürcher (Nordic countries and Switzerland), Nicholas Hudson ( COMECE), Alan McGuckian (Ireland), and William Nolan (Scotland). 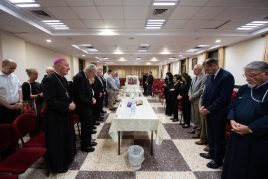 Presence of the Christian community threatened. Quoting Patriarch Pizzaballa’s message that “it is our right and duty as Christians to uphold the city’s openness and universality”, the HLC bishops recall that “the Christian community is essential to Jerusalem’s identity, both now and for the future.” Yet “its continued presence is threatened by occupation and injustice.”

“Many of those we encountered – reads the document – are facing violence and intimidation by settler groups, restrictions on their freedom of movement, or separation from their families because of the status they are assigned.”

The bishops likewise voice the “concerns” expressed by the Christian community during the meetings over “unilateral restrictions on freedom of worship during Easter, imposed by the Israeli police.” In their final Communiqué the bishops recall “the killing of Palestinian Catholic journalist” Shireen Abu Akleh and “the shameful attack on mourners at her funeral.” Criticalities highlighted in the text include denouncing the reality of “people of all backgrounds” who “are living in poverty”, which has been compounded by the pandemic.

Appeal to pilgrims. “The absence of pilgrims during the past two years – write the bishops – has devastated livelihoods, including among Jerusalem’s Christian community, leaving some families struggling to afford housing, food, or other essentials.” Nevertheless, “amid these challenges there are nevertheless signs of hope. We visited Christian organisations taking responsibility for the wellbeing of their community and wider society. They are working tirelessly to  alleviate hardship and improve lives. We met young people who, despite facing daily violations of their fundamental human rights, refuse to be the last generation of Christians in the city.” The declaration ends with an appeal to pilgrims to return to the Holy Land: “we call upon them to support Christians in Jerusalem and throughout the Holy Land.

It is essential that all pilgrims understand and engage with the reality of life for the Christian community here.

A true Holy Land pilgrimage should be a journey of faith, encounter, and solidarity. Pope Francis affirms the universal value of Jerusalem, which goes beyond any consideration of territorial issues. Inspired by Christ our Peace, all Christians must help preserve the city’s sacred character and promote an authentic vision for Jerusalem as a place of dialogue 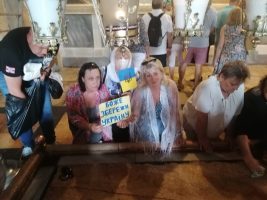 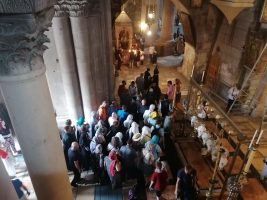 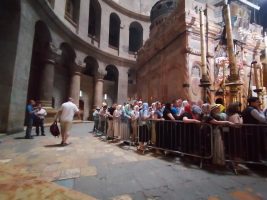 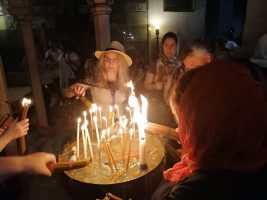 The Holy Land Coordination (HLC), made up of bishops from across Europe, North America and South Africa, was created at the end of the 20th century at the invitation of the Holy See. Its purpose is to visit and support the local Christian communities in the Holy Land. The primary mandate of the Coordination is expressed through the four Ps: Prayer, Pilgrimage, Pressure and Presence. This year’s visit took place in May and not in the traditional month of January due to the pandemic. The HLC 2023 annual visit will take place next January in Jordan.