After two years of suspension due to the pandemic, pilgrims are slowly but steadily returning to the Holy Land. Hotels, guest houses and shops are resuming their activities, offering respite to the local economy and reasons for hope to Palestinian Christian families who live off tourism and pilgrimages. Figures from the Israeli Ministry of Tourism and the Christian Information Centre ( CIC) of the Custody of the Holy Land show that over 5,500 Italian pilgrims have returned to the Holy Land since January

(From Jerusalem) The narrow streets of the Christian Quarter in the Old City of Jerusalem – the beating heart of Christianity – the Church of the Holy Sepulchre (the privileged destination for anyone making a pilgrimage to the Holy Land), are returning to fill up with visitors. After a two-year stop imposed by the Covid-19 pandemic, Israel has gradually relaxed restrictions to the point of lifting PCR testing mandate for those entering Israel at airports and subsequent isolation as of May 21, effectively restoring normal travel conditions. These decisions were taken in view of a slow but gradual increase in inbound tourism after the pandemic. Israel recorded 207,400 visitor arrivals in April 2022, (compared to 30,200 in April 2021 and 405,000 in April 2019). Of these, 5,000 tourists arrived from Italy in the month of April alone. These figures mark a significant increase compared to April 2021 and a 49% decrease compared to April 2019, a boom year in incoming tourist flow  to Israel. Should this trend continue, 2022 could record as many as 2 million visitors.

Respite for the economy. The Shrines of the Holy City, the Holy Sepulchre, Gethsemane, Bethphage and the Shrine of the Flagellation, among others, are seeing a steady but well-organised influx of pilgrims arriving mostly from South America, the United States and Central America, while pilgrims from Eastern Europe, traditionally numerous during and after the Orthodox Easter, are trailing behind. The Christian Information Centre (CIC) of the Custody of the Holy Land, which handles the booking of Holy Mass and prayers in the holy sites, points out that “the war in Ukraine has led to the annulment of numerous pilgrimages. It is difficult, if not impossible, to travel from that region.” There has also been great concern among pilgrims following a series of attacks, in the second half of March and in April, that claimed the lives of Israelis and Palestinians. However, the CIC reports, “the holy places are safe and pilgrims have nothing to fear.”

The revamped store windows have returned to their original display of sacred and devotional objects, and its owners encourage pilgrims passing by to purchase their items. “We are nowhere near pre-pandemic numbers,” says Mustapha, owner of a souvenir shop not far from the Holy Sepulchre, “but we are confident for the near future, although it will still take some time before we return to normal.” 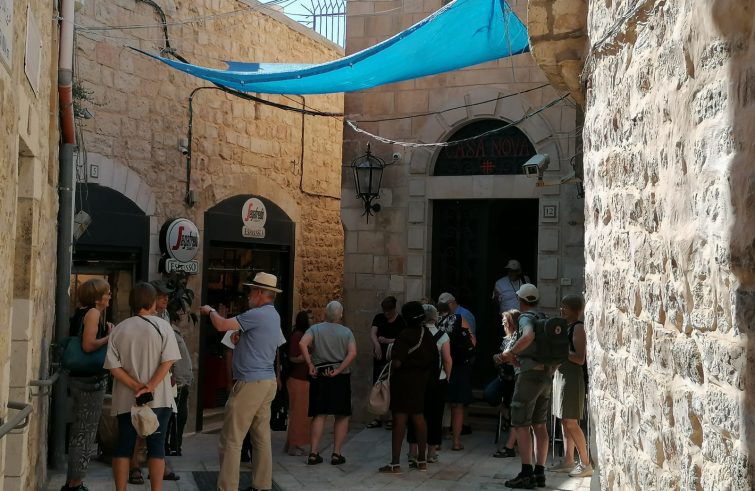 “Where are the Italians?”. This view is shared also by Father Ibrahim Faltas, Discreet of the Custody of the Holy Land, Director of Casanova Jerusalem, a pilgrim’s house a short distance from the Church of the Holy Sepulchre. The facility is a veritable home, especially for Italians. Casanova reopened about three months ago, after the pandemic. “The last group we hosted – the friar told SIR – was on March 16, 2020. Bookings so far are encouraging, but nowhere near pre-pandemic numbers. The war in Ukraine, the attacks in March and April, here and in the Territories, have weighed heavily, but we must be patient and wait for pilgrims to return to the Holy Sites.” Italians are still not coming, and Father Ibrahim says this with a smile. “Italians are still few. People are expecting them here and ask ‘where are the Italians?’ Italian pilgrims have historical ties with the Holy Land, they are friends of both Palestinians and Israelis, they are much appreciated. We hope they will return soon,” says the friar. He then extended his welcome to Cardinal Matteo Zuppi, archbishop of Bologna, newly appointed president of Italian bishops: “We are looking forward to seeing him in Jerusalem together with the Italian dioceses.”  Pilgrims flow in and out of Casanova’s door; two of them are Italian, Chiara and Andrea, they are in Jerusalem on their honeymoon. Casanova’s reception area is full of suitcases, keys to the rooms prepared at the front desk for 55 young people arriving from Umbria and Sardinia. The youths are accompanied by Umbria’s commissioner of the Holy Land, Father Stefano Tondelli: “We arrived today. Our pilgrims are young people in discernment and they trust that this pilgrimage will offer them the clarity they need to make the right decisions for their lives.” 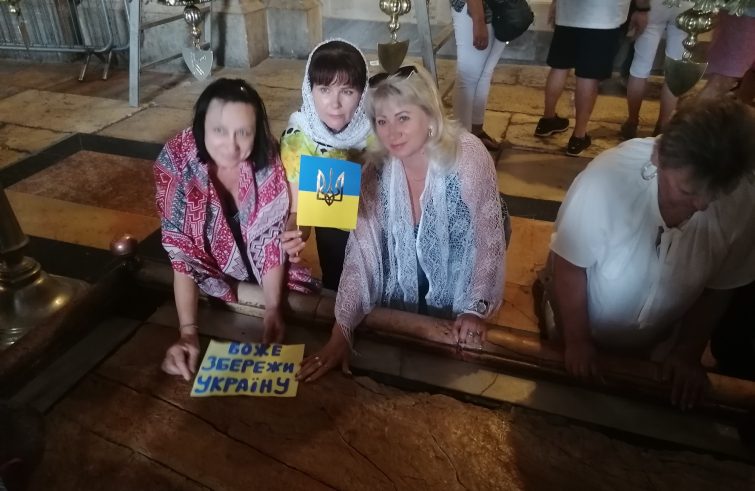 Inside the Basilica. In the meantime, several groups of pilgrims flocked to the square outside the Holy Sepulchre, among them also young Serbian football players of the Under-17 team who are participating in the 2021-22 European Under-17 Championship finals. There are also some French, Spanish and Brazilian pilgrims, each wearing earpieces, listening to the explanation offered by their respective tour guides. Inside the Basilica, a small group of Ukrainian women are praying at the Stone of Anointing. They display a Ukrainian flag and wave a small banner hailing their country. They are members of the Ukrainian diaspora. They say they came on pilgrimage to pray for peace and for their family members who remained in their homeland. Orderly rows of pilgrims line up at Calvary and for entry into the Holy Sepulchre. Everything happens in an orderly and quiet manner. Pre-pandemic crowds of pilgrims are a distant memory – at least for now. Nevertheless, “we are seeing a restart that brings confidence and hope to the many Palestinian Christian families whose livelihoods depend on religious tourism, and it gives respite to a struggling economy sorely tried by Covid-19.” 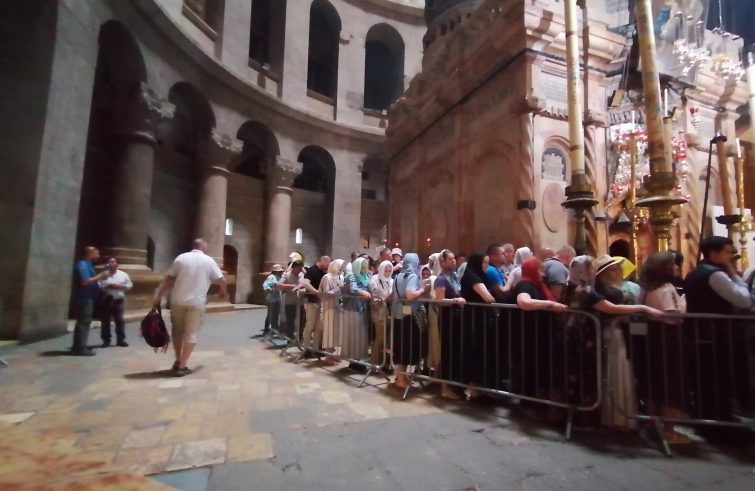 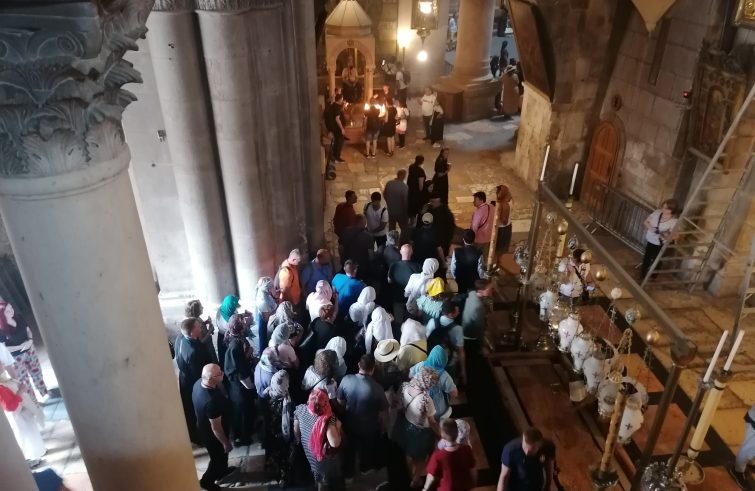 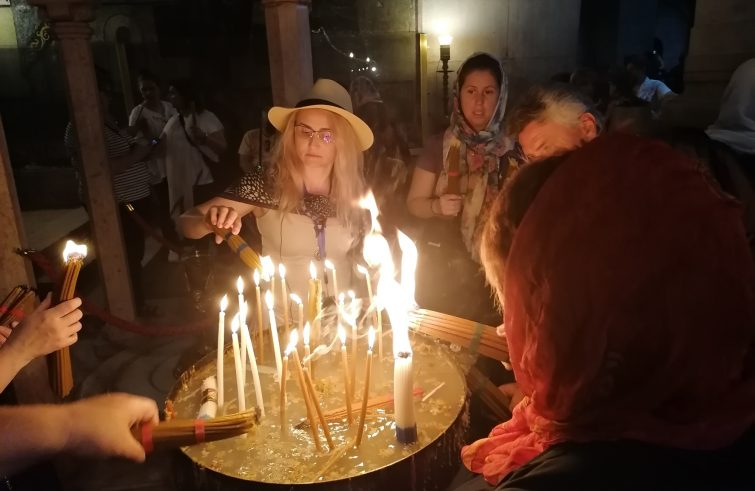