A "Christian narrative" on Jerusalem to reaffirm the Christian community's citizenship rights. It was reaffirmed by the Latin Patriarch of Jerusalem, Pierbattista Pizzaballa, in an interview with SIR on the sidelines of a meeting with the bishops of the Holy Land Coordination (HLC), in Jerusalem for their annual solidarity visit since Saturday May 21. The theme of the HLC 2022 is "Jerusalem, locus of the soul - A mother who educates us and makes us grow”

(from Jerusalem) A “Christian narrative” on Jerusalem to reaffirm the Christian community’s citizenship rights. It was reaffirmed by the Latin Patriarch of Jerusalem, Pierbattista Pizzaballa in an interview with SIR on the sidelines of a meeting on Tuesday with the bishops of the Holy Land Coordination (HLC) in Jerusalem. The HLC bishops opened their annual solidarity visit (postponed from January to May due to the pandemic) on the evening of Saturday, May 21. The HLC 2022 is themed “Jerusalem, locus of the soul – A mother who educates and makes us grow.” 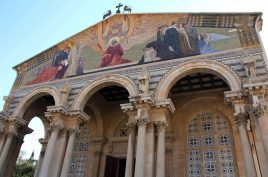 A new narrative. “Jerusalem – the Patriarch told SIR – is a sensitive issue here in the Holy Land. It is frequently at the centre of political debates. Conversely, the Christian narrative regarding the Holy City is less known. As Christians we have every right to speak about Jerusalem.” “It’s not a question of launching new crusades – he points out – but of understanding that Jerusalem is not a matter that concerns Israelis and Palestinians alone. Jerusalem is considered the capital of the three monotheistic religions, Christianity, Judaism and Islam, and it is closely connected with the identity of these three faiths. That is why it is important to refer to Jerusalem also from a Christian perspective, without precluding the Jewish and Islamic ones.” Compared to the latter two, “the Christian narrative appears the weakest” and indeed, this weakness can be found not so much in the numbers of Christians, a minority today, but in the fact that “a Christian should have a clear understanding of the importance of Jerusalem, but unfortunately that is not always the case.” In other words, there is an “identity which needs to grow stronger.” “If we only look at the numbers,” the Latin Patriarch points out, “it seems obvious that Christians, being a small minority, have nothing to say. 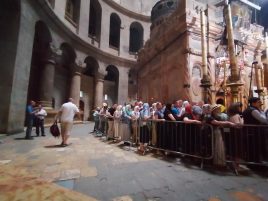 Jerusalem at the centre. But that is not always the case, “at least not in the Catholic world” recognises Pizzaballa, who cites the example of the “Orthodox world” where the notion of centrality “is very clear: Orthodox Christians don’t celebrate Easter without Jerusalem. Suffice it to recall the Holy Fire ritual (when on Holy Saturday, Orthodox pilgrims and faithful await the miraculous descent of Holy Fire from heaven to the Holy Sepulchre, ed.’s note). Obviously, the Catholic world is more Rome-centred. Every Christian church has its centre, but the heart that belongs to all is Jerusalem and in Jerusalem.” The question is not to be “Rome-centric” or ‘”Jerusalem-centric”, the Latin Patriarch remarked, “because

Jerusalem needs Peter, there can be no Church without Peter.

And Peter comes from Jerusalem. These two aspects must be always remembered. The Church is not only European, the Church is universal, and we must find a common and shared language for all. No one should argue over Jerusalem.”

Religious and political identity. There is also a political issue in both the Israeli and Palestinian narratives that needs to be addressed: “the issue of the land. But the subject of Jerusalem cannot be confined to the Israeli-Palestinian conflict. It is a well-known fact that here in the Holy Land, policies concerning Jerusalem are the expression of a religious vision and not the other way around. Jerusalem is not just about the borders between two States, Israel and Palestine. It is much more than that: it pertains to religious identity, whereby the three Abrahamic religions enjoy equal citizenship. Hence, for Pizzaballa, there is a need for “a Christian narrative on Jerusalem in addition to the Jewish and Islamic ones, underpinned by a systematic, detailed and unambiguous discourse grounded in the Holy Scriptures. “Christian language is often not understood by Jews and Muslims”, says the Patriarch. “Therefore, if we want to be citizens in Jerusalem, we must build its foundations on religious grounds without being caught up in emotions, devotions, intentions and fine phrases that are perhaps understood only by us but not by others. We must reaffirm that in Jerusalem we have our roots because this is where we were born.”