Father Massimo Fusarelli visited the Holy Land past October 20-25. It was the first 'official' visit since his appointment, on July 13 this year, as Minister General of the Friars Minor (OFM). “The purpose of my visit was to bring my prayers for the whole Order and for the start of my service, to Calvary, the Resurrection and other holy sites, Bethlehem and Nazareth." Fr. Fusarelli has travelled to the Holy Land at least 16 times, but this visit, he said, is "special.” He shared with SIR the details and the meaning of the visit: "Living in this Land not as strangers is the essence of being minority. To be brothers, to be minors in terms of being able to extend our gaze beyond ourselves and to experience this land from the perspective of Israelis, Palestinians, Jews, Muslims and Christians. This is the greatest challenge for us

“A visit to the friars and a pilgrimage. The purpose of my visit was to send a sign to the friars who live there, to our religious and ecclesial communities, as a pilgrim who returns to the places of Jesus. I went to say to everyone that we are present in faith and hope. With a special thought to Bethlehem’s Christians, those most affected by the shutdown imposed by Covid-19.” Fr Massimo Fusarelli, Minister General of the Order of Friars Minor, returned from the Holy Land on 24 October last. He spoke with SIR about his visit to the Custody of the Holy Land and the holy places. He spent “intense” days in Jerusalem, Bethlehem and Nazareth, praying in the locations where Christ walked. He met with the Latin Patriarch Pierbattista Pizzaballa, with representatives of the various Christian denominations, notably Greek Orthodox Patriarch Theophilus III, and gained a deeper understanding of “this beautiful but fragile reality that needs our help and closeness.” The occasion included the solemn entrance into the basilica of the Holy Sepulchre in Jerusalem, as provided for in the Status Quo, Holy Mass celebrated inside the Wayside Shrine, the procession along Bethlehem’s Star Street to the Grotto of the Nativity, and the final stop in Nazareth, the site of the Annunciation. 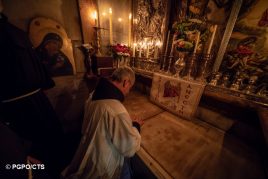 “is a journey we make together. But being a pilgrim in the Holy Land – he continues – also means to concretely help the Mother Church of Jerusalem. In fact, pilgrimage is the greatest form of support we can give to Christians in the Holy Land”.

“Such support does not end with the end of the journey but continues once we return home, when we are called upon to become sustainers of the Holy Land, promoting the Good Friday Collection, solidarity projects and initiatives. It gave me great joy – Father Fusarelli told us – to meet two small groups of pilgrims. I perceived them as important signs of closeness at such a difficult time.” However, there are indications that things are starting to change. After a year and a half’s suspension, the Israeli government has decided to open its borders from November 1, 2021, to pilgrims who are fully vaccinated or have recovered from Covid-19. Similarly, Bethlehem is preparing to welcome pilgrims anew as of November 6. The Minister General said he hopes that “reopening national borders to pilgrims will contribute to improving the living conditions of local Christian communities, which benefit from religious tourism as a source of income.”

Helping local Christians. There is a serious risk that Christians will leave the Holy Land, remarked the Franciscan Friar: “their population, about 150,000 today, is declining rapidly and this is a cause for concern.

The Holy Land risks becoming an open-air museum rather than home to a living Church.

These people are deeply rooted in their Land though a strong bond of faith – as opposed to a political or ethnic one. This small flock risks disappearing and must be helped to remain. Father Fusarelli praises “the living faith borne witness to by the great Christian community of Nazareth. It was beautiful. Regrettably – he adds – this is not always the case. In other parts of the Holy Land one notices how difficult the situation is. Here, the questions that surround our Christian faithful are those concerning an increasingly uncertain future, an unstable social and economic situation affected by the conflict between Israelis and Palestinians, and now by the pandemic.” In this situation the work carried out by the Custody of the Holy Land is essential: “We have 17 schools with a majority of Muslim pupils. A positive experience”, underlines the Minister General, “because in growing up together, the students develop a worldview based on mutual respect. In this regard I have noticed for myself that the Friars’ work with the families is extremely important. We are aware that we live in a land with strong polarisations, but we also know that large numbers of Palestinians and Israelis have great hopes for peace. And we are with them”. 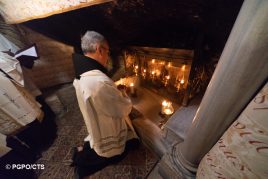 In the style of St Francis. The charism of the Franciscan Order, whose presence in the Holy Land dates back more than 800 years, points out Father Fusarelli, “is conducive to operating as brethren and ‘Minors’. Brothers of all, seeking opportunities for friendship and dialogue, without being possessive guardians of a presence and of locations.

Today, ‘Minor’ recalls a growing awareness of being in the minority.

We cannot live as strangers in this multicultural and multilingual society. It is necessary to learn languages, such as Arabic and Hebrew, to be fully integrated citizens. To be in this Earth not as foreigners is the nature of minority.

To be brothers, to be minors in terms of being able to extend our gaze beyond ourselves and to experience this land from the perspective of Israelis, Palestinians, Jews, Muslims and Christians. This is the greatest challenge for us.

St Francis calls us to be agents of reconciliation and peace by remaining close to the people. This is our vocation in the Holy Land and in all the places where the Custody is present, such as Syria and Lebanon, where I intend to go as soon as possible to support the friars and the communities they serve.”