A nation where fast-paced transformations are set against a background of long-standing tradition and poverty. The impact of COVID-19: few infections but closed schools. The story of Sr. Agnes Gangmei, from the congregation of Daughters of Mary Help of Christians, born in India, a missionary in the Asian country since 2012. "I preach with my life, through my interaction with the community, with children and adults.” Catholics number 1,300 in a area five times bigger than Italy

A small flock of 1,300 people. Catholics in Mongolia, a young Church in a country with a thousand-year-old history. “In spite of our efforts as missionaries working in schools, we are subject to limitations in our religious attire,” said Sister Agnes Gangmei (below, with some of her pupils), Daughter of Mary Help of Christians, born in India, carrying out her missionary service in Mongolia since 2012. “I preach with my life, through my interaction with the community, with children and adults. I bear witness to the Gospel through my activities, never losing hope, never losing joy. My purpose here is simply to prepare the ground and sow the seeds.” 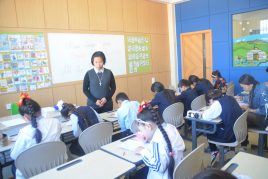 Human values, Christian roots. Sister Agnes lives in Orbit, on the outskirts of Ulan Bator, one of the poorest cities in the world, with a population of approximately 1.5 million, out of a total of 3.2 million people living in the rest of a country five times bigger than Italy. Vast and depopulated territories where the tundra of the Asian plateau blends with the Gobi desert and the forests of the Khogno Khan mountains. It is perhaps also because of the ”geographical distancing” inherent in Mongolia’s natural environment and history, ( with just two inhabitants per square kilometre) that the cases of COVID-19 in the past months remained low (slightly over 1 400 infected and two dead, according to official reports). However, this situation is also due to the lockdown imposed on many activities and schools last November.

“This year our ‘Don Bosco House’ school has less children owing to the COVID-19 pandemic”,

said Sister Agnes, who has been living with three missionaries (two from South Korea and one from Japan) for the past six years, all of them teachers for about 100 children in the kindergarten, 70 in the primary school, and 25 in after-school activity. The nuns wear civilian clothes in compliance with the law under which religious institutions are not allowed to run public schools. Mongolia, a country with a Buddhist majority, is a frontier territory where “missionaries are not free to teach or speak about religion except inside the church.  In schools, we are only allowed to impart human values, which for us have Christian roots.” 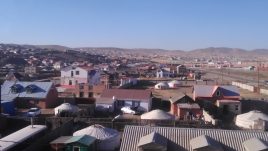 Suburbs and poverty. While activities continue at a slower pace owing to the risk of infection, pupils regularly attend the English language courses and, above all, the oratory. The school was opened after the apostolic prefect of the region (where the first missionaries arrived 29 years ago), Monsignor Wenceslao Padilla, invited the Salesian Sisters to carry out their education service in the suburban districts of the capital. According to Sister Agnes, “the dwellings on the outskirts of Ulan Bator” (photo) and “in the surrounding countryside were built illegally, most of them lack drinking water and appropriate sanitary facilities. People living in traditional ger, (nomadic tents made of wood and fabric), are exposed to the use of coal stoves for cooking, which can cause acute respiratory diseases, while the poor variety of foods causes malnutrition and stunted growth in children, as they eat mostly meat and dairy products.” The missionaries’ efforts reach out to families since “many children grow up in difficult conditions, in poverty, with only one parent or in most cases with their grandparents. Some of them don’t even know their mother or father.”

Rapid transformation. Today Christians (including Protestants) are a small minority in Mongolia, a young country with a glorious past of emperors and fearless warriors like the legendary Genghis Khan (1162-1227). Daily life and progress are conditioned by long distances and extremely cold temperatures that drop to -40 degrees Celsius from November to May. This makes it virtually impossible to survive in some areas. In the last few years many nomadic people have left the rural areas. Yet cattle breeding remains a major activity in this Asian country, while the industrial sector (22%) is linked to mining (copper, molybdenum, gold, tin, tungsten…) involving foreign companies – China, Russia, Korea and Canada.

The urban area is however marked by significant differences from the rest of the country. New technologies rapidly developed in the capital, changing society with the fast spread of cell phones and Internet use.

“Everything is changing rapidly today,” concluded Sister Agnes, “the country has undergone great transformations. We have yet to understand which human values and principles will accompany Mongolia into the future. An excessively fast development risks leaving behind important aspects of humanity.”