More than 400 faithful in Atlanta from the various parishes of the archdiocese marched peacefully and in prayer to protest against racial injustice and the sin of racism. For 8 minutes and 46 seconds they stood at the main city park in silent prayer to remember all the victims of the struggle for racial equality, wearing a white or black t-shirt as a sign of solidarity, with their faces covered by masks and keeping a safe distance

Another violent death. Another African-American killed by the police. More protests and shops set on fire. This time it occurred in Atlanta, the capital of Georgia, hometown of Martin Luther King. On Saturday, Rayshard Brooks was shot three times in the back by police officers. This young 27-year-old fell asleep in his car to recover from an additional glass of beer before driving home to celebrate his six-year-old daughter’s birthday. Rayshard never made it home because after an altercation with police officers who instead of assessing his state of health wanted to arrest him, he attempted a frantic escape and was killed. The policeman who shot him was fired, while the chief of police of the city resigned. Not even a month has passed since George Floyd’s death with more blood and bitter protests rocking cities across the United States.

“Cities and states are placing specific restrictions on law enforcement’s use of force and transferring public resources to invest in community solutions”, declared in a statement the American Civil Liberties Union, a nonprofit organization for the defence of individual liberties and rights, with over 300 reports filed every month. “Protesters, activists, politicians, youth, faith, business and community leaders must come together to bring about structural change. Atlanta must lead the way to reimagine public safety.” 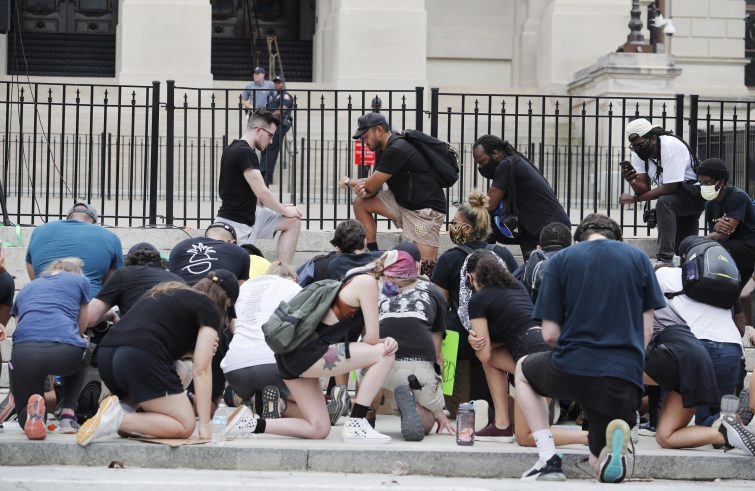 Last Thursday more than 400 faithful marched peacefully and in prayer across downtown Atlanta from the various parishes of the archdiocese to protest against racial injustice and the sin of racism. For 8 minutes and 46 seconds they stood at the main city park in silent prayer to remember all the victims of the struggle for racial equality, wearing a white or black t-shirt as a sign of solidarity, with their faces covered by masks and keeping a safe distance.

“The message is clear. We are uniting our voices with those of many others to spread awareness on the lives of marginalized people in our communities and our nation. We are asking for justice for the oppressed, as Jesus called us to do,” said Father Victor Galier, an organizer of the march, pastor at the St. Anthony of Padua African-American Catholic parish in the west end of Atlanta. “We are committed to proclaiming the Gospel and we are committed to being actively antiracist in our words and actions. During these troubled days without justice, we must raise our voices and work for transforming our nation,” reiterated the parish priest, calling for a reform in the police use of force , that only 24 hours later bore dramatic evidence of killing a father whose daughter was eagerly awaiting to celebrate her birthday.

“The march is only the beginning,” Archbishop Hartmayer said, addressing especially those who are sceptical and not enthusiastic about the initiative.

“Our African American families are suffering,” he continued, “we must listen to their voices. We must walk with them on this new journey. We march because there is need for a new conversion.”

All participants were encouraged to “listen, learn and act”, meeting people in the margins of society, listening to stories of racism and actively promoting justice. Movies and participation in movements seeking to end police brutality and work towards passing legislation against hate crime were also suggested.