Stop the funding of the Libyan coastguard and solve the complex situation of migrants in Libya. As for the increased migrant landings in Sicily, “the arrival of refugees in the summer season and in the midst of the Covid crisis could have been anticipated two months ago. Advance planning would have prevented erratic approaches." Interview with Father Camillo Ripamonti, from Centro Astalli Refugee Service

Three Sudanese migrants were shot dead by the Libyan coast guard during landing operations last night in Khums, east of Tripoli.  The refugees were intercepted at sea and brought back ashore to be redirected to the detention centres whence they sought to escape. It is the latest incident in yet another heated summer of landings, marked by routine controversies over migrants against the backdrop of an unresolved Covid-19 crisis. Moreover, some hundred migrants have fled – and subsequently tracked down – from the tent facility at Porto Empedocle (Sicily). Minister Luciana Lamorgese thus decided to send the army and identify a new quarantine ship. SIR broached the issue with Fr Camillo Ripamonti, Chairman of the Astalli Centre in Rome, the Jesuit service for asylum seekers and refugees. 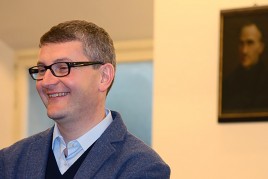 Three migrants were shot dead after being intercepted by the Libyan coast guard. What’s your reaction?

This tragic event shows that Libya is not a safe haven. Bringing people back to an unstable situation may also lead to death.

The continued funding of the Libyan Coast Guard prevents us from verifying whether their activity complies with human rights.

The solutions taken in the past did not prioritize people but national interests, those of the European Union as opposed to saving human lives.

But Parliament has once again approved the refinancing and renewal of the migration deal between Italy and Libya.

The decision to reinstate or use Libya as Europe’s external border, as is Turkey for the Syrians, violates individual rights. We have been requesting the evacuation of Libyan detention centres together with many other associations for a long time now, along with alternative and safe routes, such as humanitarian corridors, to free these people from human traffickers.

Yet Europe’s refusal to welcome them is a self-evident truth. The recent landings and the migrants who fled quarantine in Sicily are fuelling the controversy.

The instrumental use of the migratory phenomenon for political purposes is not helping its management, which should be a standard, programmed process. The arrival of migrants during the summer months and in the midst of the Covid crisis was foreseeable already two months ago. Advance planning would have prevented erratic approaches. Cramming hundreds of people together in tent facilities during the Covid pandemic is not an ideal solution either.

Is the quarantine ship a solution?

can be a temporary measure in certain situations, but it should not be the only solution.

Everything had to be planned in advance, but the emergency mode still prevails. I understand that it may be difficult when so many people arrive all at once, but if the purpose of quarantine is to protect people and communities’ health, they could have been distributed in small groups throughout the region, thereby simplifying monitoring activities.

During the lockdown, migrants were off the agenda of the press for months, although the landings continued. Now that we have regained some peace of mind, are we seeing a resumption of the same old invasion narrative?

In the last few years, migrants became the scapegoat for electoral consensus, to shift political agendas and disseminate fear. Now that we are no longer at the peak of the epidemic and minor outbreaks arrive from abroad, the migrant person has become the disease carrier par excellence, and is being exploited to this end.

Independent boats and dinghies are landing in Lampedusa from Tunisia. Some people who looked like tourists disembarked from one of them, including a poodle. What does it suggest?

It suggests that the migratory phenomenon is widespread and does not follow the same route to Europe, as we have seen in the past. The modalities change according to the chances of achieving the desired objective of reaching our continent, which despite the difficulties remains, in the imagination of the most disadvantaged populations, the ideal destination for a happier life.

Yet the only way of ensuring access into Italy is to apply for some form of international protection.

Our immigration law dates back to the year 2000 but the migratory phenomenon has dramatically changed in the last 5 years. To continue applying a law that no longer corresponds to the situation in our country is not helpful in terms of management and risks having negative repercussions at local level.

If we no longer have a quota of non-EU citizens allowed to enter the country to work or alternatives to irregular migration, we risk seriously harming the social fabric, as undocumented immigrants are  exploited as illegal agricultural workers. We need a new migration policy since the phenomenon has changed but the States are still unaware of it. In fact, the Global Compact for Migration calls on the States to adopt a global perspective.

The army in Sicily to guard the migrant centres. What is your view?

Estimates suggest 12,000 arrivals, three times as many as last year, but when compared to previous years the figures are very low.

sending the army can protect and reassure public opinion – let us remember, however, that the army was also summoned to monitor nightlife and related Covid-19 measures – but it also supports the idea that we need it and that we are being invaded. In contrast, the numbers are much lower compared to the past and could be managed in an orderly and planned manner. As things stand, there is a risk of fuelling fear.