On the occasion of the meeting of Bishops and Mayors of the Mediterranean region to be held in Florence on February 23-27, SIR interviewed the new Archbishop of Sarajevo, Mgr Tomo Vukšić, an invited guest at the event. Bosnia and Herzegovina, with its capital Sarajevo, referred to as the Jerusalem of Europe, symbolises the long tradition of coexistence

“To restore relationships that have been broken, to rebuild cities destroyed by violence, to make a garden flourish in what is now a desert, to instil hope in the hopeless, and to encourage those caught up in themselves not to fear their brothers or sisters. And to look upon this [sea], which has already become a cemetery, as a place of future resurrection for the entire area.” The meeting “Mediterranean: frontier of peace”, which saw the bishops of nineteen countries bordering on the Mare Nostrum convene in Bari from 19 to 23 February 2020, ended with that message, conveyed by Pope Francis in his address. The event resumes in Florence after two years, again on the initiative of the Italian Bishops’ Conference, but this time the bishops will be joined by the mayors of the cities overlooking the Mediterranean, increasingly afflicted by conflicts and tensions. On a number of occasions, Pope Francis denounced  a “piecemeal” Third World War, and the fact that the Florence meeting was inspired by Giorgio La Pira’s prophetic “Mediterranean Colloquies”, which envisioned the great sea as “a universe of nations illuminated by Christ and the Church”, is thus especially meaningful.

Also attending will be Msgr. Tomo Vukšić, recently appointed Archbishop of Sarajevo in Bosnia and Herzegovina. Card. Vinko Puljic, Archbishop Emeritus of the Bosnian capital, has often remarked that Sarajevo “is the Jerusalem of Europe. This city is a symbol and a martyr of a fratricidal war that claimed the lives of more than eleven thousand people and that today stands as a paradigm of coexistence among peoples for Europe”, and as a meeting point between the East and the West.

“Every encounter is important because each is a sign of the onset of mutual understanding, friendship and brotherhood,” Msgr. Vukšić told SIR. “However, the encounter between ethnic groups, faiths and cultures can also result in conflicts, as has occurred in the Balkans for thirty years. Therefore, for this encounter to be fruitful, it is necessary to practise the virtue of prudence and have a realistic approach. The city of Sarajevo, like the whole of Bosnia and Herzegovina, has suffered the experience of encounter turned into confrontation, and its 30-year-old wounds are still open.”

Your Excellency, your country is experiencing increasing tensions, caused by a constitutional crisis that casts an uncertain political future, with elections scheduled for next fall…

In the run-up to the elections, policymakers are working to reform the Constitution and electoral legislation. The international community, the US and the EU in particular, are closely monitoring the situation. Despite the numerous meetings, no agreement or consensus has been reached. It should be remembered that our legal system has not been completed yet. Many problematic laws have legal loopholes while others could be described as unfair. Many faults of the past have not been redressed. One such example is the question of properties nationalised under the Communist regime which have not yet been returned and there is no law regulating denationalisation. Political manipulation to gain positions of power is rampant in many parts of the country. On top of this, we face social injustice, past and present corruption, joblessness that drives emigration and impoverishment, especially among the young. The wounds of war are still bleeding and hurting. Nevertheless, we are confident in the attempts at dialogue between the international community and local politicians. We hope that fair solutions will be found for all.

You mentioned the war: next March 1 marks 30 years since the outbreak of the Balkan conflict in 1992. How do your people remember this conflict that claimed thousands of lives?

It caused tremendous suffering for everyone, and the wounds inflicted on those who lost family, friends, relatives and everything they had, are hard to heal. Some wounds may seem incurable, but every effort must be made to offer these people psychological and spiritual support.

Forgiveness has a strong healing power that liberates the soul.

Forgiveness should go hand in hand with legal and social justice. Promoting forgiveness and reconciliation is the mission of the Church at all times. 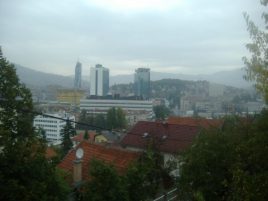 To what extent does religious or ethnic affiliation play a role in this reconciliation process?

In my view it’s more a question of political allegiances than of ethnic or religious affiliations, along with the absence of guaranteed rights for the various ethnic groups, such as employment. It should be remembered that Christians, Catholics and Muslims have lived together for centuries – here in Sarajevo it is common to find a church, a synagogue and a mosque located close to one another – and many towns and villages frequently had a mixed population. After the war, several areas became mono-religious and mono-ethnic, and enclaves were created that discourage coexistence.

What will be your contribution to the Florence meeting?

I would like to offer a testimony of dialogue and a reminder that dialogue and encounter require a certain amount of prudence. We must not be naïve. Dialogue is not understood by everyone in the same way. Perceptions in the Orthodox world or in the Islamic world are different from those that we might have as Catholics. When speaking of human rights, not always do we share the same perspective, and dialogue cannot be separated from the recognition of human rights and citizenship.

Openness and dialogue must always be promoted, whatever the cost, but we must never lose sight of the virtue of prudence, along with sound realism. Dialogue is the only way for the Mediterranean region to resume its role as a place of encounter, unity and development.