A summer vocational training camp for young people aged 16 and over will be held in the Vorzel seminary from August 15 to 21. Its premises were destroyed and looted in April, amid heavy fighting on the outskirts of Kyiv. The battered towns of Bucha, Irpin, Borodjanka are just a few kilometres away. "We don't know yet how many will arrive," says the rector of the seminary, Father Ruslan Mykhalkiv: "It's not important. What is important is to change the atmosphere, to have time for oneself, to listen to the Lord”

It was early April when the Vorzel Higher Seminary was looted. It is located on the outskirts of Kyiv, a few kilometres from the war-torn towns of Bucha, Irpin, Borodjanka. During those days of heavy fighting in the area, some people entered the seminary, smashed the entrance gate and stole everything. The photographs of the statue of the Blessed Virgin Mary smashed to the ground, the shattered windows and mortar shells on the walls, hit the headlines worldwide. They symbolized and showed that war stops at nothing, including places of worship and prayer. Five months have passed, and the seminary has not only reopened, thanks to donations made by countless contributors, it will also be hosting a summer vocational training camp for young people aged 16 and over from August 15 to 21.  “We don’t know how many will arrive,” says the Rector of the seminary, Father Ruslan Mykhalkiv. “It’s not important. What is important is to change the atmosphere, to have time for oneself, to listen to the Lord.” The young participants are asked to bring “the Holy Scriptures, a notebook with a pen, a change of clothes and 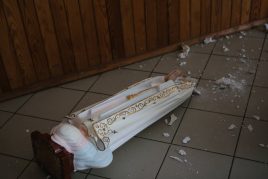 their good spirits.” The program features moments of religious guidance along with recreational and playful activities. Participants will visit Bucha, Irpin, Borodjanka, to see for themselves the scars inflicted by the war, because, according to the Rector, “spirituality” is not something to retreat to, but a place “where children can find answers to their questions and to all the evil they experienced.” The key phrase chosen by the priests for this year’s initiative is ‘in spite of’: “in spite of everything that is happening, in spite of the war that has deeply complicated and shattered our lives. In spite of – Father Ruslan explains – means that we want to remain faithful to life, cherish our future, look ahead. It means that despite the situation and the toll of the war, we continue as we always have.”

How are the young people in Ukraine faring?

Despite the madness of this situation and the injustice crying out to the heavens, the dynamics we are seeing are profoundly Christian and humane.

One such example is people’s zeal to help others, to assist those forced to leave their homes, especially from the east of the country. There is not just gunfire and fighting, there are also communities that have opened their doors to offer hospitality. The war has made people rediscover the importance of their fellow others, the generosity of a population. Young people need role models, someone they can look up to. And there are many today in Ukraine.

I am thinking of the army, the volunteers, the doctors, even the priests. Some people drive trains, buses and vans to help people evacuate and travel from one town to the next. There are people distributing bread and humanitarian supplies in relief centres. There is always someone in the background helping out.

Will schools reopen in September?

This is a very sensitive issue. Missiles are fired at us constantly. And schools lack adequate security to ensure students’ safety. They are not suitable places for young people and children to take shelter in case of an air raid. Yet staying home is equally detrimental. We have seen this in the two-year lockdown. Remote schooling deprives students of much needed human contact. However, resuming in-person classes is too risky now.

Our enemy acts like a terrorist organisation. It doesn’t even spare schools.

Have many young people left the country or have they remained?

Many have stayed. And many of those who had left have returned. It depends on the area from which they fled. Reportedly, there could be a new wave of people fleeing from the eastern parts of the country affected by the war October-November next. Up to now, they have remained with the hope of holding out, but the winters here are very cold and people will be forced to leave their homes.

Do you feel that the war is also stealing children’s future?

I do, also because so many universities, schools, kindergartens have been destroyed. There are many children whose parents are fighting with the military and many of them have never returned. They disappeared. Forcibly displaced to Russia or Belarus. This situation does not affect everyone but many people are deeply affected by it. On top of that, there are air raid sirens. Their sound now forms the backdrop to our lives.

We have grown used to it, but when we receive news of missiles fired at houses, we realise that it’s for real, that we are at war, that we can never feel safe.

When the Vorzel seminary was bombed, the bishop of Kyiv, Msgr Vitalii Kryvytsky, said it was important to reopen it for the good of the Church and the country because Ukraine, due to be rebuilt after the war, will also need spiritual guidance – priests. What should be the features of the of post-war ‘reconstruction’ priest?

I believe that person will have to be someone who knows the meaning of love and the meaning of suffering, someone who experienced both situations and therefore knows that love is stronger, even stronger than death itself. He will also have to be a person who knows how to keep his distance from the evil caused by war because it is all-consuming from within, it penetrates the soul and unleashes feelings of hatred against forms of injustice sustained for no reason. He must therefore be a person who is capable of holding on to hope, of cherishing forgiveness in his heart, of keeping at bay the toxic poison of death. War is a burdening circumstance, but it has confronted us with what is truly worthwhile. The priest will have to be capable of accompanying people on this journey.

I know at least three mothers who have no knowledge of the whereabouts of their sons serving in the Ukrainian army. They were brought to Russia but they don’t know where. How can they forgive? Maybe there are no answers, but there is a path that must be pursued together.