European Semester recommendations presented at the European Commission headquarters. EU economy hit hard by the war in Ukraine. Dombrovskis: "People have valid concerns about their rising living costs and ability to pay higher energy bills."  “Coordinated responses are needed". Gentiloni on Italy: "no intention to overtax”

“I would like to underline two key messages. First, we are far from economic normality. Second, we are not proposing a return to unlimited spending”. In his presentation of the European Semester recommendations to Member States (economic policy coordination cycle), European Commissioner for Economy Paolo Gentiloni, together with his colleague Valdis Dombrovskis, highlighted a number of key aspects, including steady “growth, albeit subdued”, recession risks confirmed, and the need to strengthen the economies also thanks to investments favoured by the NRP.

Italy: land register, taxes, pact. In response to questions from journalists during a press conference in Brussels, Gentiloni said with regard to Italy : “Our recommendations contain six words that I can also quote from the text: align the cadastral values to current market values. I think that this is neither a request to increase taxes nor to reintroduce taxes on the first home. If anything, it represents a necessity which I believe the Italian government is aware of, and is in fact in the process of developing measures to that effect.” He went on to say that “the European Commission has no intention of overtaxing taxpayers” – a statement which was seen as a response to Matteo Salvini’s recent objections. The Commissioner then pointed out that “the general escape clause” that suspends the rules of the Stability and Growth Pact also through 2023, will help Member States put in place “more targeted measures to mitigate the impact of the energy crisis and offer assistance to those fleeing war.” 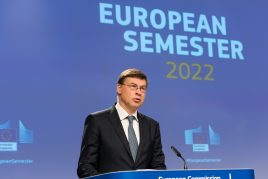 The burden of the war. For his part, in his presentation of the European Semester recommendations, the Vice-President of the Commission Valdis Dombrovskis, said: “Russia’s brutal invasion of Ukraine continues to shock the world. Europe’s geopolitical and economic landscape has changed dramatically. This aggression is pressuring supply chains and driving inflation higher. It has created enormous uncertainty. People have valid concerns about their rising living costs and ability to pay higher energy bills.” The EU economy “has been hit hard”, the Vice-President emphasised. “Still, we had a good starting point. Let us recall that before February 24, the EU economy was on a strong growth path. All signs were pointing to a good recovery from the COVID-19 crisis, following our massive, coordinated response to support people and businesses to get through the economic hardship of various lockdowns.” “The Recovery and Resilience Facility is helping too. Its implementation is progressing fast. We have now paid out around €100 billion to Member States so they can carry out their reforms and investments.”

Coordinating interventions. “Overall, the EU economy is proving resilient, despite the ramifications and risks brought by Russia’s invasion of Ukraine”, Dombrovskis remarked.

The Commission therefore “expects growth in 2022 and 2023”, but it will be a lot more subdued that previously expected.

“From the economic perspective, this is a critical time when it is paramount for the EU to coordinate policies effectively. Our compass for doing so is the European Semester. It will help us to address these current challenges, prepare to face new ones and weather this storm.”

Italy – excessive imbalances. “We must stay on track in equipping our economies for the future – by making them more resilient, and by making the green and digital transitions happen”, Valdis Dombrovskis pointed out. “One key lesson we have learned from this war is that we urgently need to end the EU’s reliance on Russian fossil fuels. Our response is the REPowerEU plan”, presented last week by President Von der Leyen.

“It will diversify the EU’s energy mix, moving away from Russian natural gas. It will help to accelerate the substitution of fossil fuels with renewable energy.”

The Commissioner thus addressed economic imbalances which, he said, “are gradually falling back. Private and public debt levels are declining from high levels. Current accounts are rebalancing. But the impact of COVID-19 is not yet fully absorbed. And new risks are increasing.” Finally: “Greece, Italy, and Cyprus continue to experience excessive imbalances. Germany, Spain, France, the Netherlands, Portugal, Romania and Sweden continue to experience imbalances. I am pleased to announce that Ireland and Croatia are no longer experiencing imbalances.” Italy’s weaker GDP growth is also a concern.

What is the European Semester? The European Semester is “a cycle of economic, fiscal, labour and social policy coordination within the EU. It is part of the European Union’s economic governance framework. Its focus – reads the website of the European Council – is on the 6-month period from the beginning of each year”, hence its name – the ‘semester’. During this period the Member States align their budgetary and economic policies with the rules agreed at EU level.” Following the proclamation of the European Pillar of Social Rights in Goteborg in 2017, “the European Semester also provides a framework for coordinating and monitoring member states’ efforts in delivering on the principles and rights set out by the pillar.”