Msgr. Pezzi, archbishop of Moscow, president of the Russian bishops, comments to SIR on Pope Francis' desire to travel to Moscow to meet President Putin, as he revealed today in an interview with Italian daily Corriere della Sera: "While we are perfectly aware of the fact that over the years it has been consistently maintained that the necessary conditions were not in place, the situation in Ukraine has radically altered the rules"

“I read the news and I must say that it surprised me too. It surprised me in a positive way and in line with Pope Francis’ tradition of surprising and astonishing us.” Monsignor Paolo Pezzi, Archbishop of Moscow, President of the Catholic Bishops of the Russian Federation, thus comments on the news regarding Pope Francis’ wish to travel to Moscow to meet President Putin. “I am a priest, what else can I do?” the Pope said in an interview with Italian newspaper Corriere della Sera on Tuesday. “I do as much as I can. If Putin would just open his doors.” 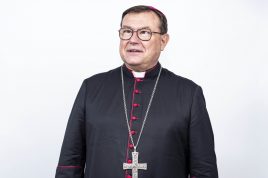 Your Excellency, do you think it is likely that the Pope will travel to Moscow? In your opinion, could President Putin agree to meet the Holy Father?

In principle, it is possible that the Pope will visit Moscow. While we are perfectly aware of the fact that over the years it has been consistently maintained that the necessary conditions were not in place, the situation that has arisen in Ukraine – and notably between Russia and Ukraine – has radically altered the rules. It’s hard to say whether the Russian president will accept this proposal. However, I think that the idea of the meeting is viewed positively by the president. But I don’t know – and it’s indeed hard to say – whether the President will travel to Rome. Instead, he might be willing to meet the Pope here in Russia.

In the above-mentioned interview, the Pope says he had a 40-minute conversation via Zoom with the Patriarch of Moscow and that he had a very open dialogue with him on the subject of peace. What message does this send? Has the Pope not stopped believing in Kirill?

I don’t think that the relations between the Pope and the Patriarch were ever interrupted. That is my impression. There may well be differing opinions. However, I do believe that the various attempts that have been made – not only the Zoom conversation, but also the exchange of correspondence – signal ongoing relations. It should be remembered that the Pope attaches great importance to the belief that our fellow other is never an enemy, never an antagonist, but always a brother. Even if our brother or sister refuses to meet us or has a different opinion. For the Pope, the other person is always a gift.

Do you envisage the possibility of joint action for peace?

I believe that a joint action for peace is first of all the explicit hope expressed by Pope Francis. Apart from that, I think it is important to remember the words of Jesus at Easter. Christ is the Giver of peace. We cannot be peacemakers unless we recognise before everything else the peace that only Christ gives and that he alone can give.