The European Catholic Social Days ended today in Bratislava. Delegates from the various Bishops' Conferences of Europe, along with experts in politics, economics and social media, exchanged views on the challenges posed by demographic, technological, digital and ecological transition during the three-day meeting. The event inevitably touched on the war in Ukraine. “May our Christian charity give us the strength to speak words of peace to an often divided Europe”, said Msgr. Archbishop Gintaras Grušas, CCEE President

To be a Church in Europe that serves, which does not seek answers but embarks on a journey together with others and which has the strength to make daily gestures of peace, amidst the challenges faced by the European continent today. These were the highlights of the European Catholic Social Days that ended in Bratislava on Sunday. Delegates from the various Bishops’ Conferences in Europe, along with experts in politics, economics and social media, exchanged views on the three main transitions characterising life in Europe in these times of post-pandemic: namely, demographic, technological and digital, and ecological transition. The third Catholic Social Days, titled “Europe beyond the pandemic: a new beginning”, promoted by the Commission of the Bishops’ Conferences of the European Union (COMECE), the Council of European Bishops’ Conferences (CCEE) and the Slovakian Bishops’ Conference, in collaboration with the Dicastery for Promoting Integral Human Development, inevitably touched on the bloody war in Ukraine.

A conflict that here in Bratislava resonated as a further impetus to reconnect Europe with its deep-rooted identity and history, and rekindle the dreams that inspired the founding fathers. Indeed, as Robert Schuman said, “a living Europe” “is indispensable to the maintenance of peaceful relations.”

“We had a lot of information, we had a lot of statistics and figures, which are necessary in order to do a good reflection”, said Cardinal Jean-Claude Hollerich, Archbishop of Luxembourg, President of the Commission of the Bishops’ Conference of the EU (COMECE). “However, we never forgot that at the centre always is the single human person, this person created by God, this person for whom Christ died on the cross and we are sent to love and to serve. We have reached some answers, we are more conscious about what we are called do. If we have not found ‘the’ answers, it is perhaps because it is not possible to find them here and now. However, we have walked together, we have been in a real process of sinodality, and it is by continuing to walk together that we shall see where the spirit of God is leading us, how it wants us to be a Church in Europe to serve.” “We could sometimes feel that there are some small differences between Eastern and Western Europe”, noted Cardinal Hollerich, “but these differences never became a wall. On the contrary, they inspired us to be better listeners, to become people of dialogue. We are not alone on the way as Catholic Church. We walk and work together with other Christians, and

Europe also needs a common testimony of all the people taking the Gospel seriously without levelling the differences that exist between us. I think we are on a good path, and we will continue to walk on that path, to serve God’s humanity, to serve the world that God created.”

In his conclusions, Msgr. Gintaras Grušas, archbishop of Vilnius, President of the CCEE, spoke about the pandemic emergency and the war in Ukraine. He noted how “these experiences spur us on to renew our commitment and our Christian witness, all the while remembering the words of St John Paul II, when he said that the difficulties and distortions of the times we live in call for a greater and clearer witness of Christian life.” “We cannot simply adopt other people’s agendas, become just another NGO working for family, economic and digital equality or a self-sustaining environment”, added Msgr. Grušas. “We cannot let ourselves become merely an instrument of governmental programs seeking to accomplish albeit virtuous goals.” “The problems that we face at a merely human level may attempt to steal our hope.” “It is from this perspective that we must work for justice, peace, solidarity and fraternity with our brothers and sisters in the family of humanity.” “May our Christian charity, especially at this time when our efforts are directed towards welcoming our Ukrainian brothers and sisters fleeing war and destruction and supporting those who remain in their homeland with the anguish of imminent danger,

give us the strength to speak words of peace to an often divided Europe, and to make many daily gestures of peace so that in the effort to understand others we may exercise the Christian commitment to forgive those who attack and offend.” 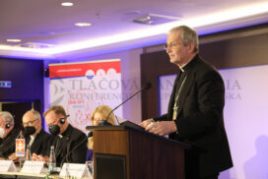 “We have had intense days of listening to facts, suggestions and opinions from different countries and different areas of expertise”, said Msgr. Stanislav Zvolenský, Archbishop of Bratislava, President of the Slovak Bishops’ Conference. “The great of amount of new information has broadened our perspective and opened up the opportunity for new ways of thinking.” “This event allowed us to see the challenges and problems we all face in a new, much broader context.”