"They are not just migrants and refugees. They are persons used instrumentally by a governing regime. Trafficked for political purposes and used as human shields for political gains, and to destabilise the situation at the EU borders. This type of activity is known as a hybrid attack, because it uses non-traditional weapons (trafficking in persons, disinformation and other means) to orchestrate attacks on the integrity of other countries' borders." Archbishop Gintaras Linas Grušas of Vilnius, new president of the Council of European Bishops' Conferences, denounced the ongoing crisis at the Belarusian-Polish border, where thousands of migrants are gathered. "It is a new form of human trafficking," he added, exploited "not for personal financial advantage, but for political gains in an attempt to perpetuate an authoritarian regime."

“We are deeply saddened by the images and the hardships these people are enduring. Families with children are stranded at the border. However, it is also very important to understand what these images represent. These are not simply migrants and refugees. They are people who are being instrumentally used by a governing regime.” Monsignor Gintaras Linas Grušas, archbishop of Vilnius and new President of the Council of European Bishops’ Conferences, does not mince his words to describe and denounce the crisis at the Belarusian-Polish border, where some 4,000 migrants – most of whom have fled Syria and Iraq – are gathered in camps near Kuznica. He adds: ‘They are trafficked for political purposes and used as human shields for political gain and to destabilise the situation at the EU border.

This aforementioned operation is known as a hybrid attack, because it uses non-traditional weapons (trafficking in persons, disinformation and other means) to target the integrity of other countries’ borders.” 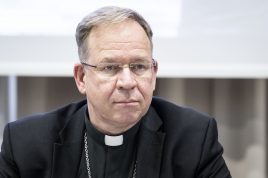 Who are the people along this route to Europe?

I have spoken to some of the refugees. Many are fleeing horrible situations in their home countries. Many have witnessed the horrors of war, even their family members killed before their own eyes. Some are fleeing religious persecution. Others are in search of a brighter future. There are also students from African countries who were offered the opportunity to study in Belarus. When the Lukashenko regime decided to undertake this step in order to create a border crisis with the European Union, it caused a price increase in dorms for these foreign students to such an extent that they could no longer afford to pay the rent. Thereupon, they were granted the option of returning to their home countries or “going to the EU”.

When faced with that choice, they normally choose to leave for the EU, not realising that they are being placed in a difficult situation. In fact, government officers bring them to the border and let them through. Those caught trying to cross the border illegally are sent back, but they are not allowed to return to Minsk or anywhere else. They are detained at the border by armed Belarusian officers who use dogs to prevent people from escaping to safety. Furthermore, the Belarusian government is arranging flights to Minsk with the promise of an entry opportunity to the European Union.

Many people, not realising that they are being manipulated, accept the offer in the hope of a brighter future.

Why are they targeting migrants?

This is a new form of trafficking in persons, which is an internationally recognised crime, but in this case the goal is not personal financial profit, but political gain in order to perpetuate an authoritarian regime.

Would you like to launch an appeal to political leaders?

In order to understand the scope for launching an appeal to political leaders, one must remember the situation in Belarus. There are many innocent people being tortured, persecuted and imprisoned in Belarus. This is happening on the borders of Europe and to people fighting for Western values and freedoms.

The Lukashenko regime has taken its own population hostage and is now using refugees as hostages and human shields.

Caritas and other humanitarian organisations in Lithuania are actively cooperating with the government not only in providing assistance to persons who have crossed the border and are housed in migrant centres, but also to deliver aid packages to those stranded at the border.

What is the best way to address this problem?

First of all, it is of the utmost importance to provide assistance to migrant people. Fundraising efforts have been made in Lithuania to help migrants both through parishes and directly by Caritas. However, the situation is far more complex than a migratory or refugee issue, and it requires international political community intervention to put an end to this non-conventional military action and this form of illegal human trafficking for political gain. The time for mercy is now.

Christian solidarity with those in need is of the utmost importance in order to help people stuck in migration centres and at the border, but also and more importantly to help those caught in the snare of this new form of trafficking in human beings.