"While it is only right not to discriminate against couples on the basis of their sexual orientation, to align same-sex couples with children with opposite-sex parents would be problematic, given that the element that distinguishes them - the existence of a biological bond between the child and the third party who made procreation possible - marks a fundamental difference between the two legal situations", remarked Italian jurist Alberto Gambino with regard to the resolution adopted by the European Parliament on September 13

In a nutshell, the European Parliament’s resolution on the rights of LGBTQI persons in EU Member States, adopted in plenary session in Strasbourg on September 13 with 387 votes in favour, 161 against and 123 abstentions, provides for the recognition of same-sex marriages and for the recognition of the adults listed in a child’s birth certificate, including LGBTIQ couples, as their legal parents in all Member States.

The resolution states that “marriages or registered partnerships formed in one Member State should be recognised in all of them in a uniform way, and same-sex spouses and partners should be treated the same as their opposite-sex counterparts.” It calls on all EU Member States to “recognise the adults mentioned on a birth certificate issued as the legal parents of the child.” The text, which is not legally binding, nevertheless reflects a distinct cultural attitude and calls on the Commission to take action. In fact, it calls for same-sex partnerships and families with children to be aligned with marriages and families formed by a man and a woman. 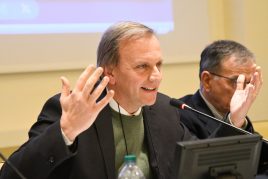 “There is an attempt to combine two different situations in one. Indeed, a same-sex union and the couple’s relationship with their children are two distinct situations”,

said Italian jurist Alberto Gambino, president of Scienza & Vita and vice-rector of the European University of Rome, asked to comment on the EP Resolution by SIR. “There is a major misunderstanding,” he pointed out, “which in this case plays into the hands of the claim that these couples are discriminated against not only when some of their rights as couples are not recognised, which may indeed be a discrimination, but also when, if they have children, their rights are not aligned to those of opposite-sex parents”.

This raises a further question, because

“the children of same-sex couples will inevitably also have a biological bond with a third party, since procreation is not possible for two persons of the same sex without the intervention of a sperm donor or a woman who makes her uterus available.”

“To align opposite-sex and same-sex couples as regards the relationship with their child is therefore not possible.” And therefore

“the same legislation cannot apply to both cases. This is because of the substantial difference between the two legal situations, a distinction which the resolution does not appear to have taken into account.”

“While it is only right not to discriminate against persons and/or couples on the basis of their sexual orientation, to align same-sex couples with children with opposite-sex parents is problematic”, Gambino pointed out, noting that “today, any attempt to differentiate situations that are objectively biologically different is labelled ‘discrimination'”, but this case shows us that “we need to refocus our attention on the rights of the child, not just those of the parents.”

Does the European Parliament have the powers to  intervene in the field of national family law? “Just like any other political body,” Gambino replied, “when the EU Parliament adopts a non-binding provision it has the power to tackle any subject. It will then be for the Member States to decide whether or not they consider themselves free to legislate autonomously on these issues.”

As for the results of the vote, according to the expert, “it was not a sweeping majority as it was proclaimed. The share of nays and abstentions is far from irrelevant. The question is whether the issue under discussion is actually considered urgent or whether there is too much emphasis on these rights and whether a certain cultural vision of society is being forced through by the majority.”