The conference ''A Sea of History'' was held in Genoa to mark the 90th anniversary of the Italian Church's service to the people of the sea. SIR interviewed the Director of the Italian Bishops' Conference office, who highlighted numerous difficulties facing this strategic area of economic life. "Pollution, climate change, market globalisation, as well as the impact of anthropic activities, are transforming our ecosystems. Fishermen are among the most exposed groups and at risk of terminating their activity." The Pope has devoted specific attention to these themes on several occasions, to be viewed in the light of Laudato si'

“The recent pandemic made us realise the consequences paid by maritime workers due to the isolation and distance from their families. We take it upon ourselves to show closeness and sharing”: Father Bruno Bignami, Director of the Italian Bishops’ Conference’s Office for Labour and Social ministry and the Apostolate of the Sea, is among the promoters of the conference entitled “A Sea of History”, held in Genoa last weekend. It was also an opportunity to remember that for 90 years “the Church in Italy has been close to maritime workers, fishermen, their families, and those who pass through the country’s many ports”. The conference gave an often worrying analysis of the situation and offered proposals of a social, labour and pastoral nature. SIR discussed the subject with Fr Bignami. 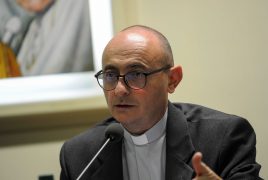 Ninety years of the apostoleship of the sea, of Church proximity to those who live off the resources of our seas. How has the life of those who dedicate their working lives on ships or in Italian ports changed over the past decades?

The life of maritime workers has changed significantly over the past decades. For example, the loading and unloading of freight is now carried out by machines, while in the past it was entrusted to manual labour. There are also some elements of continuity which the pandemic has shown are still very much present:

forms of exploitation, of job insecurity that are cause for concern.

Which pressing needs arise in a season marked by pandemics, the economic and energy crisis, climate and environmental changes, as well as pollution affecting our waters, seas and oceans?

The encyclical Laudato si’ gives us guidance. While until a few years ago the focus of the Apostleship of the Sea centred on spiritual and social issues alone, now there is a broader perspective. In addition to the dangers and loneliness of the workers, the sea environment’s problems inevitably affect the people of the sea. Pollution, climate change, market globalisation, and human impact are causing tremendous alterations to ecosystems. For example, fishermen are among the most vulnerable and endangered categories, and risk terminating their activity.

In the conclusions of the Genoa Conference, you mentioned “the many precarious workers in ports and on ships, underpaid, compelled to inhuman working hours. World trade is sustained by the unseen work of maritime workers who lead unbearable lives.” What can the Church do about this?

The injustices surrounding maritime labour must be met with a listening ear in the Christian community. That is why the voluntary association Stella Maris is authorised to conduct maritime welfare work in Italian ports. Social volunteering can be strengthened and qualified in human and spiritual terms. Furthermore,

the Church has the potential to awaken the consciences of the faithful to become more sensitive to the maritime labour,

whom someone at the conference described as “invisible workers.” Suffice it to mention that 90 per cent of the goods we have in our homes arrive by sea and have been on board for at least two or three weeks. Global trade depends on maritime labour, yet maritime workers are almost non-existent in social life. At times they are even banned from disembarking in ports. This is absurd! 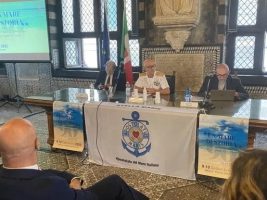 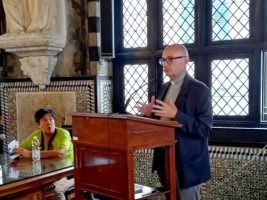 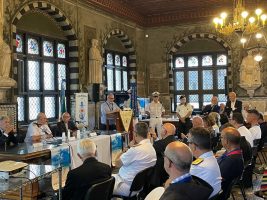 The Pope has dialogued with maritime communities in Italy on several occasions. He has even shown an interest in the activity of “fishing plastic”, aimed at cleaning the sea. What is Bergoglio’s message to fishermen?

Over the years Pope Francis has been dialoguing with some Italian maritime communities to sustain them, to ensure that Laudato si’ may become an opportunity for a joint commitment. In particular, I recall the audience with the fishermen of San Benedetto del Tronto on 18 January 2020: not only did Francis encourage them in their activity, he showed great interest in the activity of “fishing plastic”, aimed at cleaning the sea. Far from being an ecological drift, it reflects an awareness that the quality of the sea has consequences on the formation of consciences, on fostering a caring attitude, and on the quality of the fish that reaches households’ tables.

As Italian Apostleship of the Sea, what are your ideas and projects?

We are returning from Genoa to our dioceses with the awareness that we can strengthen and enliven some shared commitments, so as to give life to a generous “sea of apostleship”.

We would like to encourage the creation of the Apostleship of the Sea in dioceses where this service is still missing.

Furthermore, we would like the World Day of Seafarers (25 June), Sea Day (second Sunday in July) and Fisheries Day (21 November) to become significant moments of diocesan pastoral attention to the world of seafarers. Finally, we hope that the Church will continue to be a vigilant sentinel in ports, supporting the difficulties of maritime workers. Participation in territorial welfare committees and daily dialogue with the people is indispensable.