Continues the story of Gholam Najafi, a young Afghani writer who returned to his home country with a dream: to build a school for children near Herat

I told many people about it, but never before had I considered the subject of imprisonment so seriously. Last night I had a dream in which I relived an episode from my past. I was in an Iranian prison, the one I described in my first book, ‘My Afghanistan’. There were many people there, I was sleeping in a cell next to two inmates, but there was no room for me. I asked the other inmates if they could make some room for me to rest, but they all said no. So I got up and asked the prison warden if I could at least have a notebook and a pen to write down my recollections. Yet again, the answer was ‘no’. I have always wished to keep a diary, even though back then I was illiterate. In my dream, I had the opportunity to write, accidentally finding an old notebook of mine in my pocket, along with a pen. I recall cherishing these thoughts tucked under the blanket, in the dark. Significant memories to be relived one day, in order to record those moments as I do today with my photographs and poems. 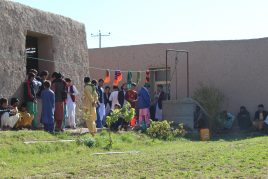 A few days ago I was invited to a wedding at the farthest outskirts of Herat, near the countryside, where I had never set foot. This is cauliflower harvest season, 10 Afghan cents a kilo. During the journey, I marvelled at this fertile land even at its hardest, its ploughed fields, until I finally reached the home of the bride, where I had the opportunity to see young women dancing around the bride. Before the wedding lunch, I visited some farmers in their homes to hear their stories and ask about the costs and procedures for the production of milk, yoghurt, cheese, butter, meat, timber, about the depth of a water well, in other words, about their lives. It feels as though the sea can be found at a depth of only six metres. For how many seasons do the clover lawns we used to pick from the Ghazni villages continue to grow? There were two back then, but here the yield is tenfold. I was treated to tea as they told me their stories. I listened while the dishes took shape and taste through their hands. An enchanting sight. I felt that without farmers and artisans we would all be fed by machines. As I returned to the bride’s home for the wedding party I gazed at the ploughed land, intersected by the homeward road. There were guests waiting outside the house, devoid of many rooms. They washed their hands as in olden days, by the well, then they went inside to eat the freshly-cooked mutton. I stood for a long while watching and photographing the barn with the cows and the hen house full of chickens. Beehives stood all around the meadows, the bees flying hither and thither, as the season ended. All of my memories were coming back. Of the many people present I was the only one taking pictures and appreciating these changes. The bride’s father was returning home with a veil of sadness, and we with him, because he knew he would find it empty. His thoughts turned to the happiness of his in-laws who had a bride at home. 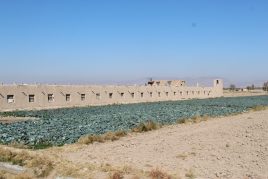 An Afghan saying goes: ‘It’s either the grave or the fun.” Everyone fights during battles, but only those who survive have fun. At the wedding, everyone danced and ate, men, women and children. Scattered across the countryside they watched the sunset: a guest came back to drink tea while another one ran up to the stream, which here they call sea, but there is no sea. They ran across the ploughed land in anticipation of spring and then, in the evening, they returned home. The party is over. In a couple of weeks my days in Afghanistan will be behind me. I will be travelling to Iran. While many years ago I was living there as an illegal immigrant, this time I am coming as a poet who seeks his past sorrows in Tehran, somewhere in the depths of his heart. We should not waste hours weeping. This is life and this is the parting of the ways: many of us Afghans are on our way to Exile. While you might consider it lucky to have escaped, I hope everyone finds their own escape route into other lands.