A total of 383 children have died and 743 were wounded; 5,718 civilians have been killed, with 8,199 wounded since the Russian Federation's invasion of Ukraine. These are some of the figures contained in a report released by the competent authorities of the Ukrainian government (Office of the Ukrainian Ombudsman), discussed during an online meeting of the International Forum of Catholic Action (IFCA) attended by H.B. Sviatoslav Shevchuk, Major Archbishop of Kyiv. The document features officially recorded data provided by the Ukrainian government, while no data is available in Russian-occupied territories, where fighting is ongoing

As of 9 September 2022, based on data released by the Register of Pre-Trial Investigations, “as well as other sources in need of further confirmation”, 383 children have been killed and 743 were injured since the Russian Federation’s invasion of Ukraine. However, the exact number of dead and injured children resulting from the ongoing fighting being waged by the occupying forces in Ukrainian cities, a blatant breach of the child’s inherent right to life and safety as enshrined in the Hague and Geneva Conventions and the UN Convention on the Rights of the Child, is impossible to establish. Data released by the UN Human Rights Monitoring Mission show that to date, 5,718 civilians have been killed and 8,199 were injured. The killing of civilians, the bombing of once-peaceful towns and civilian targets carried out by Russian army “are war crimes and crimes against humanity pursuant to Articles 7 and 8 of the Rome Statute of the International Criminal Court, and a grave violation of the provisions of four Geneva Conventions of 1949 and their Additional Protocols.” These are some of the figures contained in a report released by the competent authorities of the Ukrainian government (Ukrainian Ombudsman Office) discussed during an online meeting of the International Forum of Catholic Action (IFCA) attended by H.B. Sviatoslav Shevchuk, Major Archbishop of Kyiv. The document features officially recorded data provided by the Ukrainian government, while no data is available in Russian-occupied territories, where fighting is ongoing. 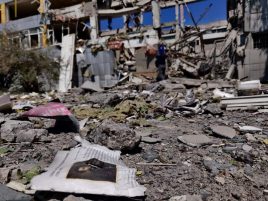 A total of 130,000 buildings have been destroyed. Over 1.6 million children on the brink of famine. The humanitarian situation in Ukraine is dramatic, the document notes, marked by ongoing violations of the right to housing, health care and education, in the wake of the destruction of peaceful villages by Russian troops. Staggering figures chronicle the destruction or damage of over 130,000 buildings (more than 3.5 million people were left without housing), of 2472 educational facilities (including 764 kindergartens), 289 of which cannot be rehabilitated, of 903 healthcare centres (127 cannot be rehabilitated) of 481 pharmacies (43 cannot be rehabilitated), 89 social security institutes, 511 administrative buildings, 205 churches, temples, mosques, 203 cultural buildings, 391 factories and businesses, 309 bridges and river crossings and the like, 25 thousand kilometres of roads, 1991 shops, 27 shopping centres, 28 oil depots, 18 civilian airports; 4 ports and port infrastructure. UNICEF estimates that out of 3.2 million children who remained in their homes in Ukraine, approximately 1.6 million face the risk of famine and food shortages as a result of the war. Attacks on water infrastructure and power outages have left approximately 1.4 million people in Ukraine without access to drinking water. A further 4.6 million have limited access.

Banned weapons used against civilians. The Report denounces the Russian Federation’s use of “prohibited weapons against civilians and civilian targets” and the shelling of numerous villages and towns (Ternovy Pody, Myrne, Lyubomyrivka, Zorya and Kotlyareve, Shyroke, Peremoha, Inhulka and Bereznehuvate). Rocket and artillery strikes are ongoing in Kharkiv and Chuhuyiv where one person has died. The districts of Izyum and Bohodukhiv were also hit. A total of 10 people were reported to have been wounded in the region yesterday: 8 in Kharkiv, 1 in Lozova district, 1 in Chuhuyiv district. Five people were killed (3 in Kharkiv, 1 in Chuhuyiv district, 1 in Izyum district). Russian forces opened fire in Nikopol district, Dnipropetrovsk region, using heavy artillery. Summer cottages and farmhouses were damaged as a result. The Pokrovsk, Kramatorsk and Bakhmut districts in the Donetsk region were also under attack. In the past few days, the Zaporizhzhia region reported 28 cases of destruction of civilian infrastructure facilities caused by shelling attacks carried out by Russian occupying forces. The hospital in Velyka Pysarivka was hit by air strikes,  healthcare facilities have been destroyed, with seven people wounded. The Report reiterates that the use of these weapons of mass destruction against the civilian population “is a crime against humanity and a violation of the 1949 Geneva Conventions.” 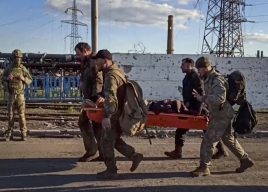 Forced mobilisation, kidnappings and torture. The document reports violations of the “right to personal freedom, of the inviolability of human dignity” and other fundamental human rights, along with “forced mobilisation of the local population enacted by the enemy in the occupied part of Chuhuyiv district in the Kharkiv region. Draft-age men are detained and sent to the occupied city of Vovchansk where the so-called conscription centre is located.” Forced mobilisation in Russian-occupied territories violates Article 51 of the Geneva Convention on Protection of Civilian Persons in Time of War, the document reads. It strictly forbids the occupying force from coercing protected persons to undertake any work which would involve them in the obligation of taking part in military operations. Russian soldiers’ abduction of the Secretary of the Municipal Council of temporarily occupied Kakhovka, Kherson region Iryna Goncharova, along with her husband Volodymyr Stupin, dates back to September 6. The capture and torture of hostages, the Report notes, “is an act of terrorism under the Council of Europe Convention on the Prevention of Terrorism and a war crime under Article 8 of the Rome Statute of the International Criminal Court.” 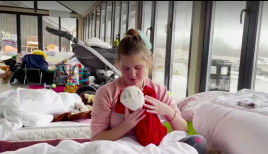 Deportations and displaced persons. The document denounces the “forced displacement of Ukrainian inhabitants as a result of the war and forced deportations to the Russian Federation.” According to the UN 14.04 million people have been forcibly displaced, crossing borders in search of safety. Over 12 million (12,324,430) people crossed the Ukrainian border into neighboring countries from February 24 to September 7, 2022. An estimated 9.8 million Ukrainian citizens entered EU countries during that period. More than 4 million Ukrainians have applied for temporary protection. According to data from UNHCR, more than 7.1 million Ukrainian citizens are registered in European countries as refugees. Approximately 4.5 million IDPs are officially registered in Ukraine, according to the Ministry for Social Affairs, but they number 6.8 million according to the UNHCR. A total of 7420 Ukrainian children have been forcibly deported to Russia or to occupied territories. These findings have been verified by the National Information Bureau (NIB). In parallel, news outlets of the aggressor country, citing sources in the military departments of the Russian Federation, report that more than 4 million people, including 628,000 children, have been deported to the territory of the Russian Federation as of September 9. As many as 33,000 persons have been deported to 652 temporary reception centres, specifically set up to accommodate them. The occupying power – the Russian Federation – committed grave violations of the provisions laid down in Article 49 of the Geneva Convention for the Protection of the civilian population in time of war, prohibiting the “individual or mass forcible transfers, as well as deportations of protected persons from occupied territory.”