Air raids and bombing attacks in Myanmar continue non-stop. The Church of the Sacred Heart of Jesus in Doukhu has also been hit. One of the two bell towers was completely destroyed by an air strike yesterday. "The risk is very great. We're caught in the midst of a battlefield," Father Francis Soe Naing, Chancellor of the Diocese of Loikaw told SIR, and sent footage pictures documenting the situation this morning. Some 200 evacuees have taken refuge in the Cathedral but residents have already fled from all six parishes in the city of Loikaw. "We don't know what will happen to us. However, we trust that God will protect us" 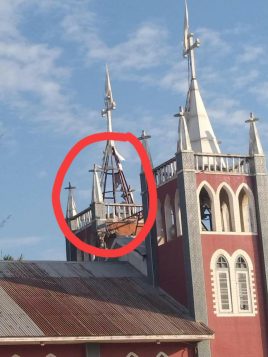 Air raids and bombings continue non-stop in Myanmar. In Doukhu one of the bell towers of the Sacred Heart of Jesus Church was completely destroyed in an air raid yesterday. “It’s a very dangerous situation. We’re caught in the middle of a battlefield,” Father Francis Soe Naing, chancellor of the diocese of Loikaw, told SIR. He sent a series of photos this morning documenting the damages of the parish church of Doukhu and the Cathedral of Christ the King in Loikaw, where approximately 200 displaced persons, most of them women, children, elderly and sick persons, have been sheltered for days. “Loikaw is under attack, it is heavily hit almost every day by gunfire, air and helicopter raids,” said the priest. “People are fleeing in search for shelter, and very few people are still left in the city.” Some 50,000 out of a population of 90,000 – two-thirds of the inhabitants – have fled their homes to seek a safe place to stay. Loikaw has become a deserted city. 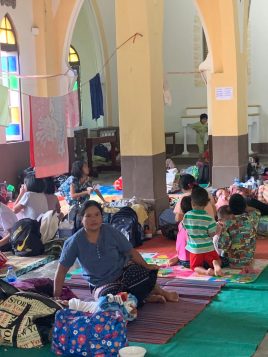 Approximately 200 displaced persons have been given shelter in the Cathedral complex, together with a few priests and nuns.

“We will stay here as long as we can,” he said. “All six parishes in Loikaw city have already been abandoned. We don’t know what will happen to us. However, we trust that God will protect us.”

The photos sent from the Christ the King Cathedral complex depict women and children in prayer, children involved in educational and recreational activities, sharing of meals. The displaced persons have been accommodated inside the cathedral, with their few remaining belongings. 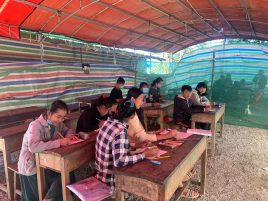 Myanmar has been facing an escalation of violence since last week, with massive fighting between the military junta and popular resistance forces, especially in ethnic areas and in the predominantly Christian States of Kayah, Chin and Karen, where thousands of civilians have been forced to leave their homes and flee to the forests or seek refuge in churches or other institutions. Local organisations have reported difficulties in delivering humanitarian aids to people in need in those areas as a result of security constraints, military roadblocks and lack of permits. 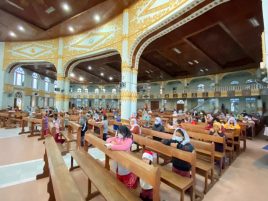 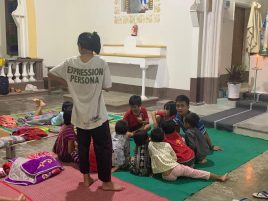 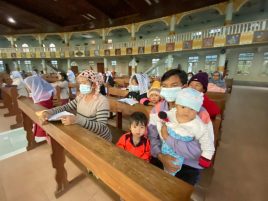 In a statement, Unicef expressed “deep concern” over the escalation of the conflict in Myanmar and condemned “the reported use of air strikes and heavy weaponry in civilian areas.” Unfortunately, victims of the attacks also include children. Unicef made known that the body of a 13-year-old boy was found in Matupi, Chin State, on 8 January, while a 12-year-old girl and a 16-year-old boy were wounded by gunfire in Loikaw, Kayah State, following intense air and mortar attacks. On the same day, a 7-year-old girl was injured by heavy gunfire in Hpa An, Kayin State. On January 7, a 14-year-old boy and two 17-year-olds were shot dead in Dawei Township, Tanintharyi Region. On January 5, a one-year-old four-year-old girl were wounded by heavy gunfire in Namkham, Shan State. The humanitarian NGO issued an appeal calling for the protection of children “as a top priority”. 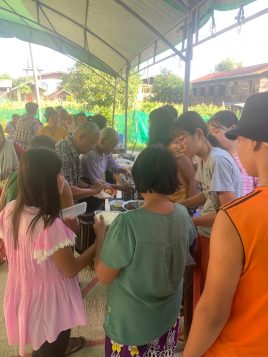 A report published by UcaNews, Catholic Asian news agency, found that four dioceses – Hakha, Kalay, Loikaw and Pekhon – of 16 dioceses in the conflict-torn nation have been severely affected by a military coup last February that triggered protests and mounting resistance from the militias. Amid the escalating war, bombings and raids have also hit churches – especially in the predominantly Christian regions inhabited by the Kayah, Chin and Kachin minority groups. Priests and ministers have been arrested while many unarmed civilians, including Christians, have been killed. More than 1,400 people have been killed, including at least 50 children. Over 10,000 people have been arrested since the coup.