"Our first objective is to hold a national demographics conference around the 15th of May each year, involving representatives of the political, business, cultural and sports realms, with a nationwide reflection on this new social issue. Once again we will hold it in Rome on May 12-13 2022”, said the Foundation’s president

“Natality is the new social challenge, for if we fail to act now everything will collapse. In fact, it’s a social issue that touches everyone, including those who deliberately decided not to have children or do not want to have children of their own. It concerns our future. It’s about the hope of a people. Indeed, even those who freely choose not to have children of their own ( the decision to have or not to have a child should never be an obligation) will need tomorrow’s generations”, said Gigi De Palo, president of the National Forum of Family Associations, on 14 May 2021, when he fulfilled his dream of organising the first ever “General States of Birth” attended by distinguished guests, including Pope Francis and Prime Minister Mario Draghi. These extremely topical remarks by the President of the Forum epitomise a vision of the future and embody an enduring dream. Again this year, the “General States of Birth” will be held on 12 and 13 May. The Conference is promoted by the Foundation for Natality, created by De Palo himself, who serves as its president. SIR asked him about the goals of the new organisation and the urgent need to take action against the demographic crisis. 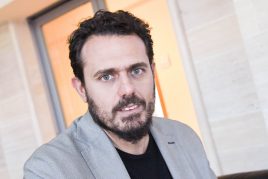 When was the Foundation created and what is its purpose?

The first objective of the Foundation is to hold the “General States of Birth” each year,

around the 15th of May, involving representatives of the political, business, cultural and sports realms, with a nationwide reflection on this new social challenge.  As last year, we will be holding it again on 12 and 13 May, at the Auditorium della Conciliazione in Rome. The Foundation was created to respond to the need for an organisation that would specifically address this matter, although naturally the Forum of Family Associations will continue to maintain its role. It was necessary to create a structure that could help with fundraising, organisation and campaigns. It is equally important to reach out to schools to raise awareness on these issues.

It is a real battle that we have to fight, and the Foundation for Natality is a veritable “tank”: we needed a tool to fight this battle, over and above the issue of family policies, in order to be on the cultural front line of hope, childbirth and the future.

It is also a cultural battle…

It is, and it’s a great one. We must convey the notion that

having a child is an act of freedom.

But today it is viewed as a nostalgic revival of the Italian Fascist youth organization “Children of the She-Wolf” by some, while others say that the world is already overpopulated and that there is no need to encourage childbirth – it’s risky. Conversely, we believe that fertility rates are connected with the hope of a country. If today I am trying to do something to improve the world, I am working hard in associations and voluntary work, I am doing it not only for reasons linked to my faith, but also because I have children and I want to leave them a better place to live in.

The challenge of having a child has a huge political impact not only on those who bear the child but also on others, because that child is an added value, he or she is a common good, he or she will help sustain pensions and health care, but above all that child inspires all of us to make the world a better place.

Otherwise, why should we care about melting glaciers? In a hundred years we will no longer be here. Instead, hope is what binds generations together. Childbirth has many cultural implications: hope, intergenerational solidarity, we are all connected, as the Pope says.

We are experiencing a major demographic crisis in our country…

people want to have a family and children, but in Italy that desire cannot be fulfilled.

If young people are denied the opportunity to pursue their dream of having a family and are only given the chance to focus on themselves, it clips their wings. The issue of natality involves everyone. What happens to businesses without children, without someone who buys products?  GDP collapses. In the world of sport, the ones winning the most gold medals are those with a rich breeding ground to draw from. The real estate market is also affected by birth rates for it is based on requests for flats, large or small, from new families, depending on the number of children. Minister for Culture Dario Franceschini recently released a public notice to relaunch small historical villages, which also aims to counter depopulation and thus encourage population growth in small villages. In short,

every aspect of our life is affected by natality. These themes must be addressed without engaging in ideological or religious discourse, but by trying to reach out to every sector of society. This is a great battle we all need to fight together.