The Day for the advancement and development of dialogue between Jews and Christians will be celebrated on January 16. Meetings and round tables will be held across Italian dioceses. Interview with Msgr Ambrogio Spreafico, President of the Italian Bishops' Commission for Ecumenism and Dialogue: “Our objective is to invite communities to experience and understand the Jewish world as a reality of men and women in our midst with a long-standing faith tradition that lies at the source of our Christian faith. Jesus was Jewish in every respect, as were Mary, Joseph and the apostles. We are all - as Pius XI said in very tragic times - spiritually Semites”

An “important day” to uproot all forms of hatred, to recognize one other as brothers, to build a better world. Thus the two leaders of the CEI Office for Ecumenism and Dialogue presented the XXXI Day for the advancement and development of dialogue between Jews and Catholic Christians, which this year will take place on January 16. In recent years – explained the Director of the Office Fr Giuliano Savina – a number of Meghillot scrolls were opened on the table of friendship and fraternity.

In 2020 the Day will be centred on the Song of Songs. “We hope that women and men of different generations will gather around these tables. Our heartfelt wish is to hand over and transmit to the young generations these Sacred texts that constitute the foundation of the understanding of our roots, the lack of which would not only impoverish our civilization, but would also risk being at the mercy of the prophets of doom who always risk taking over”, ranging from disgraceful choirs in stadiums to acts of outright vandalism against Jewish places of worship and memory. Don Savina is categorical: “indifference and ignorance should be combated vigorously, starting with a correct understanding of the Scriptures.” SIR interviewed Msgr Ambrogio Spreafico, Bishop of Frosinone, President of the Italian Episcopal Commission for Ecumenism and Interreligious Dialogue. 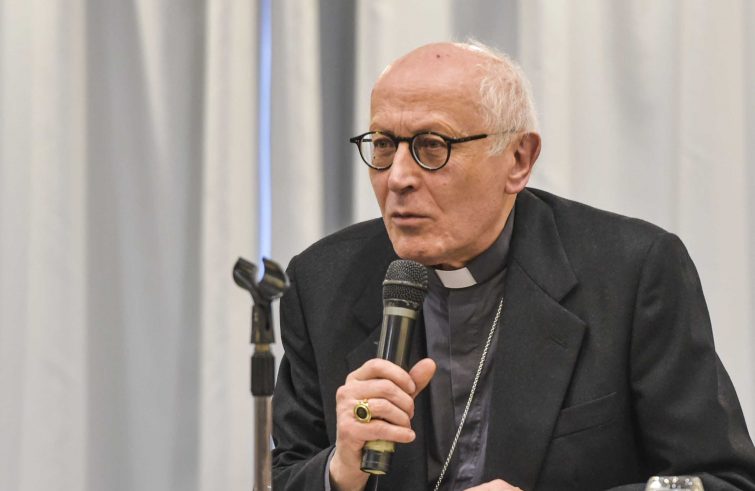 What is the most important aspect of this yearly “Day”?

Our objective is to invite our communities to experience and understand the Jewish world as a reality of men and women in our midst with a long-standing faith tradition that lies at the source of our Christian faith. Jesus was Jewish in every respect, as were Mary, Joseph and the apostles. We are all – as Pius XI said in very tragic times – spiritually Semites.

In the presentation of the Day you outlined a set of alarming figures. In 2016, 382,000 anti-Semitic posts were published online, 43.6 posts per hour, one every 83 seconds. Of these, 2,700 have appeared on Italian social networks. Moreover, as many as 23 posts per hour were posted in the period between January 1 to 24, 2018, totalling 550 daily posts featuring anti-Semitic and neo-Nazi slurs, 4.5 posts per hour, as well as 108 daily posts denying the Holocaust. You previously mentioned the tragic years of Pius XI. Are they returning?

I hope not. I trust that Europe has learned the lesson of the tragedy of war: over 70 million dead, 6 million Jews exterminated, along with 500 000 gypsies, political opponents, priests and many others. My deepest hope is the preservation of the living memory of those tragic events, but preserving it today entails to avoid reverting back to a mentality of exclusion of our fellow other. Anti-Semitism is the most tragic manifestation of a form of exclusion that in our society is expressed in the hatred of strangers, intolerance of immigrants, racism, rejection of the weakest, the poorest, the elderly.

Indeed, there are many forms of exclusion in our world. Far too many.

January 27th is Holocaust Remembrance Day. What does it mean to the Jewish world?

Remembrance is fundamental to keep alive the memory of the past and to understand the present in which we live. It also serves to provide a vision for our future. Today we see people constantly complaining, people who feel they are victims of a discomfort that may even be justified, but it gives rise to countless fears and causes nostalgia for the past.

Remembrance is not nostalgia.

Remembrance is something we cherish deep inside, it enables us to better understand the suffering of others, the hurting of the world, the neglect of our elderly, the exclusion of the poor. It allows us to understand that we must fight for a future in which we can live together in peace with one another.

What could be the contribution of the religious traditions of our country?

I suggest two tracks: encounter and friendship. The first is the main course: we must come together to get to know each other and listen to each other. The path of friendship is the path of dialogue, and in dialogue we must try to develop a culture of mutual understanding and solidarity in diversity, to build a culture of peace in our present world.