“Operation Dove" in Mykolaiv. Two Italian youths decided to live for a period of time in a shelter in Mykolaiv, sharing their daily life with the war-stricken population. They give a helping hand in the distribution of humanitarian aid, offering a vital service, even though this is not their mission. Giacomo and Matteo are above all a presence of peace. “We are not saving anyone", says Matteo: "Ours is simply a journey we are undertaking with others. Living in this way makes us realise that the injustices suffered by others are our own. It is not out of do-goodism, but because being with them, living what they live, makes us understand what they are going through and what they need, and for this reason I will do all I can to alleviate their suffering, as I would do to my own brothers”

(from Mykolaiv) Giacomo has just accompanied Natalia home. Although her apartment is only a short distance from the shelter, in a building across the street, this elderly woman is not comfortable being alone and ever since that terrible February 24, she decided to live in a shelter together with other people who have now become her family. She has to go home to open the door to two workers who are going to fix her broken windows shattered by the bombs in the first days of the war. “The slightest noise makes her jump with fear,” Giacomo tells us. “I was with her up to now. She told me I could go and that it was not necessary to send for her again. She would return on her own.” Giacomo Ceruti, a 24-year-old from the Italian town of San Donato Milanese, a graduate in political science, is one of the two Italian young men who decided to spend a period of time in Mykolaiv. The other humanitarian worker is Matteo Pisani, 37, a physiotherapist. He runs a foster home in Bologna with his wife, home to their four children and to two other children “regenerated by love”. Their life these days goes on simply doing what everyone in Mykolaiv does. 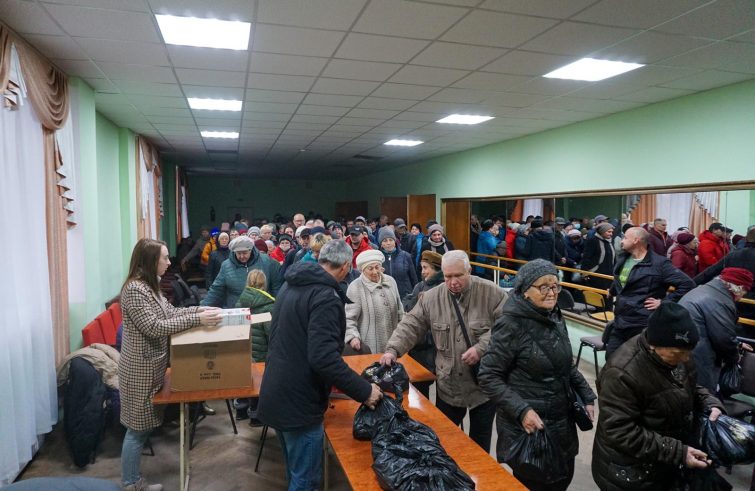 Operation Dove is a project created by the Pope John XXIII Community to give concrete expression to non-violence in war zones. There is plenty to do in the Mykolaiv shelter. Truckloads of humanitarian aid are coming in and the two young Italians are helping to unload the boxes, organize the storage areas, and fill the parcels. Every day, vans loaded with humanitarian aid depart from this centre to distribute relief supplies across the city and the neighbouring villages, which remained under Russian occupation for months with no access to drinking water, food or basic necessities.  A total of 500 parcels were distributed after Mass last Sunday. “I am here because there is no such thing as a second-class life”, says Matteo.

Every life is precious and deserves to be preserved, supported and defended. That is why we are here. To say that our life is not more important than the lives of other people, and to walk together.” 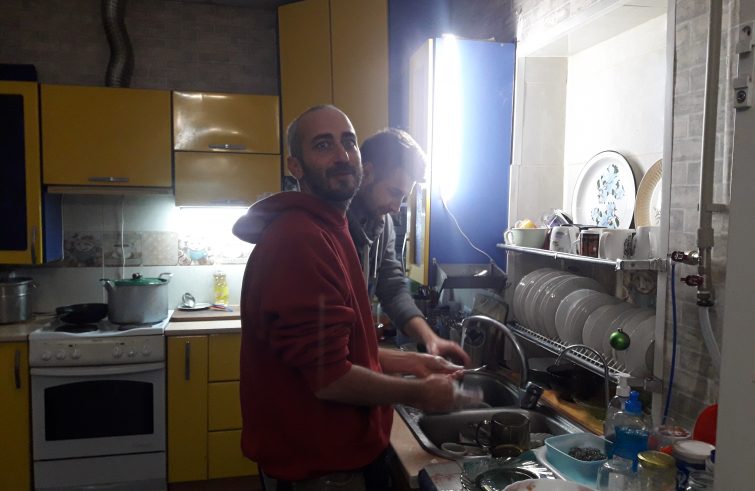 Moreover, the “humanitarian” work is only a part of their mission, as much as it is useful, indeed vital. In fact, Giacomo and Matteo are most importantly a presence: they sleep in a room in the shelter, eat with them, have conversations, keep them company, teach them Italian card games. “We are not rescuing anyone here,” Matteo points out. “Ours is simply a journey we are undertaking together with others, not knowing our final destination. I think this is what revolution is all about: moving from a welfarist approach to wanting to share a stretch of the journey together.

Living in this way makes us realise that the injustices suffered by others are our own. It is not out of do-goodism, but because being with them, living what they live, makes us understand what they are going through and what they need, and for this reason I will do all I can to alleviate their suffering, as I would if they were my own brothers.” 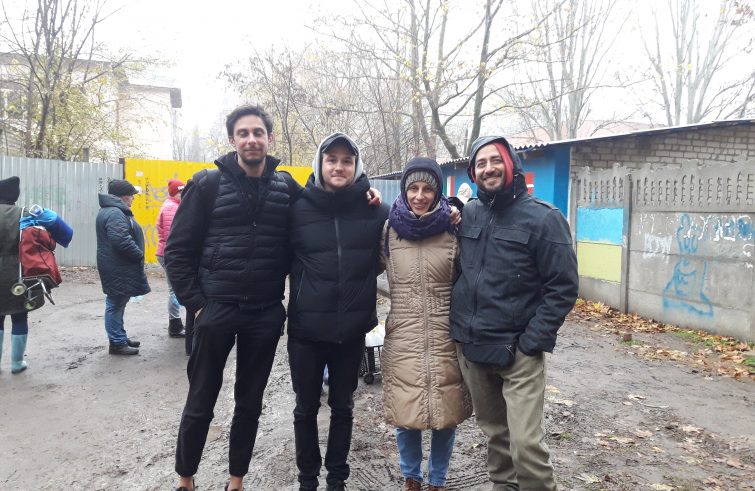 Giacomo arrived in Mykolaiv after having joined the Peace Caravan in June, replicated in September, which brought busloads of humanitarian aid to the city. The initiative was promoted by over 175 Italian organisations under the #Stopthewarnow banner. “I saw the people I had met back then. They were all sorely tried and weary,” he says. “Facing a 9-month conflict and having to share the same living space with other people for such a long time without ever enjoying a moment of privacy is very hard.” Matteo and Giacomo are now members of this extended family. “Paradoxically, what touched me the most during this whole period is neither their tiredness nor their pain, but the warmth with which they welcomed me,” Giacomo confided. “They value the fact that I left a distant country where I was leading a normal life and had plans, and that I chose to spend my time with them sharing their everyday life and its difficulties, and most of all the dangers of an ongoing conflict.” What is war? “A very bad thing,” Matteo promptly replies. Giacomo adds: “It’s a permanent scar. Even if the wound stopped bleeding tomorrow, it will stay with you forever.” “These are wounds that are hard to heal – Matteo goes on to say -. It will take who knows how many years to heal those hearts. But this conflict is also affecting us on the outside, as we continue viewing armed conflict as a solution to international disputes.”

“We firmly believe that military force is not the answer to conflict resolution. We are here with the people and not for the people. We are here to make it clear that they are not alone.” 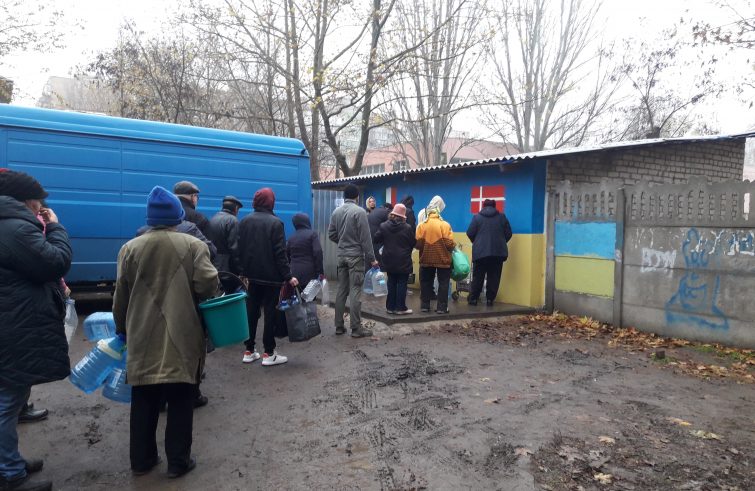 One of the favourite mottos of Operation Dove is “if you truly love me, create something I cannot imagine.” That is what this “presence” is creating on the ground. By living side by side with these persons, the humanitarian workers became aware of their needs, the most striking and urgent aspect being the absence of drinking water. As a matter of fact, the Russians’ first move was to bomb and destroy the pipelines that supplied the city’s municipal water system. The population has been without access to clean, drinking water since then. A show of solidarity, supported by the associations of the #StopTheWarNow Network, has so far made it possible to install five desalinators on site and to fund the installation of seven more. The ultimate goal is to have at least 25 to 30 desalinators in order to provide access to clean drinking water throughout the city.

This initiative, that was launched to meet a specific need, thanks to the peace caravans and the presence of peace workers like Giacomo and Matteo has become a ‘sign’ that even in war-torn lands peace-building measures can be taken.

“‘Only by spending time with persons living in war-torn contexts can we envision and plan peace-building solutions together with them”, says Gianpiero Cofano, coordinator of the StopTheWarNow Network. “Not only catering to their needs but identifying with them non-violent conflict resolution options available, for every conflict where we choose to live.

Healing the wounds means creating peace-building solutions and plans, for otherwise it would amount to accepting the evidence of violence. Not at all: we are here because we want to be peace-builders.”