Foreign Minister Nicu Popescu: “Every bomb falling on Ukraine is also affecting Moldova and our people. We call on Russia to stop the destruction now.” While Russian missiles hit Poland, widespread blackouts were reported by the Moldovan media in large parts of the country, from the Transnistria region to the capital Chisinau. But the problems are not limited to the power grid. There are also bomb threats, the rising cost of living and poverty, the discontent of the population. These are the "side effects" of the war in Ukraine. A variety of overlapping factors are causing uncertainty and anxiety

(from Chisinau) Visitors and accompanying persons are not permitted entry at Chisinau airport. Travellers, on the other hand, are subjected to long security wait times. It is recommended to be at the check-in desk at least three hours in advance. Even the small crowds of relatives, taxi drivers or chauffeurs holding up signs bearing their clients’ names, typically at the arrivals area, now have to line up on the platform outside the terminal. It’s the result of the bomb threats that have been causing havoc in Moldova for months. They affect not only the airport but also other public buildings, from public prosecutors’ offices to municipalities. They are the “external threats”, which are hard to identify because they don’t originate inside the country. It is feared that they might come from in Russia. This destablisation process is apparently aimed at fuelling popular unrest, thereby causing widespread unease, instability and conflict throughout the country.

Chisinau is a compulsory transit destination for people entering Ukraine or, conversely, for those leaving the war-torn country. “Tensions are high,” says Msgr Cesare Lo Deserto, Vicar General of the Chisinau diocese. “There were signs that something might finally change in this war only a few days ago. But the latest events have sadly confirmed a situation of uncertainty and unpredictability that does not bode well, besides the fact that war also brings about collateral problems.”

As a matter of fact, the countries bordering Ukraine are vulnerable to the threat of Russian missiles, which can strike at any moment and especially at areas near the border.

A missile killed two people in Poland two days ago. But a similar incident occurred last week, when a Russian rocket fell in the village of Naslavcea, hitting a school that was fortunately closed for the holidays. Twenty days ago Russian missiles fired from the Black Sea aimed at Lviv violated Moldova’s airspace and were intercepted by Romania’s anti-aircraft artillery. This violation alarmed WizzAir to the point of deciding to cut its flights.

These incidents are normally referred to as “collateral damage of warfare.” While Russian missiles hit Poland, widespread blackouts were reported by the Moldovan media in large parts of the country, from the Transnistria region to the capital Chisinau. The Minister for Infrastructure and Regional Development, Andrei Spînu, said: “Following Russia’s attacks on Ukraine’s energy infrastructure in the last few hours, a power line supplying electricity to Moldova was automatically disconnected, causing massive power outages throughout the country”. Foreign Minister Nicu Popescu remarked:

“Every bomb falling on Ukraine is also affecting Moldova and our people. We call on Russia to stop the destruction now.” 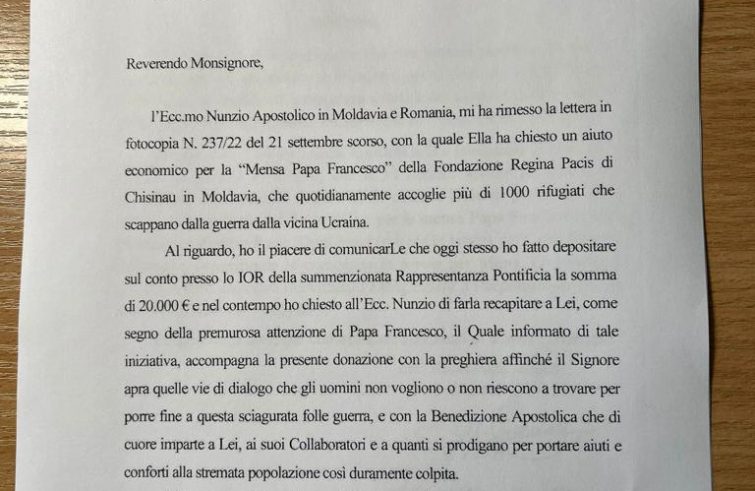 “The shock waves of the war are affecting us all,” said Msgr. Lo Deserto. “The refugees continue being taken in, although there is no mass influx. Rather, we see a steady stream of people who remain here – the elderly and children in particular – while others, especially the youngest, cross the borders on their way to Europe.” There are over 100,000 Ukrainians in Moldova. Poverty is growing steadily across the country, and this too is a war-related consequence, because prices have risen and the supply of essential commodities now only arrives from Europe at much higher prices. One thousand people every day, all of them refugees, flock to the soup kitchen run by the Catholic Church in Chisinau, to the extent that

having been informed of this initiative, Pope Francis made a donation of €20,000 to the Regina Pacis Foundation last week, “with the prayer – reads a Letter signed by Card. Konrad Krajewski – that the Lord may open paths of dialogue that men are unwilling or unable to create, so as to put an end to this insane war.” 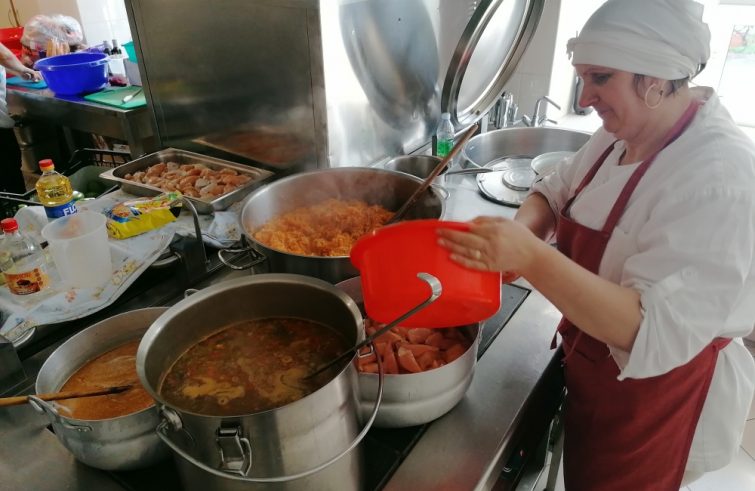 Bomb threats, missiles, energy and gas blackouts, increased cost of living and consequent poverty. A variety of overlapping factors are causing uncertainty and anxiety. “The government is doing its utmost to maintain stability in the country, but right now the situation is hard to control,” pointed out bishop Lo Deserto. The most worrying aspect however is an emerging degree of discontent among the people, precisely because of the aforementioned “side effects.” A destabilised and restless country enhances the risk that it may opt for a Moscow- and not a European-oriented policy.

“It is therefore important to remain calm,” said the priest, “and identify the best solutions to the gas and energy problem, along with the resources needed for the country’s development.

The EU accession process is underway, but this process has its own timeframe, it takes time, and it demands that some internal problems be solved, such as the border problem, with reference to Transnistria , as well as the problem of corruption, which the government is working hard on. It is a very critical moment.”