The Italian Prime Minister met with the top officials of EU institutions. The discussions covered all the urgent issues on the table: war, the price of gas, NRRP, migration. A necessary debut at the European headquarters, amidst smiles and watchwords, to "weigh up" relations between the leadership of the government in Rome and those in charge of EU-27

“We are no Martians” (Meloni said referring to the Italian government in the EU); “A strong-willed woman” (Metsola said of Meloni), “I found ears that were willing to listen” (Meloni said referring to the day’s meetings). Unconventional, albeit straightforward, remarks, along with a few atypical snapshots: Prime Minister Giorgia Meloni’s visit to Brussels took place with no unexpected political twists. If anything, a few mishaps (Von der Leyen’s delay at the meeting, owing to bad weather), honest and cordial conversations, forthright discourse, handshakes, hugs, and plenty of smiles.

Utmost attention. Meloni’s made her first international visit to Brussels (November 3): a sensible move, in the knowledge that in EU headquarters she would receive the utmost attention given Italy’s importance and standing in Europe (also thanks to the esteem earned by her predecessors at Palazzo Chigi) – along with occasional ill-concealed prejudices with respect to the Euro-sceptic traits characterising some of the political parties that form part of her government coalition. “I wanted the first institutional visit of the Italian government outside its national borders to be here in Brussels. “I wanted to send the signal that I brought today of an Italy that obviously wants to participate, collaborate, defend its national interests while doing it within the European dimension, find the best solutions together with other countries on the great challenges that we are faced with,” Meloni told journalists after the meetings. That’s all. That was meant to be the message: and that is what it was. 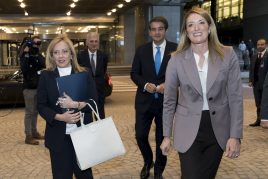 “Positive exchange.” The Italian Prime Minister met with European Parliament President Roberta Metsola, EU Commission President Ursula von der Leyen and European Council President Charles Michel. Prior to the meeting, she had lunch with Commissioner for the Economy Paolo Gentiloni. The talks revolved around the war in Ukraine and its repercussions (energy, security), the implementation of the NRRP (there is little room for the amendments proposed by the centre-right government), and migration. Meloni said: “The exchanges were very frank and positive even from a personal and human angle. I am happy with how this day went, during which I brought the Italian point of view on some of the issues we need to tackle.” The meeting touched on “finding a rapid solution at European level to the problem of rising energy costs and setting a price cap on gas.”

“People in flesh and blood.” The issue of inflows of migrants arriving from other continents is particularly complex: “We discussed migratory flows,” Meloni pointed out, “and a change in the outlook of Italy’s position, whereby the priority is one already foreseen in European regulations, namely the defence of the EU’s external borders.” In actual fact, Europe expects Italy not to abandon ships filled with refugees in danger of dying offshore.

After all, Italy has been asking other countries to show greater solidarity in the reception of migrants for years. All the last prime ministers have repeated this request, to no avail.

Giorgia Meloni made some interesting personal remarks regarding the atmosphere of dialogue she found on her visit: “to be able to meet and speak directly with the people here in Brussels can serve to debunk a narrative that has been made about me and the Italian government. We are no Martians but people in flesh and blood explaining their positions.” 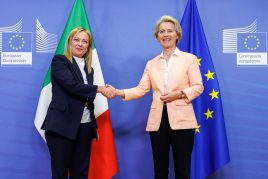 Strong signal. After the meetings, Metsola, Von der Leyen and Michel issued brief, formal statements, also via social media, expressing the positive outcome of the talks with the representative of the Italian government. “Thank you Giorgia Meloni for the strong signal sent by your visit to EU institutions on your first trip abroad,” Commission President Von der Leyen tweeted. “It was a good opportunity to exchange on critical issues ranging from support to Ukraine, energy to the Next Generation EU plan for Italy and migration.”

The path of dialogue is paved. Now it is up to the new Italian government to fulfil its European commitments: it is necessary to acquire trust in order to subsequently – as they say – ask for “what is due” (to assert national interests) in the EU.

President Meloni has already planned her next international meetings: Sharm El-Sheikh Climate Implementation Summit (COP27) 7-8 November; G20 summit in Bali (including the meeting with US President Joe Biden) November 15-16; Balkan-EU summit in Tirana in early December; and the first European Council on December 15-16, also in Brussels.