Setbacks, explosions and unforeseen events have not stopped the peace caravan, which resumes its journey towards Odessa today. The situation in Mykolaiv, where "strong explosions" were heard yesterday, is causing preoccupation. The bridge that connects Odessa to Mykolaiv, which the peace caravan must take to reach the city, was hit by shelling. The alternative - according to the relief workers - is to proceed via Zaporizhzhia, but safety conditions there are probably worse. Still, they are continuing with the journey. "Of course we are afraid," confesses one of 50 Italian volunteers. “We were aware of the risks. We knew we were headed to a place under attack, but there are people waiting for us and they need our help" 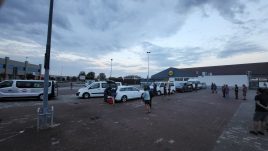 Unforeseen events had been taken into account. Last night, the peace caravan that set off from Gorizia for Ivano-Frankivs’k was stopped at Beregurany-Berehove on the Ukrainian-Hungarian border for four hours due to purely administrative and bureaucratic controls. The vans loaded with humanitarian aid and fifty volunteers were waiting for the go-ahead from the military authorities, which ultimately arrived, but it was too late to guarantee a safe continuation of the journey, considering also the 11pm curfew imposed in the land under attack. After a brief Google search to find accommodation, they decided to stay overnight and set off for Odessa at dawn. 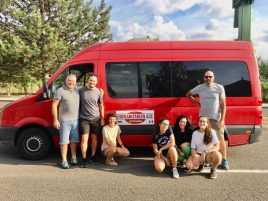 Yesterday was a very tense day here in Ukraine, with alarming reports of the situation sent out by government agencies and accessed on mobile phones via telegram. The volunteer workers are especially worried about the situation in Mykolaiv, which has been under Russian siege for months, plunging the population into the throes of hunger and thirst. The people of Mykolaiv have asked for help from the Italian volunteers and are waiting for the peace caravan with the humanitarian aid needed to hold out and survive. But the news has cast great uncertainties on the journey. Heavy explosions were heard in the city yesterday afternoon. “Everyone must go to the shelters immediately”, mayor Oleksandr Sienkovych wrote on Telegram. In one video, smoke can be seen rising from a blast on the right side of the bridge that connects Odessa to Mykolaiv, the route the peace caravan must necessarily take to reach the city. The alternative – the volunteers say – is to proceed via Zaporizhzhia, but the safety conditions there are probably worse. The blame game over Europe’s largest nuclear power plant continues. In the afternoon, Russian forces reported that Ukrainian military had fired gunshots “very close” to the power plant, and that the gunfire hit the roof of one structure within the facility.

The situation at the Ukrainian power plant in Zaporizhzhia, controlled by Russian forces, has been the subject of tensions between Moscow and Kyiv for days. However, some good, indeed very good, news arrived yesterday. International Atomic Energy Agency (IAEA) Support and Assistance Mission set out to Zaporizhzhya nuclear power plant, with Italy being part of the team. It was announced on Twitter by IAEA Director General Rafael Grossi: “The day has come, the Support and Assistance Mission to Zaporizhzhya (ISAMZ) is now on its way. We must protect the safety and security of Ukraine’s and Europe’s biggest nuclear facility. Proud to lead this mission”, he wrote. The situation in Kherson, where reports of a counter-offensive by Kyiv’s armed forces aimed at recapturing the city were circulating yesterday, is also a cause for concern in southern Ukraine. But the Ukrainian presidency has asked local media to refrain from spreading unauthorised information. “I understand our wishes and dreams,” presidential advisor Mykhailo Podolyak said. “However, I suggest to be cautious in commenting on any of our military actions.” 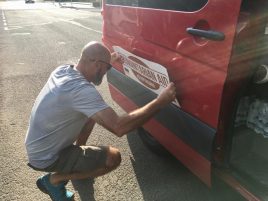 Despite the uncertainties, the war alerts, the forced stops, the peace caravan continues its journey. “We are here to offer solidarity and help in a war-torn area,” says Giuseppe Bertazzoli on behalf of Punto Missione Foundation, member of the Federation of Christian Organizations for International Volunteer Service (FOCSIV). We want our presence to be a sign of peace for this land. I am not afraid because the desire to meet this people and bear witness to the fact that peace is still possible is stronger than fear.” Andrea Stocchiero, a member of FOCSIV, remarked:  “I joined this mission because I felt it was my duty to be near people who are suffering the tragedy of war and because I felt the need to transcend the footage broadcast on TV. Those images tend to make us inured to the horrors of war and trivialise the news. This journey offers us the opportunity to plunge into reality, which makes us gain a greater and better understanding of the tragedy that is unfolding here.

Of course we are afraid. We were aware of the risks. We knew that we were headed to a place under attack, but there are people waiting for us and they need our help.” 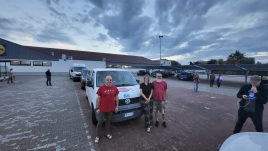 The initiative is backed not only by movements and associations. The municipal council of Recoaro Terme, represented by Ilaria Svalchiero, Councillor for Social and Youth Policies, is also involved. “We have decided to join this mission because we believe that peace is achieved through practical action, by being on the front line and being there in person. For us, being here also means keeping the spotlight on a crisis that is unfortunately turning into something normal.

These relief items are a tangible sign to tell this people that we have not forgotten them and we will not leave them behind. We are here and we will continue helping you as much as we can”.