Archbishop Paul Richard Gallagher, the Vatican's Secretary for Relations with States, concluded today a four-day visit to Ukraine. On his journey from Lviv to Kyiv, Pope Francis' top diplomat visited the sites of large-scale killings of civilians, met with the bishops of the Latin and Greek Catholic Churches and with government officials. While in Kyiv, Msgr. Gallagher had meetings with the Prime Minister, with the Head of the Presidential Administration and with the Minister of Foreign Affairs, top government officials for “a joint reflection on their perspective and the contribution the Holy See can make, both in the pursuit of peace and for future reconstruction." The Apostolic Nuncio, Monsignor Kulbokas, offers an overview of the visit to SIR

Seeing the situation first-hand, listening to testimonies, perceiving the atmosphere of a country heavily wounded by war. And reflect together with high-ranking Ukrainian government officials on possible “pathways to peace” and the role of the Holy See. 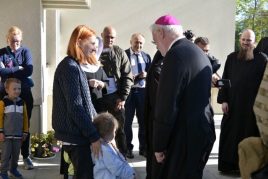 The Vatican Secretary for Relations with States, Msgr. Paul Richard Gallagher, concluded today a four-day visit to Ukraine. Archbishop Visvaldas Kulbokas, Apostolic Nuncio in Kyiv, offers an assessment of the journey. SIR contacted him when he had just left the Vatican representative in Lviv and was on his way back to the capital by car. The Nuncio accompanied Monsignor Gallagher on his journey from Lviv to Kyiv. Those were intense days during which Pope Francis’ ‘foreign minister’ had the opportunity to meet with internally displaced persons, visit the sites where massacres of civilians were committed – Bucha, Irpen, Vorzel -, meet with the bishops of the Latin and Greek-Catholic Churches and have talks with national dignitaries. While in Kyiv, Msgr. Gallagher had meetings with the Prime Minister, with the Head of the Presidential Administration and with the Minister of Foreign Affairs. 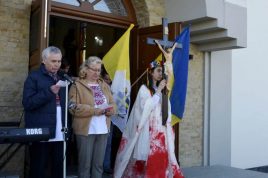 Msgr. Kulbokas, can you describe the import of Msgr. Gallagher’s presence in Ukraine?

Its relevance is manifold. Msgr. Gallagher’s visit represents first and foremost a major sign of the Holy See’s closeness to the Ukrainian people.

Furthermore, it also gave Msgr. Gallagher the opportunity to see, to witness and to perceive the situation on the ground, to gain a clear understanding of the way in which the situation is experienced, in both its negative and positive aspects. Msgr. Gallagher told me he saw so many signs of hope, even in places that had been destroyed, where the local community is starting to rebuild and resume their life. That is encouraging to see. But he also witnessed the negative aspects: the sufferings and dramatic nature of the situation.

Meetings with high-ranking government officials to jointly reflect on their perspective and on how the Holy See can contribute – both in the quest for peace and in terms of future reconstruction – were equally important. 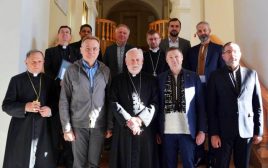 What are the requests of political authorities to the Holy See?

Without going into details, numerous requests have been made. Moral support is consistently sought. The Holy See was also asked to possibly act as mediator. The Ukrainians have made this request on many occasions and have reiterated it. They are asking for the Holy See to eventually act as a facilitator for the negotiations, provided that the opposing party, Russia, also agrees. The Holy See offers its availability, but only when both sides ask for it, not just one of them. Humanitarian aspects are another main issue. Some humanitarian concerns were mentioned in which Ukraine requires the support of the international community and in particular of the Holy See. Those are extremely complex, diverse and challenging issues, but support was requested. Finally, there is the question of the reconstruction of the country in terms of whatever support can be given. A special word of gratitude went out to the Holy See for its ongoing cooperation in healthcare, notably the Bambino Gesù Hospital. They asked for this support to be continued given the importance of treating children, especially those who are facing difficulties in receiving treatment in Ukraine now. 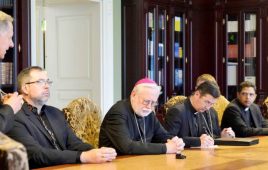 Could you tell us about the possibility of Pope Francis’ visit to Ukraine?

National authorities reiterated the invitation to Pope Francis to visit the country. Monsignor Gallagher will most certainly convey to the Holy Father everything the authorities have said and asked for.

What has this visit meant to you?

It has been a very important visit for me. It has also provided me with great encouragement in psychological and spiritual terms. It was also extremely important for my direct superior to have first-hand experience of the situation because this greatly facilitates our work. 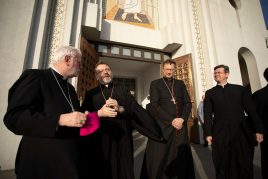 Clearly – and Msgr. Gallagher reiterated this on several occasions – Pope Francis and the Holy See are making great efforts for peace. Do you think that peace is still possible?

That’s a big question. And I don’t know if anyone has the answer. What is it that we can do? What do we still need to do to advance peace? This remains a big open question.