An intense - and applauded - speech by the President of the Republic of Moldova, Maia Sandu, at the European Parliament. Grief and fears over the war in Ukraine ("Crimea is Ukraine, Donbas is Ukraine, Kiev is Ukraine. And they always will be"). She then addressed the welcoming of refugees in a poor country and talked about the explosive situation in Transnistria. Economic and social reforms and the aspiration for future EU membership

The conflict unleashed by Russia against Ukraine frightens Moldova, a very poor country that is taking in refugees from the neighboring nation who are fleeing the bombings. For this reason, the path toward future membership in the European Union raises high hopes in Chisinau and a solid connection to peace and democracy, precisely represented by the EU. This is what Maia Sandu, President of the Republic of Moldova, expressed in her speech on Wednesday, May 18, in the hemicycle of the European Parliament in Brussels at the opening of the plenary session.

An unimaginable tragedy. “Here I feel among the true friends of Moldova. Allow me, above all, to thank you on behalf of all Moldovans for your constant unwavering support of Moldova and its European future. Your support has been vital in keeping” the eastern nation “on its democratic path and supporting the aspirations of our people to live in peace and prosperity.” An economist and former premier of the small Eastern European country, Sandu addressed words of esteem to the EU democracy, and then said, “Russia’s war against Ukraine seeks to put an end to these hopes” for peace and development “and sends us all a century back in history. This war was caused by geopolitical designs to reshape the region, to divide it into spheres of influence, to seize territory” from other nations. “Russia has attacked a neighboring state, just as big powers did in the past, and has unleashed an unimaginable tragedy on the Ukrainian people and the entire European continent.” 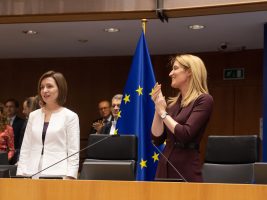 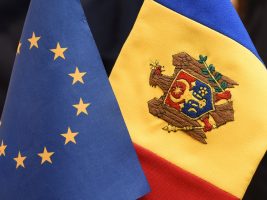 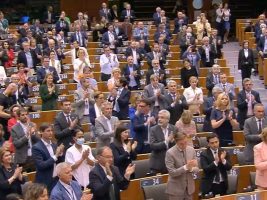 “Crimea and Donbas are Ukraine.” Sandu added, “Russia’s war against Ukraine was designed to turn Ukraine into something that nobody would want to be: a geopolitical annex of a more powerful neighbor. The Baltic states, the Bulgarians, the Hungarians, the Poles, the Romanians, the Czechs, the Slovaks and the Germans, free states today, remember vividly and all too well what this means. We had hoped that those times would never return.

Yet we all see with our own eyes the tragedies of women, men, children and elderly who lost their homes and their loved ones. We all saw crimes against Ukrainians, who did no wrong to anyone.

Moldova feels deeply the pain and the tragedy that Ukraine is going through.” “We support the sovereignty and territorial integrity of Ukraine. Crimea is Ukraine. Donbas is Ukraine. Kiev is Ukraine. And they will always be.”

“Half of the Ukrainian refugees are children.” In her speech to the European Parliament, the President was interrupted several times by long applause, with a final standing ovation. She told of the reception of refugees fleeing Ukraine: “In a matter of a few hours, our authorities started receiving tens of thousands of refugees fleeing the brutality of war. Only in a few weeks, our population of 2.6 million increased by 4 percent. Almost half a million Ukrainians have crossed our border, and around 90,000 people are still with us, hosted by my big-hearted fellow citizens. Half of the refugees today are children. We are overwhelmed, but determined to do our best to help those in need.”

Reforming the country. “In the last three decades, Moldova has had many achievements of which we can be proud,” Sandu continued. “Throughout our independent history, Moldova has been and remains a democratic country, with free and competitive elections. The freedom and dignity of our people make us a country with a strong European identity. We are working on consolidating democratic processes. We are working on countering disinformation and building a strong and resilient civil society and mass media.”

The people of Moldova “gave us a strong mandate to reform the country and bring it closer to the European Union.”

“History and our own transition experience have taught us that the sustainability of the democratic achievements is closely linked to economic development. A major challenge for us,” she said, “is to create economic opportunities for everyone, to convince our young people that it is worth trying to build a future in Moldova.” This emphasis was linked to the high emigration rate of Moldovans – almost a third of the total population – to EU countries.

“The values of the EU are our values.” Maia Sandu highlighted the reforms that have been initiated, with some difficulty, in her country, in the economic sphere, to create jobs and to bring out undeclared work, to improve social, health and educational services, to defend borders, and to achieve energy autonomy. “However, despite our achievements, we have been hit hard by a succession of crises culminating with the war against Ukraine. The country’s resources are overstretched. The socio-economic situation is difficult. The dramatic increase in energy prices is the main reason for a historic surge in inflation: 27 percent. Investments have practically stopped because of the war at our border. Supply chains have been interrupted.” Added to all this is the conflict in Transnistria, another challenge facing the country. On this matter she explains that “We remain committed to a peaceful and political resolution of the Transnistrian conflict, fully preserving Moldova’s sovereignty and territorial integrity within our internationally recognized borders.”

Sandu therefore ruled out at the moment that Moldova, a neutral country, could be drawn into a conflict.

She then again emphasized the country’s European aspirations, “We are part of Europe. EU’s values are our values. I ask you to increase EU support for Moldova – for the sake of Moldovans who want to preserve their democracy and freedom, but also for the sake of Europe – to have a stable and reliable partner and a contributor to peace” in the eastern part of the continent. Finally, the president solemnly stated, “for us, the status of EU membership is the light at the end of the tunnel in these very difficult and uncertain times.” Indeed, the EU has created “the longest period of peace in Europe’s history and can do so again.”