The director of Caritas-Spes reports on his visit to one of Kharkiv's metro stations. An underground network of train carriages and tunnels where people sleep, cook, study and where babies continue to be born despite the bombs. “A strong feeling of uncertainty for the future prevails, yet at the same time, mutual support and responsibility in these small communities offer a way forward.” “The war will not end soon with a peace agreement. It is bound to linger among us for a long time. It is feared that Europe will forget all about us, for after the initial shock, war is easy to get used to. It is our responsibility as Ukrainian Church and as Caritas to continue our service to the people for the entire duration of this conflict” 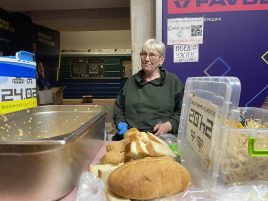 Outside, above ground, Kharkiv is a ghost town. Only very few shops are still open. All residents have left. Offices are closed. Children are no longer playing in public parks. Yet the city is still busy. But life goes on below ground, in underground metro stations: a network of underground train carriages and tunnels where people sleep, cook, study and where babies are still being born despite the bombs. Father Vyacheslav Grynevych, director of Caritas-Spes Ukraine, reports to SIR on the situation beneath the Kharkiv Metro station, which he visited on his latest mission to bring humanitarian relief and share the efforts being made by the local Caritas agency. “I was surprised to see how people have organised themselves,” he says. Upon entering the metro, people are guarding the entrance in what used to be the ticket booth. A policeman stops “visitors”, asks to see their identity cards and the reason for their entry. “They subsequently summoned a woman whom we later learned was the person in charge of the community living in that metro station.” She was chosen for this role from amongst the most dynamic individuals, possessing the skills to maintain relations and contacts with local authorities and charities. When the Russians started shelling the city, all residents flocked under the metro station seeking shelter. It was total chaos. As the days went by, they all realised that this was not going to be a temporary situation and that they had to organise themselves.

These days, the metro station is for many a city within a city. The entire metro system has become a shelter housing approximately 60 to 70 people per station. The person in charge is responsible, among other things, for keeping a register of arrivals and departures so as to avoid overcrowding or vacancies. 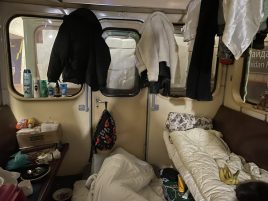 Once inside, we find a kitchen to our right. A form is displayed indicating the shifts and the number of people entitled to eat breakfast, lunch and dinner. A first-aid station on the left offers medical advice and medication. The trains – which once brought residents back and forth between the city – are no longer running. Each carriage has three entrances and a room has been created in each compartment for each family or group. Inside, inhabitants brought all they need to survive. It’s their home, and each family and group is defined by the carriage in which it is housed. “There was one very young woman, aged 22, who gave birth to her baby Victoria,” says the priest. “When she returned to the metro station with her little girl, it was as if she was going home and that girl was the youngest child born in a larger family.”

Still, there are very few children. Most young families have left. Those who remained are mostly elderly people who will not and cannot leave the city. In the underground station’s community area a small table with a computer is available for children to take turns playing video games. There is also a boy following online classes. They set up a workstation for him and whenever he has a lesson, the whole station goes silent so as not to disturb him. “The experience of war has entered their lives and will remain with them forever,” says Fr Vyacheslav.

“Our volunteers told us that the children describe the war using the words ‘bang bang’ and then, to explain the sound of the weapons, they compare it to the sound of heavy rainfall during a storm. It is not normal for a child to express himself like this.”

The various metro stations are connected to each other by means of a Viber instant messaging system whereby they communicate their needs and resources – ranging from sugar, to flour, to medicines. The exchange of goods takes place under the tunnels. It’s an underground logistics centre. They have even set up a projector and all the ‘inhabitants’ of the station vote for the film they wish to see, each evening at 8pm. At street level, the offices are closed. People are not working but they have all volunteered to clean the city or work as volunteers for various services.

Some are there because their homes were shelled, others are scared of the bombs and feel safer living in the station. Many people have arrived from bomb-stricken suburbs.

“A strong feeling of uncertainty for the future prevails, yet at the same time, mutual support and responsibility in these small communities offers a way forward,” says the director of Caritas Spes. He adds: “The war will not end soon with a peace agreement. It is bound to linger among us for a long time. There’s always a fear that Europe will forget all about us, for after the initial shock, war is easy to get used to. It is our responsibility as Ukrainian Church and as Caritas to continue our service to the people for the entire duration of this conflict. It’s easy to start a war, it’s hard to stop it. Our first concern is not just rebuilding the country from rubble, but also healing wounded hearts. Forgiveness will be a major challenge. Our gaze is fixed on the day when the war will end and people will finally be able to return home.”